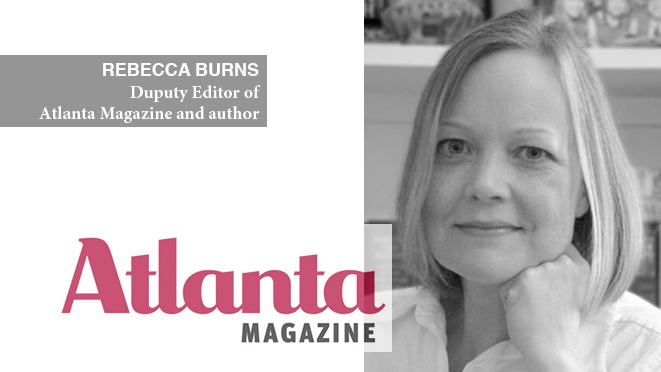 Rebecca Burns is deputy editor of Atlanta Magazine and author of three books on Atlanta history. She will present Monday, March 10 at 9:30 a.m. at the Sheraton Austin. She is a part-time magazine writing instructor at Grady College and Emory University, and she will be returning to UGA early April to teach the Digital Portfolio Blitz sponsored by the Journalism Department. Burns recently wrote two pieces for POLITICO Magazine about the recent snowstorms, “The Day We Lost Atlanta” and “How Atlanta Survived Icepocalypse II.” Her first article went viral and generated record-high Facebook shares for POLITICO Magazine.

Q: What has been a career-high moment for you over the last 15 years?

A: If I had to narrow it down to one thing, it would probably be Atlanta Magazine's National Magazine Award nomination for our April 2008 special issue on the legacy of Martin Luther King Jr. The issue, which was produced when I was editor-in-chief of the magazine, was published on the 40th anniversary of King's assassination, and looked at the current state of the city, King's hometown, through the filters of King's three platforms: civil rights, poverty rights, and anti-militarism. For me it really showed what a city magazine can do in terms of covering our city and providing deep context, and it was rewarding to have our work acknowledged by our peers. Personally, it was a particularly rewarding issue to work on; I wrote one of the major features in that issue (which led to a book contract).

Q: You appear to have a fulfilling career as both an author and deputy editor of Atlanta Magazine. What drives you to teach?

A: I love teaching for two main reasons. First, I am passionate about the craft of magazine writing in general-and longform, narrative nonfiction in particular. Teaching magazine writing allows me to share that passion with young journalists, and, I hope at least, can inspire some of them to pursue this kind of work. Teaching digital media classes helps them think about the importance of storytelling and reporting to work in new media formats and on new platforms. Second, teaching helps keep me sharp. I have found that when teaching reporting and writing, my own work improves, because I am very aware of details and craftsmanship. Also, I learn a lot from my students-about how their generation consumes and experiences media.

Q: Tell us more about the three books you have written.

A: The books that I have written focus on Atlanta history. “Rage in the Gate City” chronicles the 1906 Atlanta Race Riot, a shameful chapter in the city's history that has been woefully undocumented. “Burial for a King” is an account of the 1968 funeral for Martin Luther King Jr. staged in Atlanta, and of the behind-the-scenes efforts to maintain peace in King's hometown while riots were breaking out all over the country. The third book, “Atlanta: Yesterday and Today” is a more general history of the city, told through landmarks and locations. It's got lots of great images.

I'm working on a new book, with the working title “The Second Burning of Atlanta.” It's about the Great Fire of 1917, which destroyed a huge chunk of the city. This book, like “Rage” and “Burial,” is a narrative nonfiction work, which means that it uses the techniques of literature (plot, characters, point of view, setting, etc.) to tell a true story.

Q: Were you surprised by the responses to “The Day We Lost Atlanta” article?

A: The timing was interesting, because just that week, in the Digital Media class I teach at Emory, we had discussed the use of social media to share news. So having a piece that I wrote go viral in the way it did (this set a record for Facebook sharing for POLITICO) was surprising. In trying to figure out why there was so much response to the piece, I concluded that people in Atlanta were happy to have it to forward to friends and family in other parts of the country to explain that it was traffic and sprawl-not an inability to drive in snow-that paralyzed the city. People who lived in other cities found it interesting because they could learn from Atlanta's planning failures. Also, I think people liked that my article stepped back and provided context-there is such a rush in other media, especially TV, to jump right to a blame game and making big generalizations, not to look at the reasons behind what happens in the news.

Q: What is next on the horizon for you in terms of journalism?

A: I just finished a huge reporting project on food deserts in metro Atlanta that will come out in the March issue of Atlanta magazine, and I'm looking around for something else juicy to start reporting. But in the meantime, I am working on our special issue on the 150th anniversary of the Battle of Atlanta, the Siege, and the Burning of Atlanta. Talk about going way, way back and looking for context!