Marcus Howard is expected to graduate in May 2021. (Photo: Sarah E. Freeman)

Marcus Howard is reaching the final stretch of his doctoral degree and he can look back knowing he packed a lot into his time at UGA. 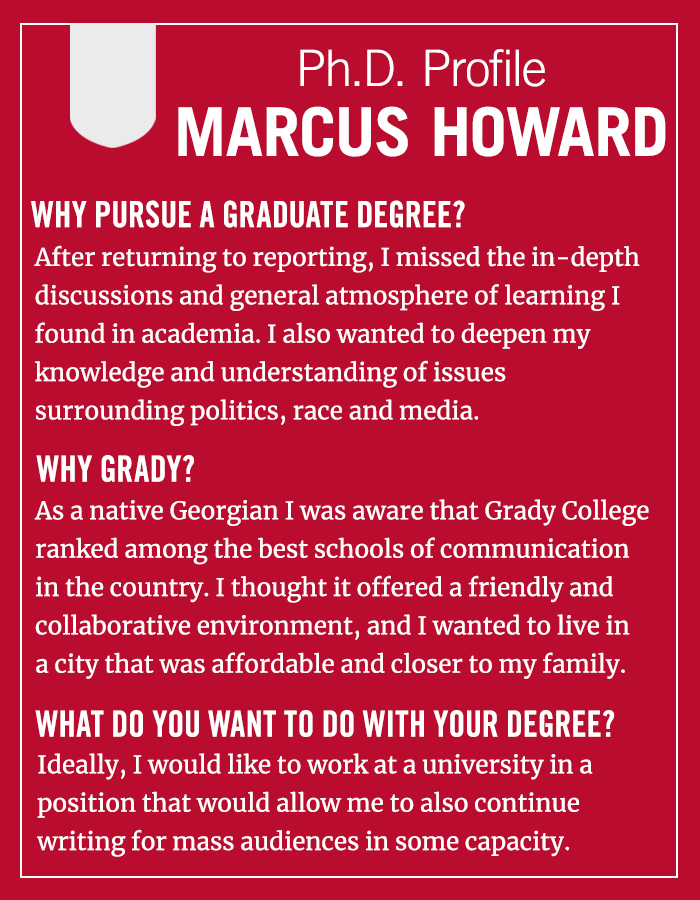 While at Grady College, Howard taught several classes including newswriting and Journalism Ethics and Diversity; he wrote a book about media literacy called “How Journalists and the Public Shape our Democracy: From Social Media and ‘Fake News’ to Reporting Just the Facts;” and he worked as a graduate assistant with the UGA at Oxford program.

“Learning from University of Oxford faculty and mentoring undergraduates has been an incredible experience,” Howard said.

Howard earned his bachelor’s degree in political science from Boston College and a master’s degree in political and global affairs journalism from Columbia University before enjoying a career as a reporter for Reuters, the Los Angeles Times and the Chicago Tribune, among others. He soon realized he missed the in-depth discussions and atmosphere that academia provides.

“I also wanted to deepen my knowledge and understanding of issues surrounding politics, race and media,” Howard continued. “Ideally, I would like to work at a university in a position that would allow me to also continue writing for mass audiences in some capacity.”

While at Grady College, his research has focused on political and international communication with an emphasis on race, culture and social movements, and it is through his teaching that he has earned a more varied understanding of his studies.

“Teaching has been rewarding because the process forced me to consider journalism from a broader perspective than what one experiences as a reporter knee-deep in it. Studying the history, concepts, great stories and future of journalism, along with students, has given me new perspectives of the profession.”

As he nears the end of his studies, he advises that students considering going back to school for a doctorate degree should seriously consider the amount of work and sacrifice involved.

“Ultimately, it’s a rewarding journey, but one not without some hardships,” Howard concludes. “Having a clear idea of what you want to study and which faculty researchers you’d like to work with are very helpful. And, having emotional support and/or an outlet for stress are invaluable.”