Diversity, Harassment and Bullying in the Media Industries

Join us for a free panel, “Diversity, Harassment and Bullying in the Media Industries: A Writer’s Responsibilities.”

Moni Basu: an enterprise reporter for CNN Digital, where she is part of a team that’s bringing narrative journalism to a brand best known for breaking news. Before becoming an online journalist, she was a reporter and editor at newspapers for 26 years. Originally from India, Basu has straddled two cultures all her life, and her stories often reflect the complexities of race, ethnicity and identity.

Refreshments will be served.

This panel is sponsored by the Grady College Standing Committee on Diversity and the MFA Program. 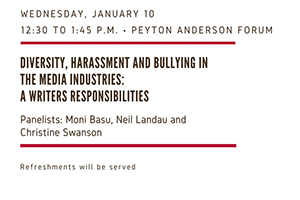