Neil Landau teaches in the M.F.A. screenwriting and producing programs and serves as the associate director of screenwriting for television at UCLA TFT.

Landau is the author of the bestselling book “101 Things I Learned in Film School “(Grand Central Publishing, 2010). Focal Press has published his new books, “The Screenwriter’s Roadmap“(2012) and “The TV Showrunner’s Roadmap“ (2014).

Details about his new book can be found here. 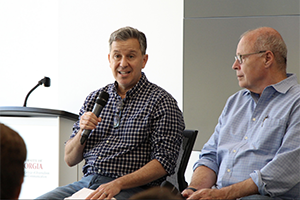