Third-year journalism major DonA Traylor-Askew is already making her mark in the world of sports media.

Why did you choose Grady and your course of study? 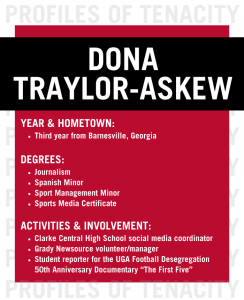 I chose to study journalism because I developed a love for storytelling while in grade school. I love talking to people and getting to know more about what makes them who they are. I also love sports and how they bring people together. The idea that I could combine the two and pursue a career in sports journalism seemed like a dream. I knew Grady had a great program and reputation for successful journalists. In addition, I knew the Sports Media Certificate program would help me to best position myself for a fulfilling career.

Tenacity means pushing through whatever comes your way and never giving up. It means setting your mind on a goal and doing whatever it takes to reach it no matter what situations arise in life that could stand in your way. Simply put, it means unrivaled determination.

In my Fall 2021 sports broadcast class, I was the producer of our last show of the year. When I first learned I would have that task, I was so nervous. It was my job to get everyone—the anchor, analysts, feature reporter, and graphics producer, etc.—all on the same page. It was the first time I had ever produced a show, but I created a new structure for the show. My classmates and I came together and pulled it off with my new plans being implemented almost seamlessly. I was very proud of myself and although I had never considered pursuing a position as a producer, this experience changed me. Now I really feel like I could do this in a professional setting.

What or who has had the biggest impact on your life during your time at UGA?

The sports media program has had the biggest impact of my life during my time at UGA. I arrived here hoping to begin building a foundation for a career in sports media, but it was really just an idea. It has only been through the experiences in this program that I have truly started to realize that I can be successful in the field. Each class and the challenges I’ve faced in them have allowed me to learn new skills that will not only be applicable in the workplace but could also give me an edge over my competition early on when starting in the industry.

What is the best piece of advice you’ve received from an instructor, mentor or family member?

I have two great pieces of advice from Professor Vicki Michaelis that I try to keep in mind with all that I do professionally. The first is “Don’t let perfection get in the way of done.” This advice has helped me to stay out of my own way when it comes to being a perfectionist. Instead of trying to find some cute way to dress up a graphic or some fun phrase to add to a sideline hit, it’s always best at the end of the day to deliver the truth of the information in a clear and concise format, and to worry about the additives later. And the second is “If you know what you don’t know, you’ll be fine.” As long as I remain aware of the areas where I can improve, I will always be working to better myself and therefore better position myself for the future.

What are you planning to do after graduation?

I hope to begin working in social media production for an NFL or NBA team in Los Angeles, Phoenix or Atlanta. I could also see myself working in sports broadcasting in some form, either as an anchor or producer.

What is your favorite app or social media channel and why?

TikTok. It is such an informal platform that even professional TikTok accounts are able to create a silly atmosphere for consumers. When NFL and NBA teams can use this form of media to make jokes about one another and it’s not only acceptable, but to be expected, I think it is great.

Where is your favorite place on campus and why?

My favorite place on campus is Sanford Stadium. I have been able to make so many great memories there with the new friends that I’ve made during my time at UGA. The atmosphere is phenomenal. And as a major sports fan, I didn’t miss a home game all year and I don’t plan to miss one next year either.

I would consider Maria Taylor to be a professional hero of mine. She also attended Grady and is having a very successful career in sports broadcasting. She is one of the younger successful Black sports broadcasters that I feel has recently blazed a trail for women like me who could follow in her footsteps before creating my own path.

What has been your proudest moment in the past year?

I was part of a small team of student reporters who worked to create “The First Five,” a documentary about the five black men who integrated the UGA football team in 1971. I didn’t realize how much work would go into the project when we first started, and I had some self doubt in the beginning because I’d never done anything like it before. However, I worked hard to give each subject a true voice when I finished my portion of the piece and when I saw what it added to the overall story, it was one of the proudest moments of my life.

#ProfilesOfTenacity: Jillian Smalls
Why did you choose Grady and your course of study? I decided to come to UGA specifically to attend Grady College. Among all the colleges I was interested in, none […]
learn more

#ProfilesOfTenacity: Armani Kardar
Why did you choose Grady and your course of study?   I chose Grady and journalism because I love to talk and tell stories. I love meeting people and learning random […]
learn more

#ProfilesOfTenacity: Riley Armant
Why did you choose Grady and your course of study?  Being that I am a COVID-19 graduate, I knew that the job market was not ideal for me. I decided […]
learn more

#ProfilesOfTenacity: Jane Congfei Lian
What does the word “tenacity” mean to you? For me, tenacity means always staying positive when facing tough circumstances or situations. The most important difference I found between human beings […]
learn more

#ProfilesOfTenacity: DonA Traylor-Askew
Why did you choose Grady and your course of study? I chose to study journalism because I developed a love for storytelling while in grade school. I love talking to […]
learn more