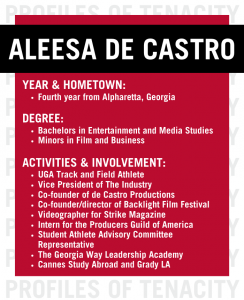 A division one athlete, fourth year entertainment and media studies major Aleesa de Castro says tenacity is all about persistence and resilience. Aleesa and her sister Cate share a passion for film, and together they founded de Castro productions and organized the first ever Backlight Student Film Festival this past spring. Aleesa serves as the vice president of The Industry, is a videographer for Strike Magazine, and she is currently interning for the Producers Guild of America.

Why did you choose your major?

I enrolled into the University of Georgia as a biology major, but I’ve had a strong love and passion for film all my life. As a freshman, I was looking to get more involved on campus and stumbled upon the entertainment media industries club, better known as The Industry. I began to meet others who shared my passion. Many of them were entertainment and media studies students who were looking to pursue a career in the entertainment industry. I was truly inspired by my peers. Watching them follow their dreams assured me that this too was a career path I could follow. I changed my major and began cultivating my career in the industry.

This past summer, I attended the Cannes Film Festival study away program. All in all, there is no other way to describe this trip than a dream. As an aspiring film producer, there was no better fit than the Cannes Film Festival. For the two weeks of the festival, my classmates and I were at the global epicenter of the film industry. We were meeting filmmakers and buyers from all over the world. We were able to grow our networks and open our eyes to a variety of careers that exist in the entertainment landscape. It was magical. Every day consisted of screening international films, attending press junkets, dressing up for red carpets, meeting talent and industry professionals, trying different French foods, and exploring the French Rivera. I look back at this experience and it almost doesn’t even feel real.

What does tenacity mean to you?

Tenacity is all about persistence and resilience. As a division one athlete, this is something that has been instilled in me; however, I also feel there is a component of giving back and looking out for others. Someone who is truly tenacious is also focused on uplifting their teammates and those around them.

Fred Rogers is someone I really admire. He had a profound effect on television and media in general. He touched the lives of millions and his messages continue to resonate with me. In his commencement speech at Dartmouth he said, “You never have to do anything extraordinary to be special.” This is something I think about often. It reminds that what is important in life is loving, acknowledging and recognizing those who have loved you and supported you, and sharing this same love with others in your life.

What is the best piece of advice you’ve received?

I’m involved with The Georgia Way, an organization that helps athletes develop their leadership skills both in sports and life in general. A great piece of advice they shared with me is that leadership is all about energy. The energy you bring onto the track, on a film set, in a meeting, and so on has the ability to uplift those around you or bring them down. I believe a strong leader believes and invests in their team.

Spending quality time with my cat and dog. Shoutout Luke and Bobbi.

What would people be surprised to know about you?

Something most people don’t know about me is that I am an identical twin. My sister is a superstar finance and entertainment and media studies major, and also my best friend. We share our love for film together and hope to eventually become producing partners. We have even founded our own production company in Athens and are currently producing a feature film!

What has been your biggest accomplishment in the past year?

My proudest accomplishment this year was co-founding the Backlight Student Film Festival. It started out simply as an idea to unite and showcase filmmakers’ work, but it quickly grew into so much more. It truly took a village to make this all happen, and it was so rewarding to see so many Grady and UGA students working together to celebrate one another.

What do you plan to do after graduation?

The one thing I know for certain after graduation is that I will return to the Cannes Film Festival. For the two weeks of the festival, I aim to work with either an agency or production company before returning to the United States. After that, my future is less certain. I will then either make the move across the country to Los Angeles to work for a studio or agency, or I will continue to grow my network here in Atlanta by working on film sets and developing content. Either way, I am certain Grady College has prepared me for my future career as a film producer.

Where’s your favorite place on campus and why?

One of my favorite places to meet on campus is the new MFA room located on the first floor of Grady, or the “the fishbowl” as we like to call it. The fishbowl is where I run into all my peers before class. We catch up, share what we are watching, what we are working on and so on. It lightens my day seeing them all and demonstrates what a supportive community the EMST program is.

Profiles of tenacity highlight our exceptional students who have determination, grit and qualities of leadership. Fill out this form to nominate a student.

#ProfilesofTenacity: Alander Rocha
Alander Rocha is a second year masters student with a concentration in health and medical journalism. Currently, he is the health editor for The Red and Black and he is […]
learn more

#ProfilesofTenacity: Justin Nemetz
Fifth-year journalism major Justin Nemetz is passionate about the visual medium. He has been fascinated by film and television from a young age and he has a minor in film […]
learn more