Solyee Kim is expected to graduate with her doctoral degree in 2022. 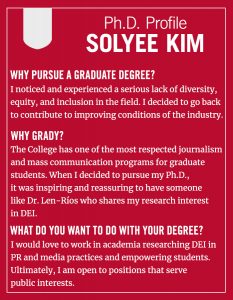 “Immigrants are some of the marginalized groups in the practices and research of journalism and mass communication,” Kim, a native of South Korea, said of her area of study. “By highlighting these experiences in my research, I would like to share some of the vibrancy and dynamics of those communities that are far from monolithic.”

Last Fall, Kim’s research about how South Korean restaurants promote their restaurants in the U.S. was recognized by the Association for Education in Journalism and Mass Communication. The paper, “Communicating the Culture Through Korean Food Between Authenticity and Adaptation,” won third place in the student paper competition in the Minorities and Communications Division.

“This was my first time attending an academic conference and having my work presented as the first author. The award was a great reminder and encouragement to continue on this path.”

Her research used the Circuit of Culture framework that she learned about in Dr. Acosta-Alzuru’s qualitative research course to examine representation, production, consumption, identity, and regulation of the restaurants. Kim explained that she has always enjoyed exploring food culture.

“Since I first came to the U.S., this became more significant to me because food plays a critical role in understanding the different cultures that make up this country and my identity here. I spend a lot of time on the weekend in areas known for vibrant immigrant communities such as Buford Highway and Duluth to shop for groceries or to eat (although I have not been able to do that as much as I would like to due to COVID-19). In a highly multicultural country such as the United States, those immigrant communities play vital roles by providing economic, political, and cultural structures to many lives. I believe that food is imperative to understand those communities and their relationships with other communities.”

Kim said that it is a team effort to conduct research like this.

“I have so many staff, faculty, colleagues, and students to thank at the College and beyond,” Kim concluded. “It takes a whole village to get a Ph.D. In my case, the village might be a global one. I would also like to share my special thanks to my advisor, Dr. María Len-Ríos, and the advising committee members—Dr. Karen Russell, Dr. Bart Wojdynski, and Dr. Glenna Read—for always encouraging me and providing creative and invaluable insights.”

Before returning to Grady College to pursue her doctorate degree, Kim worked at a public relations firm in Atlanta and interned with a wide range of non-profit organizations including the United Nations Non-Government Liaison Service in New York, the International Rescue Committee in Atlanta, the Korean Federation of UNESCO and the Special Olympics. Prior to working in public relations, she worked as a freelance translator and interpreter traveling to the United States and the Middle East for various companies.

She earned her master’s degree in journalism and mass communication with a concentration on public relations from Grady College and a bachelor’s degree in German language and literature with a minor in political science and diplomacy from Chung-Ang University in Seoul, South Korea.