What made you want to study Entertainment and Media Studies?

My entire life I’ve been in awe of the power of media, specifically film and TV. As I contemplated what program of study I wanted to pursue at the University of Georgia, it seemed as if Entertainment and Media Studies would be the best fit to help me unlock the magic behind creating stories on-screen that have the power to change people’s lives.

How has Grady influenced your time at UGA? 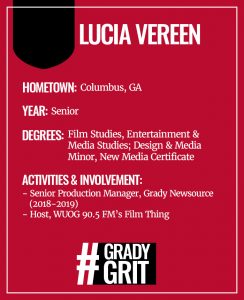 I’ve been involved with Grady the entirety of my time here at UGA. I started volunteering with Grady Newsource as a crew volunteer in the first semester of my freshman year, was promoted to a manager in my second semester and have been in and out of Grady ever since. Grady has effectively shaped my time here at UGA as I made connections through my volunteering with Grady Newsource, my subsequent promotions and other projects I was able to work on because of my classes in EMST and work with Newsource.

I’m motivated by my love for my family, for those I’ve met here at UGA who are my family away from home and my desire to move through this life with them and support them as we all continue to grow. I’m also motivated by my deepest desire to put stories out into the world, whether they be through fiction writing, film, or television, and representing those who rarely see themselves in the mainstream.

You’ve worked at WUOG in several different positions. What have you learned from those roles and how have they helped you prepare for your future?

Working at WUOG as an Operations volunteer, a DJ and then a talk show host has allowed me to learn and practice audio equipment skills in the context of live audio broadcast as well as discover dozens of new songs for myself and those in the Athens area. During my time as a co-host for “Film Thing” for the last two years — WUOG 90.5 FM’s source for all things film — I’ve developed a deeper relationship with the people who make the arthouse theatre Ciné downtown what it is and support us as an underwriter, allowing us to give a free pair of tickets out during every show and attend early screenings when our schedules permit. Being one of the hosts for “Film Thing” has also allowed me to further sharpen my analytical skills when it comes to looking beyond the magical veil of mass media to inspect texts as the sum of their parts rather than just the whole given to us, the consumers, as an end product.

If you could go back, what would you tell yourself before you began taking Grady classes?

Knowing what I know now, before I started my EMST degree program, I would take the chance to be honest with myself concerning how challenging it truly is in the beginning, and I would want others to do the same. I would give myself the mental space I needed by not taking a full schedule and try to find peace of mind through recognizing that it is a learning experience rather than a make or break test of your character or value as an individual. Although Grady classes are classes like any other at this university, they serve the dual purpose of teaching you practical and theoretical skills as well as teaching you about yourself. They inform your outlook on your future career, your spot in the industry or maybe even outside of it and what it means to you to create art for yourself and others.

You recently helped produce a new faculty recruitment video. What was that process like?

I was recently tapped to help produce the faculty recruitment video “We Are Grady: The Future of Media is Here.” One day, I saw an email from Dr. Hamilton (the head of the EMST department) in my inbox detailing an opportunity to write a short spot about faculty recruitment for Grady college. I was extremely grateful for the opportunity to write more as well as to write something more commercial instead of fictional and narrative-based. Soon after I signed on to be the writer, I began workshopping drafts of the script with Dr. Kohn, one of the faculty in the EMST department. We soon got it to a place that we both felt represented our mission as a college and the tone we wanted to strike. After I returned to the States from the Cannes Film Festival Study Abroad Program, I worked together with Dr. Len-Ríos to gather the necessary resources to produce the video. I hand-picked my own team from a network I made through my studies in EMST at Grady, worked with Grady faculty as the cast, rounded up extras from all over — and we got it done! It was a very rewarding experience to work with so many people within Grady to make something for the college itself, and I’m proud of the result of my own hard work and that of so many others.

Who is your professional hero and why?

My professional hero isn’t just one person, but many. I find inspiration in the success and words of black women from any field. Toni Morrison gives me strength as a black woman who writes, even in her passing. Ava Duvernay and her mission to use her platform to enfranchise women of color in above-the-line positions gives me strength and inspiration. The light that shines from within comes from so many and offers so much solace — Tracee Ellis Ross, Rihanna, Solange, Beyoncé. I see professional black women succeeding in the world and I am inspired. I am moved. I am awed. And I’m ready to join them.

What is your favorite place on campus?

My favorite place on campus is the walkway that connects Sanford drive, the Miller Learning Center and the back of the Fine Arts Building. It’s always busy, but there’s something about it that offers the opportunity for a moment of peace and solace among the hustle and bustle of a campus with tens of thousands of students. The generous shade provided by the trees, the way the light shines through the leaves, bouncing off of your skin, as if in gentle greeting. It’s the perfect place to be outside, but not suffer too much under the Georgia sun.

What is the last show you binge-watched? Would you recommend it?

The last show I binge-watched was the first season of True Detective on HBO starring Matthew McConaughey (a very important fact for me). It was one of the most satisfying and fulfilling shows, from both the writer and viewer perspectives, that I’ve seen in a really long time. The creators, Nic Pizzolatto and Cary Joji Fukunaga, wrote and directed the entirety of the first season, respectively, and delivered a visual and psychological tour de force. Although we’re following a pair of detectives, what we’re really doing is engaging in a study of the human mind. It’s a thrill to watch, and I recommend it to anyone and everyone.