The following was written for UGA Columns and UGA Today.

As a faculty member, Bart ­Wojdynski derives satisfaction from seeing the switch flipped within the minds of his students. 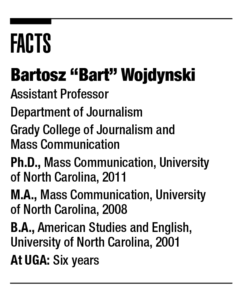 “I love watching students develop interests they didn’t know they had,” he said. “My goal is to try to meet students at the intersection of what they want out of a class and where they might want to go in the future.”

Coincidentally, that is exactly what happened to him in a research methods class at the beginning of his master’s program that led to his career. The lightbulb moment happened when he realized he would not have to choose between being a journalist or a social scientist, but instead could study the social science of how people understand journalism and other digital media.

Since then, Wojdynski has been on a fast track, teaching digital design and media research classes while conducting experiments to understand the role of design and attention in how consumers’ attitudes are shaped by media content. In ­addition to the ­coding classes where he teaches journalism students content creation in HTML, CSS and JavaScript, he also teaches courses in data visualization, digital media design and media psychology.

Whether he is teaching a traditional in-person class or one that’s online, a format he has worked with since his first faculty position at Virginia Tech, he said he feels fortunate to be teaching classes in his wheelhouse.

Much of Wojdynski’s research involves conducting eye-tracking studies on digital news and advertising, which follow and measure how people view on-screen information within fractions of a second. He was first exposed to eye tracking in 2008 while at UNC assisting a faculty mentor with a grant exploring how online news consumers used content like story carousels, audio slideshows and homepage hyperlinks. The main goals were to establish how readers recalled content and whether they were persuaded.

Wojdynski maintained an interest in eye-tracking research throughout his doctoral program and his two years as an assistant professor at Virginia Tech, but it wasn’t until he started teaching at the University of Georgia that he was able to conduct his own eye-tracking research and work with doctoral students on their own projects.

Wojdynski said that the move to UGA was appealing not only because of the reputation UGA has, but also the strong communication research and Ph.D. program at Grady College. The fact that Grady was willing to investigate what would be involved in establishing an eye-tracking lab was an added benefit.

With support from the college and university, Wojdynski started the Digital Media Attention and Cognition Lab in his first semester at UGA. Since then, Wojdynski has been mentoring doctoral students in designing media research experiments in a highly collaborative, teaching hospital-type environment.

Wojdynski, who was recently promoted to associate professor with tenure, is equally energized by using his research and that of others to inform his teaching.

“I try to show my students how humans look at content and what messages they come away with,” he said. “Whether I am teaching designers, writers or videographers, I hope they come away from my class with the desire to bring a little more of a human-centered, evidence-based perspective to the content they create.”