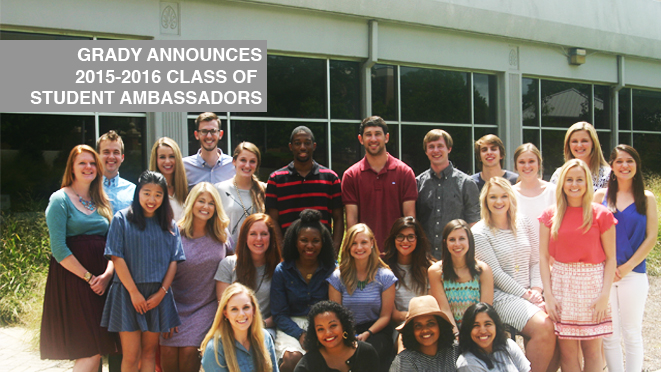 Grady College is pleased to announce its 11th class of student ambassadors, continuing a tradition of leadership and service that displays students’ academic dedication and Grady pride. Grady Ambassadors are a diverse group of students committed to presenting a positive and lasting image of the college while bringing a little bit of fun to every event they attend.

“Being a Grady Ambassador has taught me more than I could have imagined the past two years that I’ve been involved,” said senior advertising major Sarah Dossani. “It has allowed me to connect with my peers and build relationships with influential people in my career path, but most importantly it has given me the chance to represent a school that continually supports its students and provides endless opportunities for their success.”

This year, the Grady Ambassadors are thrilled to bring the college’s centennial year to a close with several events taking place during homecoming weekend, Oct. 15 – 17. Ambassadors will have the opportunity to connect with their predecessors at an ambassador reunion dinner on Friday night. Saturday, they will mix and mingle with other students, alumni, faculty and friends of the college at a homecoming tailgate on the Grady lawn before the Dawgs face off against Mizzou.

For the remainder of the year, the ambassadors will have a strong presence at most college events and give back to Grady by leading tours, facilitating guests and interacting with alumni, speakers and prospective Grady College families.

“Having the ambassadors attend events is a great asset to Grady,” said Karen Andrews, ambassador adviser and Grady’s director of special events and student leadership. “Alumni and special guests find it so meaningful that we have students who are willing to sit down and talk about the experiences Grady has provided them. We have an incredible group of students and I’m very excited about the year ahead.”