About: Shira Chess teaches courses in media studies and media writing. Her research focuses on digital media studies with an emphasis on gender and gaming.

Dr. Chess’ research interrogates the intersections between gender studies and video game studies. In particular, she has written extensively on games that target women audiences. Additionally, she has researched several other topics in digital media including research on “slenderman” memes and pervasive gaming such as the Google game Ingress. Her research has appeared in Journals such as Critical Studies in Media Communication, New Media & Society, Feminist Media Studies, and Information Communication & Society.

How to: Play Like a Feminist in 2020 Shira Chess

Description: “You play like a girl”: it’s meant to be an insult, accusing a player of subpar, un-fun playing. If you’re a girl, and you grow up, do you “play like a woman”—whatever that means? In this provocative and enlightening book, Shira Chess urges us to play like feminists. Furthermore, she urges us to play […]

Abstract: Sexual assault affects one in four women in the United States. Recent studies show that college is the time when sexual assaults are most likely to occur. Prevention involves educating audiences to identify unsafe situations from a variety of perspectives – from potential victims, to bystanders, to perpetrators. In short, this project seeks to […]

Abstract: “Casual game” is an industry term that is often used derisively or dismissively—it is a catch-all meant to indicate a style of play but is often deployed like a genre. The term increasingly infers a discursive list of game genres: Match-3, invest/express, hidden object, and puzzle games all fall under the purview of what […]

Abstract: Kim Kardashian has received much attention for her media empire, including her game, published by Glu Mobile. The game’s premise plays a role in what I characterize as “Feminine Play Style,” an emerging mode of video games that functions through assumptions about an idealized vision of the woman player and her relationship with leisure […]

Abstract: When we discuss games, as a culture, the games under discussion are often presumed almost always a “core” (or “hardcore”) games. However, video games are change rapidly. The market has been shifting for years with increased revenue and game play occurring in casual and mobile gaming. Revenue streams have are now flowing from digital […]

Read More
This is What a Feminist (Game) Looks Like. Shira Chess Paper to be presented at the International Communication Association Annual Conference, Washington, D.C.

As video games become an increasingly mass medium — not intended for niche audiences but deployed with different genres, styles, and platforms — it is an apt time to rethink the role of feminism in gaming. Feminism, as it is deployed in this paper, considers feminism as discursive, exceeding “women” as its subject, per Judith […]

Stardew Valley, on its surface, appears to be yet another invest-express farming game; players grow crops, tend to animals, mine, fish, and do other idyllic tasks that make it almost feel mundane at first. Yet, as time passes in the game, the player has opportunities to engage in relationships with non-player characters that reveal dark […]

Abstract: This chapter offers a “diffractive” consideration (Barad 2003) of posthumanist and cyberfeminist theory, masculinity studies, and research on gender and gaming, that views digital play between straight white men as a form of homosexual contact via cyborg bodies, one that is mediated by the material and semiotic apparatuses of gaming, but no less real […]

Abstract: In this article, I consider the role of affect in the popular app game Neko Atsume. Neko Atsume is a “cat collector” game where players leave food and toys out for cats. The game’s success is strongly linked to its ability to deploy a kind of affect on players – it relies entirely on […]

Abstract: When we discuss games, as a culture, the games under discussion are often presumed almost always a “core” (or “hardcore”) games. However, video games are change rapidly. The market has been shifting for years with increased revenue and game play occurring in casual and mobile gaming. Revenue streams have are now flowing from digital […]

Dr. Chess’ teaches courses that focus on both understanding and creating digital and traditional media. Prior to teaching in Grady College, she taught at Miami University of Ohio and worked as a game developer and web designer. 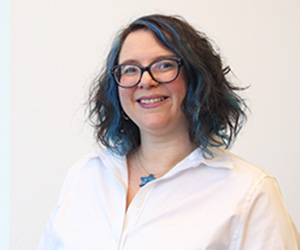 "Why Are Video Games so Sexist?" via the New Republic