All are invited to join us for a reception and complimentary screening of “Grady Greats: a conversation about the enduring values and power of journalism.”

Discussions ranging from how journalism has changed over the years, to diversity in the industry and the most important journalism skills were featured in a panel filmed in front of a live studio audience on Jan. 22, 2019.

Robin Hommel (ABJ ’96), senior broadcast producer of “The View,” helped coordinate the panel as the executive producer of Grady Greats, with Parker Middleton, Dodie Cantrell-Bickley and the students of DiGammaKappa who served as associate producers. The panelists addressed an audience of Grady College students, alumni and friends in the ABC studios where “The View” is broadcast. 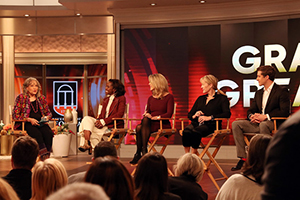