Grady College assistant professor Booker T. Mattison is screening his film Bosniak. The production was a collaborative effort with many UGA faculty and staff.

Bosniak summary:
Amir, a white Bosnian Muslim teenager, is forced to immigrate to America to live with his estranged father after his mother is killed by ISIS in his home country. Amir’s father wants him to assimilate and take advantage of the privilege of being white in the United States. However, Amir discovers that he has more in common with African-Americans than whites because of the discrimination he faces as a Muslim in America. Amir meets an African-American teen who shares his name. The two Amirs form an unlikely friendship and discover the value of peace and brotherhood. 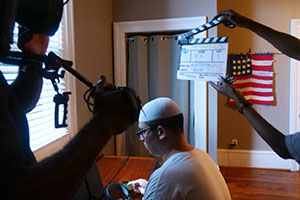