Patricia Curtin will be honored on April 29 with the 2022 Distinguished Alumni Scholar Award. "Grady set me on a path to be successful in what was of interest to me, which has served me well throughout the years," Curtin said. (Photo: courtesy of Pat Curtin)

All our honorees and inductees will be honored at Grady Salutes: Celebrating Achievement, Leadership and Commitment on April 29, 2022 at Athens Cotton Press. Please visit our Grady Salutes registration webpage for more details.

Patricia A. Curtin (MA ’92, PhD ’96) is this year’s recipient of the Distinguished Alumni Scholar Award, honoring a graduate for excellence and sustained contributions to scholarship in journalism and mass communication education. 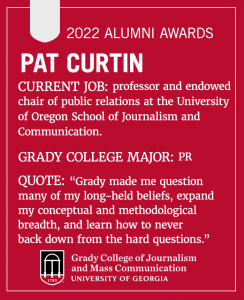 Curtin is a professor and endowed chair at the University of Oregon School of Journalism and Communication. After receiving her Ph.D. at Grady in 1996, she took a tenure-track position at UNC-Chapel Hill, where she received early promotion and tenure to associate professor and directed both the master’s and the doctoral programs. She then received an endowed chair and early promotion to professor at the University of Oregon.

Her research encompasses cross-cultural public relations, public relations history, and development of critical/postmodern approaches to public relations theory. She has won top research awards at international conferences and is the author of two books and numerous peer-reviewed book chapters and journal articles.

Following is a brief interview with Curtin:

Grady College: What does receiving the Distinguished Alumni Scholar Award mean to you?

Pat Cutin: The short answer is a lot. The long answer is that I came to Grady’s graduate program in my late 30s as a working mother of two. You don’t put yourself in the position of working full-time as a master’s student, raising tweens, and doing a graduate program unless you’re pretty motivated. My motivation was to get the best education I could so that I could demonstrate how the stories we tell, and how we tell them, make a difference. My research agenda has never been trendy, but instead has been driven by trying to give voice to disenfranchised groups and create shared understandings that allow us to develop better relations among diverse peoples. Part of telling those stories is to put them in the larger socio-political-economic context of the times. Grady gave me the broad knowledge base and tools to be able to do that. To have Grady recognize the work that I’ve done over the years to ensure we hear those voices in context is validation not only of what I’ve tried to accomplish but of the broad diversity/equity/inclusion perspective that Grady values, as well. My current work is centered on how the U.S. public relations profession developed in relation with organized labor. Grady’s recognition of my work is an immense honor at this point in my career.

GC: Why is a cross-cultural perspective important?

PC: The research study I’m proudest of to date is one I completed while a Grady doctoral student in Dr. Wally Eberhard’s Media and War class. It told the story of the Japanese-American troops in World War II—how the media portrayed them in order to promote U.S. government objectives and how the media-savvy 442nd Regimental Combat Team used the media to advance its goals of recognition and acceptance. After the piece was published, I was contacted by a Japanese-American soldier who had served in the war who told me I “nailed” the story. In 2005, 10 years after that study was published, I sailed as an instructor on Semester at Sea, the experiential-learning study abroad ship that takes students to 10 different countries to experience comparative cultural insights. The cross-cultural term embraces a variety of levels, including not just international boundaries but also those of cultures within the United States, which are important to recognize and embrace. I think any good communicator needs to authentically connect with an audience—the ability to empathize, to see others’ perspectives, to realize the commonalities that unite us as well as the rich diversities that complement us and fully realize our humanity and potential.

GC: What are your favorite memories of your time at Grady College?

PC: When I think back to my time at Grady, it’s the people who stand out. Grady attracts top scholars from around the world, and the opportunity to learn from them is immense and priceless. My professors, across the board, exposed me to a rich variety of theoretical and methodological perspectives, and my own research is so much better and stronger for that. Grady professors didn’t give us a hammer and tell us the world was a nail. We were given a toolbox and the knowledge from which to choose the appropriate tool for the job. Additionally, Grady attracts an amazing cohort of graduate students to its competitive program. I also fondly think of the staff, who supported even lowly graduate students and made us feel part of the larger Grady family. My fellow students pushed me, supported me, and remain my close friends after all these years. I am honored beyond words to be sharing the awards ceremony this year with one of those people, Dr. Carolina Acosta-Alzuru, who is receiving the John Holliman, Jr. Lifetime Achievement Award.

GC: What advice do you have for someone considering getting a Ph.D.?

PC: Pick a program not for the one professor you want to study with simply because they study just the precise area you think you want to. Instead, be open to having your intellectual horizons widened to include areas you never considered before. Pick a program for its breadth and its rigor. Pick a program for the foundation it will give you to explore new areas of interest and for its ability to push you to become the best scholar you can be. Grady made me question many of my long-held beliefs, expand my conceptual and methodological breadth, and learn how to never back down from the hard questions.

Editor’s Note: the above has been edited for length and clarity.

Grady Salutes 2022 honorees celebrated at in-person event
There was laughter and tears, but mostly a sense of gratitude for the opportunity to come together for an in-person Grady Salutes celebration April 29, 2022. The event attracted nearly […]
learn more

2022 Fellowship Profile: Alan Massengale
Alan Massengale’s Twitter profile provides a glimpse into his character: “In the sports broadcasting world my moniker is — ‘The Legend’ — which means I am old, but well loved. […]
learn more

Alumni Award Profile: Patricia Curtin
This is one in a series of profiles about our 2022 Alumni Award honorees and Fellowship inductees.  All our honorees and inductees will be honored at Grady Salutes: Celebrating Achievement, […]
learn more