Chad Mumm, co-founder and chief creative director of Vox Media, is a UGA 40 under 40 honoree. (Photo: courtesy of Chad Mumm)

Mumm was named one of Forbes 30 Under 30 in Media in 2016 and one of Variety’s 30 Execs to Watch in Digital Entertainment in 2016. He won an Emmy Award in 2021 as one of the creators for a YouTube Originals documentary called “Creators for Change on Girls’ Education with Michelle Obama.”

Mumm graduated from UGA majoring in telecommunications (currently Entertainment and Media Studies) and religion. He was involved as a video shooter for NewSource, competed in Movie Fest and participated in the Oxford study abroad program (what he said was a “fundamental life-changing summer.”)

Before Vox, Mumm was a video production freelancer in New York and a producer at AOL.

Mumm has been an active participant in the Grady College Alumni Board for the past several years.

The following are excerpts from an interview with Mumm. They have been abbreviated for space and clarity.

Looking back at your time at Grady, is there anything you wish you had done (classes you had taken, skills you would have liked to have learned, clubs to be involved with) that would help you with what you are doing today?

I wish that I would have taken an internship in LA when I was in school. I got an internship, but decided to stay in Athens and instead work on a short film with a professor because I wanted to do more hands-on production at the time. I was like really focused on being a director, and I just wanted to be around physical production and not be in the office reading scripts. I wish I would have done the LA internship because it would have given me a lot more exposure to what I do now at an earlier stage.

What would you tell your 20-year-old self?

It’s okay to be patient and it’s okay to take some time for yourself. My whole life I had assumed that I would get out of college and immediately get a good job, start a career and then get married and have a family. Instead, I moved to New York and couldn’t find a job right away.

Also, it’s okay to ask for help. I didn’t really ask for any help. I kind of felt like it was on me to do it. I’m sure that there were professors who would have made introductions and at least would have helped out a little bit. Don’t be afraid to ask to ask for help, especially in the entry level for introductions.

What was the most memorable class you took while at Grady College?

The most impactful class that I took was a media theory class that was taught by Paul Hillier, who now teaches at the University of Tampa. It was the first class that I ever took that really taught popular entertainment, but from like an academic perspective. So much of my experience with college to that point was very academic, which meant you have to be serious. It was the first time I realized that you can learn from popular entertainment, and it was a class that included topics ranging from blockbuster movies to hit TV shows, but analyzed them from a craft perspective.

What accomplishment are you most proud of?

I am most proud of proving how I could translate digital creativity and a sort of scrappy creator-driven mindset. That you can go from that to winning Emmys and making shows for HBO and Netflix and be part of that world by not having to go through the same channel to get there like many of my peers who started in the mail room or worked as an assistant. I always wanted to be doing stuff and making things.  I just like went where people would let me make stuff. It’s neat to sort of be able to be in an industry where I always saw myself and meaningfully make work that audiences and creative communities are very excited about.

Personally, the project I am probably most proud of is this golf show that I’m doing for Netflix right now just because it was just sort of a six-year long development project that I never gave up on. It doesn’t have a name yet, but it’s an all- access documentary series following professional golfers…like the “Formula 1: Drive to Survive” series, but for golf. I started working on it about six years ago and somehow was able to make it happen. It died 500 times in that six years and I just refused to let it go.

No Laying Up (a podcast about golf)

One job-related tool you can’t live without?

Favorite place you have been? 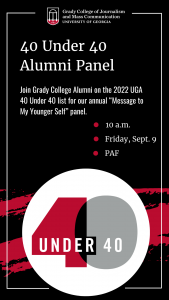 rady College alumni honored in 2022 include:

We will welcome the honorees back to Grady College on Friday, Sept. 9 for a “Message to My Younger Self” panel. Please join us in the Peyton Anderson Forum (room 238) at 10 a.m. A light breakfast will be offered.

2022 in Review: Alumni Spotlight
Editor’s Note: This is part of our six-part series highlighting stories produced by Grady College in 2022. The features include stories in each of the following subjects: Student Successes Faculty […]
learn more

40 Under 40 honorees visit Grady College
Five Grady College graduates named to the UGA Alumni Association’s 40 Under 40 class attended the “A Message to my Younger Self” panel on Friday, Sept. 9, offering insight to […]
learn more

40 Under 40 honoree profile: Kevin Schatell
We are proud to recognize Kevin Schatell (ABJ ’16) as an honoree of the UGA Alumni Association’s 40 under 40 class. Schatell is an Emmy-winning producer for NBC’s TODAY show. […]
learn more

40 under 40 honoree profile: Chad Mumm
We are proud to recognize Chad Mumm (ABJ ’08) as an honoree of the UGA Alumni Association’s 40 under 40 class. Mumm is co-founder and currently chief creative officer of […]
learn more