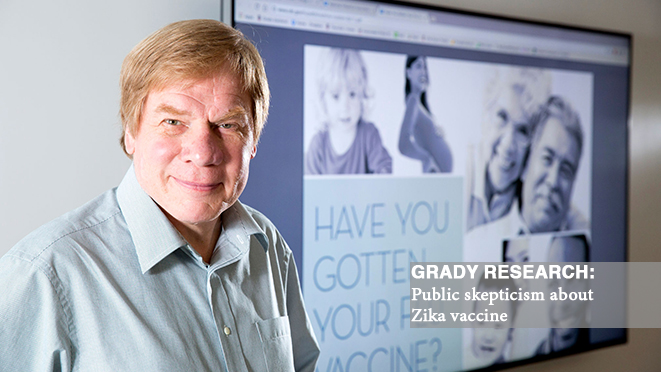 Research conducted by Glen Nowak (pictured above, Maria Len-Rios and Michael Cacciatore, found that that two of five respondents were not interested in taking a vaccine for Zika, if one were offered.

As scientists race to create a vaccine for the Zika virus, new research from the University of Georgia suggests almost half of Americans wouldn’t be interested in getting the shot even if public health officials recommended it for them.

Only one in three people in an October 2016 nationally representative survey said they would be willing to get a Zika shot if one were available and recommended. More than two out of five respondents said they would not be interested in getting a Zika vaccine, and another quarter were undecided on the question.

One possible explanation for people’s hesitancy to accept a future Zika vaccine is the newness of the vaccine, said Glen Nowak, the lead researcher and director of the Center for Health and Risk Communication in UGA’s Grady College of Journalism and Mass Communication. The center focuses on health and risk communication-related research, teaching and service.

Less than a quarter of respondents in the survey said they would trust a new Zika vaccine. Conversely, three out of four people said they trusted in the tetanus shot’s effectiveness, and just slightly under half of Americans trust in the seasonal flu shot to be safe and effective.

Initial reluctance among the public to embrace a new Zika vaccine could pose challenges for vaccine manufacturers and public health officials.

“For things like Zika, Ebola and dengue fever, it would be very helpful to have safe and effective vaccines,” Nowak said. “But there needs to be consumer interest and demand to make vaccine research and development investments worthwhile. It is often not enough to have a recommendation to use a vaccine. Public health officials and health care providers need to educate people about the value and benefits of receiving the vaccine so that people for whom it is recommended actually get it.”

Formulating a recommendation for a mosquito-transmitted disease like Zika would likely be difficult because almost all currently recommended vaccines are for diseases that are primarily transmitted from person to person, Nowak said. Additionally, since the vaccines are still in the early stage of development, scientists don’t yet know how a Zika vaccine would be administered or how many doses people would need.

“It’s not likely that a vaccine for a mosquito-transmitted illness would simply be added to the childhood or adult vaccination schedules,” he said. “Rather, it is more likely such a vaccine would be recommended for people who live in Zika-affected areas or people who travel to such areas. That said, Zika can be transmitted by people to other people and mosquitoes can travel in unpredictable ways.”