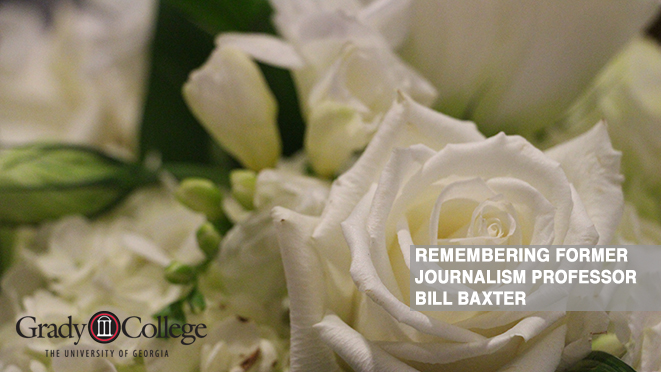 It is with sadness that we learned about the death of Bill Baxter, former professor of journalism at Grady College in the late sixties and seventies.

“Everything Dr. Baxter did, he did with excellence and high standards,” said Emily Prather Smith who worked with him in the 1970s.

Smith worked in the Business and Placement Office, which handled camera checkout at that time. Since photojournalism was a course that Baxter taught, he would frequently stop by checking on the equipment.

“Whenever he came into the Business and Placement Office, he was always focused on his students and wanting the best for them,” Smith said.

William (Bill) Spiers Baxter, August 6, 1919 – April 7, 2016 lived 4 varied and adventurous lives: rural boyhood in Delhi, Louisiana; service in the U.S. Army during WWII and in the Korean Conflict; university student and faculty member at Ohio University, at Sanford University, and at the University of Georgia; and active and philanthropic-filled retirement in Athens, Georgia.

During WWII, he was among U.S. troops who liberated prisoners from the Dachau Nazi death camp and was awarded the Bronze Star for heroism. During the Korean Conflict, he served on the senior staff of Brigadier General John Eisenhower. He was promoted to full colonel and attended the Command and General Staff College at Fort Leavenworth, graduating first in his class and was awarded the Pershing Award as distinguished graduate.

Bill took advantage of the GI Bill of Rights and earned three degrees: BA and MA from LSU and PhD in Mass Communications from the University of Iowa. He became a member of the journalism faculty at Ohio University in 1955. From 1962 to 1967, he served as professor and head of the journalism department at Samford University in Birmingham, and in 1967, he came to UGA's College of Journalism as professor and head of graduate studies.

He recalled, with his famous smile, “In 1972, I was a judge in the Miss Alabama Contest.” After his retirement from both the University of Georgia and as Full Colonel of U.S. Army Reserves, he was active in many fields in Athens. He served as president of Happy Squares and was on the Georgia State Square Dance board. He was foreman of the Clarke County grand jury, volunteered at the Athens/Clarke County Public Library and at UGA's Hodgson Concert Hall, and founded the Athens Bend Track Model Railroad Club. He was a lifetime member of the board of directors of the Athens Council on Aging where he founded the annual “Railroad Days” and which awarded him their distinguished service award.

Bill will be remembered by his many friend and colleagues for his delightful sense of humor, his Love of his family, his engaging smile, his compassion for everyone he met, and a wonderful; friend. Bill was preceded in death by his first wife Doris. He is survived by his wife Clairelis, his children Sharon Batdorff (Jon) and Earl Baxter (Ann), two grandsons, and 3 great-grandchildren; stepchild Catherine Franklin Neiner, Thomas Franklin, Julie Franklin King, Elizabeth Franklin Hawkins (Michael) Michael Franklin (Becky), 15 step-grandchildren, and two step-great-grandchildren.

In lieu of flowers, if you wish to honor Bill, please send a donation to the charity of your choice.