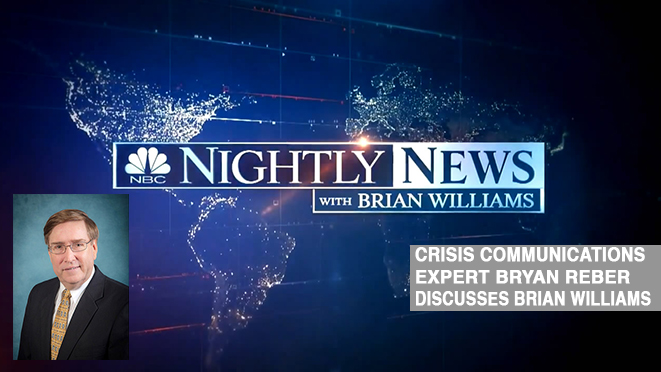 Reber can be contacted to comment on corporate strategy responding to this crisis and others at reber@uga.edu or 706-247-4153.

The late “CBS 60 Minutes” reporter Mike Wallace once said, “If there's anything that's important to a reporter, it is integrity. It is credibility.”

This truism is being reinforced as we watch “NBC Nightly News” anchor Brian Williams and the NBC News Division deal with the revelation that Williams has, at best, “misremembered” and, at worst, intentionally lied about a battlefield situation in Iraq a dozen years ago. Integrity and credibility are surely hanging in the balance for both Williams and the NBC news team as they roll out their crisis communication strategies.

Williams and the NBC team have engaged in crisis communication with mixed results. On Feb. 4 Williams replied to the Facebook critics on the NBC page, admitting, “You are absolutely right and I was wrong. In fact, I spent much of the weekend thinking I'd gone crazy. I feel terrible about making this mistake, especially since I found my OWN WRITING about the incident from back in '08, and I was indeed on the Chinook behind the bird that took the RPG in the tail housing just above the ramp.” On the same day he made an on-air apology for “misremembering” the war incident. But the problem didn't go away.

Williams reportedly wrote an email to the NBC news staff on Feb. 6. He told them he would be taking a break from the anchor desk for an unspecified time. Also on Feb. 6, NBC news president Deborah Turness announced via email to employees that there would be an internal investigation. Other crisis communication and management tactics included Williams canceling an appearance on David Letterman's “Late Show” where, in 2013 Williams regaled Letterman with the embellished version of the Iraq story. To directly reach perhaps the most affected public (beyond NBC news staffers), Williams did an interview with the “Stars and Stripes” newspaper, which was reported and posted in both audio and transcript format on Feb. 9.

Then, on Feb. 10, NBC News took a dramatic and decisive move, suspending Williams for six months, without pay, pending an internal review. Turness wrote in an internal memo, “This was wrong and completely inappropriate for someone in Brian's position.” Chief executive of NBC Universal Steve Burke said in a statement, “By his actions, Brian has jeopardized the trust millions of Americans place in NBC News. His actions are inexcusable and this suspension is severe and appropriate.”

Within a week of Williams' on-air confession and apology, he is in crisis limbo. While NBC's strong and relatively quick response will likely preserve the network news division's integrity and credibility, it is hard to see how Williams can return to his former stature. There have been accounts surface from members of the NBC team and soldiers who were present. Some supported the more dramatic versions of the Williams story, but most have not. And then there are the neuroscientists and memory experts who have been suggesting research points to the real likelihood that Williams did truly misremember. But these hardly trump the implicit lack of faith NBC showed in their six month, unpaid suspension of Williams.

Nevertheless, if other matters of fibbing by Williams don't surface — there are rumors that his reporting in New Orleans following Hurricane Katrina may be suspect as well — he may weather this storm and return to NBC news. The mix of attempts to be open and the internal search for the facts may help Williams retain some highly visible position at NBC. If he is exonerated in the internal investigation and the ongoing reporting by competitors he may be able to regain the lost trust over time. Crises are dynamic, changing hour by hour. If there are no more skeletons, Williams may, indeed, regain his integrity. But it will take some level of exoneration and lots of time.