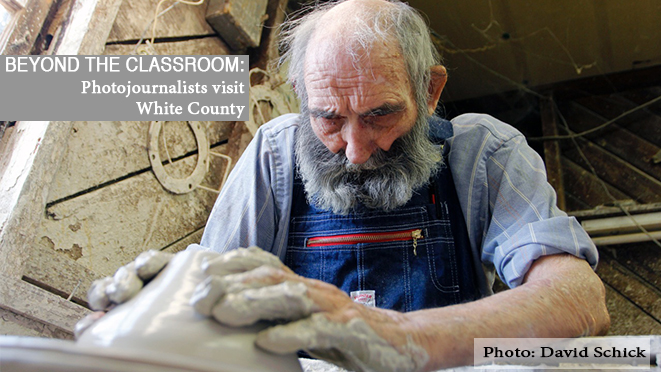 While some college professors are guided by the notion “it’s my way or the highway,” Mark Johnson, senior lecturer of photojournalism at Grady College, is not one of those teachers.

“It is critical for the students to hear another point of view,” says Johnson about one of his guiding philosophies of having professional photographers volunteer as mentors during the weekend.  “Hopefully, they will reinforce what I have taught the students, but in new ways.”

It’s for this reason that Johnson packs up his students every semester for an out-of-classroom experience.  Each fall, the photojournalism students capture the Petite Le Mans auto racing, and in the spring, the advanced photojournalism students spend a weekend in rural Georgia.  Previous trips have featured regional destinations including Morgan, Walton and Elbert counties.  This year, Johnson convened 16 students and nine professional photographers and descended on White County in early March.

Prior to the trip, students were encouraged to make an additional trek to White County to scout stories that they could photograph during the weekend workshop. Most who made the extra trip returned with solid leads for follow-up, however, the biggest lesson of the weekend was the first one — what seems like a great lead may easily implode.

Several students had early story ideas fall by the wayside when the big weekend finally arrived.  One of those students was Taylor Sutton, a fourth-year journalism student from Woodstock, Ga., who is specializing in visual journalism.

Sutton had travelled to White County in early January and developed a story line around a gentleman who carves bowls by hand.  However, when he arrived for the weekend workshop, the artist was called into his other job and didn’t have time to work with Sutton.

“I was freaking out a little bit,” admitted Sutton when he found out the weekend could be a waste.  He walked around and decided to gather his thoughts over lunch, when he stumbled upon a bakery.  After a lengthy conversation with the owner, who himself was an amateur photographer, Sutton realized his new story was right in front of him.

Sutton took on the bakery as a story arriving there at 5 a.m. both Saturday and Sunday morning as the bakers were starting to make the bread, and staying until noon as they finished.  The focus of the project evolved from one of highlighting the bakery, into one featuring the bakers.

“After I spent a little bit of time with him (the owner) and his bakers, I do feel really connected with them,” Sutton explained, “because, at that point they are not bakers, they are people, but I need to show and tell their story of how they are bakers and why they are bakers.”

Steve Hill slides a sheet full of fresh-from-the-oven rolls into a cooling rack at Hofer's Bakery and Pastry Shop in Helen, Ga., on Sunday, March 2, 2014. Hill is well known for his breads and rolls in the state of Georgia. (Photo: Taylor Craig Sutton)

Working with his professional editors, one who was an expert in technical applications and the other who focused on story ideas and editing, Sutton came home with lessons ranging from controlling backgrounds and how to better frame his images, to connecting with the subjects and finding common ground.

“The biggest take away for me is how encouraged I felt leaving White County on Sunday morning,” Sutton further explained.  “One of the professionals who was my editor told me he thought one of my images was the best one of the weekend, so that made me feel really great,” said Sutton.

David Schick, a fourth-year journalism student from Conyers, Ga., could relate to previous story lines falling through. When he was forced to abandon his pre-identified story, he found a visual treasure through talking with a hotel clerk who connected him with a family in the pottery-making business.  For generations, Meaders family members have hand-crafted southern folk pottery that typically retails for $500 to $1,500.  When Schick met 19-year-old potter Tyler Meaders, he introduced the student photographer to the entire family including the patriarch, Edwin, who was celebrating his 93rd birthday that weekend.

“It was a really cool weekend and I made a lot of good connections,” Schick said of his experiences.

The biggest lessons learned were different for Schick.

“The technical aspects are a lot more difficult than I thought they were initially, Schick continued.  “I thought I had a good grasp, but there is always more to be learned and relearned.  I don’t feel so competent.”

Working with the mentors is the biggest lesson of all.  Nine professional photographers including newspaper photographers, editors and independent photojournalists provided lessons during the weekend.  The professional feedback was a mix of positive and negative comments, but Schick admits to learning more from the ‘tough love’ comments than from the praise.

“It pushes you to get to point to get beyond what you are comfortable with,” Schick said of his experience working with criticism.

“They broke me in a good way and built me back up in a positive way,” explains Beech of her experience.   “My editor told me I was shooting too much and I should be more deliberate.”

Customers are in and out of The Barking Lot dog groomers, even after dark in Cleveland, Ga., on Saturday, March 1, 2014. There is no leaving work until every dog is finished, no matter how late it gets. (Photo: Brenna Beech)

Beech’s editor taught her to shoot with a purpose and deliberately get what she needed.  She learned to compose a picture and set up for the shot, but wait for the moment.

“I heard his voice in my head,” Beech said.  “I was able to start focusing on the story and channeling it into one thing.  It was real-world experience packed into the weekend.”

The weekend is a learning experience not only for the students, but for the professionals, as well.

“I love it,” summarized one of the mentors, Minla Shields a former editor at The Atlanta Journal Constitution.   “I am so invigorated by the students and I love seeing their work.”

Shields agrees that the biggest lesson of the weekend is the one that came early on.

“The biggest challenge of the weekend for the students is the same thing they will face their whole lives — they need to do their homework,” she explains.  “They think they have stories, but then they fall through due to no fault of their own.  It’s a good lesson because it happens all the time.”

At the end of the day, it’s all about working in a real-life setting outside the classroom and being exposed to other teachers.

“What Mark does is really valuable for the students and is great opportunity for me, too,” Shields concludes.  “I get a real kick out of it.”