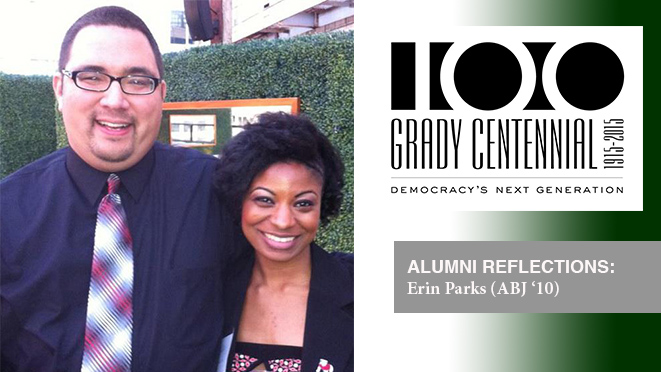 In the weeks leading up to the Grady College Centennial Weekend, April 16-19, we’ll feature a guest blog post authored by a preselected alumnus/alumna. For ways in which students, faculty, alumni, donors and friends can share Grady College memories and photos in honor of the centennial year, please visit grady100.uga.edu

I first heard about Grady College my sophomore year of high school. One day in April of 2004, four students came to my journalism class to visit. They were older, tall, witty, and full of confidence. Immediately following, everything I did was aspirational-I wanted to be them. I wanted to know what they knew.

I was born and raised in Athens, Georgia, so the University of Georgia was never far away. I saw red and black everywhere I went. To be or not to be… a Bulldawg shouldn’t have been the question, but it was. In full disclosure, I thought I wanted to be a Trojan.

What I found out, the reason for my uncertainty, is that you can’t learn about the University from seeing a ‘G’ on a T-shirt. When someone says they bleed red and black, it’s not because they bought it. It’s because they came to the UGA and found home. They found people they love like family and a place that will always be open to them. What I found, is that the ‘G’ is really about giving.

After I was accepted into the University of Georgia, no matter what classes I had during the day, I would end up in Grady’s Drewry room. It was cozy, yet always buzzing with over-caffeinated students. After I was accepted into my major at Grady, my bi-weekly visits became daily visits. It became my living room, and I became one of those over-caffeinated students.

The Drewry room is where I usually met my “aunts,” Karen Andrews and Diane Murray. They would always have an entertaining metaphor or some helpful life anecdote for me. I ate in the Drewry room a lot. I heard the “journalism is hard with no immediate rewards” speech at least ten times from Cecil Bentley. Short of making a cot behind the law bookshelf, I lived there.

As a Grady Ambassador, I followed the example of selflessness that surrounded me. Very rarely did a Grady professor send their TA to sit in for their office hours; they were there. I never heard “that’s not my job” from Grady staff when I needed help. So when it was my time to meet high school students in the Drewry room for college tours, I gave. When we were asked to put on a benefit for a local Athens charity, I gave. When we were asked to explain the Grady Facebook page to alumni, I gave and I smiled. I loved every minute that gave and I would do it all over again. Giving is a Grady tradition.

You learn AP style, you learn how to put together a news package, you can even learn how to build web pages. However, a Grady education goes beyond the fundamentals. At Grady, we do. Learning how to give all of yourself to a project, and then pick yourself back up after it’s been torn apart is the lesson that keeps on giving. This is why Grady grads win Emmy Awards and deliver groundbreaking news.

The know-how that you can’t find in textbooks is at Grady, and the confidence in the ‘G’ is not sold in stores. This is what the four students that visited me that day knew. It’s what I know now. It’s what I say to anybody who listens.

Author Bio
Erin Parks is a 2010 graduate of the Grady College, where she majored in Telecommunications. She also received a degree in Sociology. After graduation, Parks moved to New York City where she worked on film and TV promotional projects for HBO, TVLand, and NBC Sports. She currently freelances as a Digital Media Consultant in Denver, CO, specializing in social media content creation and promotions. She is a member of the Grady Young Alumni Council. Follow her on Twitter @eparks and join the centennial conversation using #Grady100.

How to celebrate a centennial: recommit, reconvene, re-engage by Brittney Haynes (ABJ ’09)

Lost and Found at Grady by Susan Percy (ABJ ’66)

A nod to the professor by Ashley Callahan (ABJ ’04)