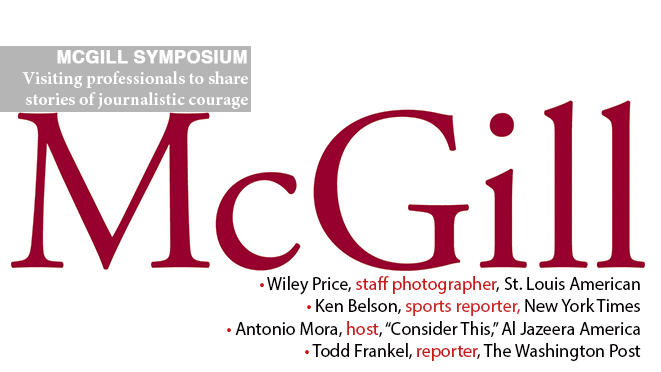 Leading journalists from across the U.S. will gather Oct. 22 at the University of Georgia to consider what journalistic courage means and how it is exemplified by reporters and editors.

The setting is the 8th annual McGill Symposium from 9 a.m. to 3 p.m. in the Richard B. Russell Special Collections Library, according to John F. Greenman. Greenman, co-director of the McGill program, is a professor at the Grady College of Journalism and Mass Communication and Carter Chair in Journalism.

The McGill Symposium brings together students, faculty and leading journalists to consider what journalistic courage means and how it is exemplified by reporters and editors.

The McGill Symposium is not a public event. Limited seating is available to Grady students and faculty.

Price has been covering events in Ferguson, Missouri, following the shooting of Michael Brown by police officer Darren Wilson. The session he will lead is “Ferguson, Missouri: When conflicts come home.” Senior Lecturer Mark E. Johnson will moderate the session.

Belson, who covers the NFL for the Times, will discuss “The NFL Beat: Exposing the ills in America's favorite sport.” Professor Vicki Michaelis will moderate the discussion. Michaelis is the John Huland Carmical Distinguished Professor of Sports Journalism.

Mora will discuss “The Courage to ask tough questions.” Professor Carolina Acosta-Alzuru will moderate. Later that day, Mora will present the 36th McGill Lecture, a public event at 4 p.m. in Room #250 of the Zell B. Miller Learning Center.

Frankel, who returned September 1 from reporting the Ebola story in West Africa, will discuss “Face-to-Face with Ebola: A reporter's perspective.” Professor Patricia Thomas will moderate. Thomas is the Knight Chair in Health and Medical Journalism. At 4 p.m. on Oct. 23, Frankel will discuss his reporting at a public lecture in the UGA Chapel.

This is the eighth McGill Symposium. The first was in 2007.

For more than 35 years, the McGill program has brought significant figures in journalism to the University of Georgia to help us honor Ralph McGill's courage as an editor.

McGill, while editor and publisher of The Atlanta Constitution, was regarded as the “conscience of the south,” using the newspaper's editorial pages to challenge segregation in the 1950s and 1960s. McGill was awarded a Pulitzer Prize in 1958 for “long, courageous and effective leadership.”

About Grady College
Established in 1915, the UGA Grady College of Journalism and Mass Communication offers undergraduate majors in journalism, advertising, public relations, digital and broadcast journalism and mass media arts. The college offers two graduate degrees and is home to the Peabody Awards, internationally recognized as one of the most prestigious prizes for excellence in electronic media. For more information, see www.grady.uga.edu or follow @UGAGrady on Twitter.