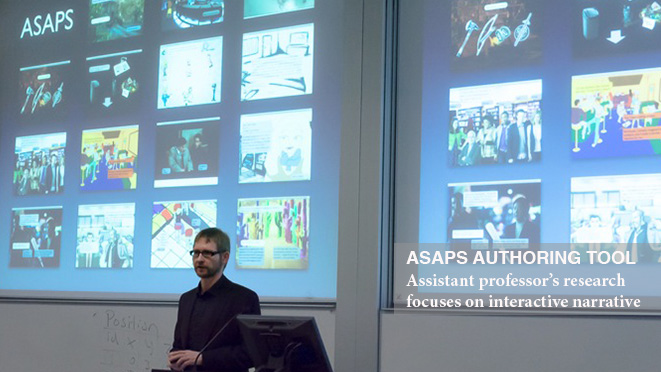 Think about each decision you make over the course of a day. How does one decision lead to the next and then to the one that follows? Seemingly, there is an infinite number of outcomes, each dependent on a pattern of choices. That’s the concept that University of Georgia researcher Hartmut Koenitz studies through digital interactive narrative.

“What I’m talking about is a narrative that’s dynamic, that can adjust to your actions as a user, as the audience,” explained Koenitz, an assistant professor of mass media arts in the Grady College of Journalism and Mass Communication.

Interactive narrative isn’t an altogether new concept: oral storytellers throughout history have molded their craft based on any number of variables, he said. But digital media has the ability to alter a story arc in a very different way.

“Digital media makes it possible to create a narrative that can react automatically and really reflect what a user does in a virtual world,” he said.

As a PhD student in Digital Media at the Georgia Institute of Technology nearly a decade ago, Koenitz began building an authoring tool called the Advanced Stories Authoring and Presentation System (ASAPS) for the purpose of creating and studying the internal structure of interactive narrative works. Since, he’s also developed a playback engine compatible with Windows, Macs and, most recently, iPads.

“The advantage of having my own authoring tool is, first of all, I can add functionality and react to ideas coming from users,” he said. “But I can also use it for research by looking at aesthetic and pragmatic aspects, compare the structures, or investigate questions of the overall form, such as genre. Having full access means I can really deeply analyze everything that goes on, something that is usually not possible when analyzing commercial products.”

More than 100 interactive narratives have already been created using ASAPS, many of which were made by students in the Grady College, where Koenitz has taught since 2011.

Users of ASAPS select and combine various atomic narrative units, or “beats,” to build their own interactive stories. Beat types include static, flexible and procedural elements.

“There’s no preconceived idea of a structure in the system, and that’s important for me,” Koenitz said. “I’m interested in what kind of structures can come out if I just give people building blocks…the whole idea is to give people ways to play and to experiment.”

Depending on a creator’s choices, each work can have a very different look and feel, ranging in visual style from hand-drawn to photographic, depicting everything between a horror narrative in the 1950e to a surrealist knowledge test.

One of the most extensive creations thus far, The Ship, is comprised of 370 beats and was made by a student over the course of a semester.  It revolves around the story of a character suddenly appearing on a ship and having to uncover the plot step by step, Koenitz explained. Only slowly does the player learn that she was put there by a mischievous god in a battle for mystical ferry to the afterlife.

Interactive narrative has a wide range of uses that extends beyond video gaming for entertainment value. The technology can be adapted for educational uses in narrative training scenarios.  It can be also used in simulators to measure performance or teach skills.

One such example is a student project called Wild Things aimed at teaching young children healthy eating habits.  It was created by a group in a class Koenitz taught in the New Media Institute, which is housed in Grady College. A player selects from a variety of foods and sees how each snack choice impacts the child character. For choosing the healthier option, like picking water over soda, the player is rewarded.

Koenitz travels internationally giving presentations about the theory and practice of digital interactive narrative and demonstrating ASAPS.  Professors at universities in countries around the world including Denmark and Singapore have begun using the software in their instruction.

In addition to its application to higher education, Koenitz recognizes that ASAPS and the works created by it have some commercial appeal.

Last spring, he and fellow members of the Games & Narrative Group, a team of international researchers, launched in the iTunes store their first app called Breaking Points.  Built with ASAPS, the free app for iPads follows a female protagonist’s daily routine, allowing a player to make choices for her which result in different endings to her day.

“Breaking Points is a narrative about a young women unhappy about her daily routine. The player can make small changes and see how these decisions accumulate and change aspects of her day. The work is an exploration of choices and consequences, of the concept of chaos theory and alternate life paths. The point is in exploration, not in winning or losing,” Koenitz explained. He plans to release other titles through iTunes in the future.

A point of future expansion for ASAPS is in “physical narratives” that will use sensor information (GPS/location, accelerometer, etc.) as triggers and switches to propel stories forward. “The multiple lives of Walter B.,” an artwork by Koenitz accepted for the ArtChi workshop in Seoul, will be the first incarnation of this new addition.

To view and play a selection of interactive narratives made with ASAPS, visit http://advancedstories.net/.  Educational institutions or individuals interested in accessing the ASAPS software should email Hartmut Koenitz at hkoenitz@uga.edu.