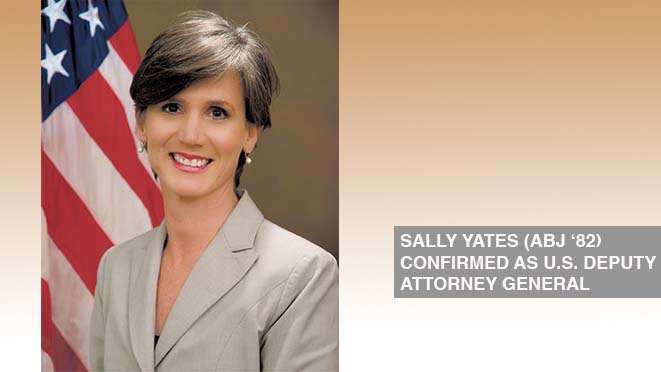 Nominated by President Barack Obama late last year, Yates has been serving in an acting capacity in the No. 2 post at the U.S. Department of Justice. She replaced Deputy Attorney General James M. Cole.

“The university takes great pride in the significant accomplishments of our graduates,” said UGA President Jere W. Morehead. “We congratulate Sally Quillian Yates on her outstanding career and wish her well in this important role for our country.”

Georgia Law Dean Peter B. “Bo” Rutledge issued the following statement: “I applaud the Senate’s decision to confirm Sally Yates. She is a dedicated public servant and a brilliant lawyer. She represents the very best about the University of Georgia School of Law.”

Before becoming U.S. attorney for the Northern District of Georgia in 2010, Yates was first assistant U.S. attorney and chief of the Fraud and Public Corruption Section of the office, prosecuting white-collar cases. She also served as the lead prosecutor in the prosecution of Olympic bomber Eric Rudolph. Prior to joining the U.S. Attorney’s Office, she practiced law at the Atlanta office of King & Spalding, where she specialized in commercial litigation.

While in law school, Yates served as the executive articles editor of the Georgia Law Review.

She earned her undergraduate degree in journalism from UGA in 1982.

“Grady College, where Sally Quillian Yates got her start, beams with pride as one of its alums ascends to the deputy attorney general post in the Department of Justice,” said Charles N. Davis, dean of the Grady College of Journalism and Mass Communication. “Her appointment underscores the many varied career paths that our graduates take—the college long has produced some of Georgia Law’s finest—and we are singularly proud of this Double Dawg’s accomplishments.”