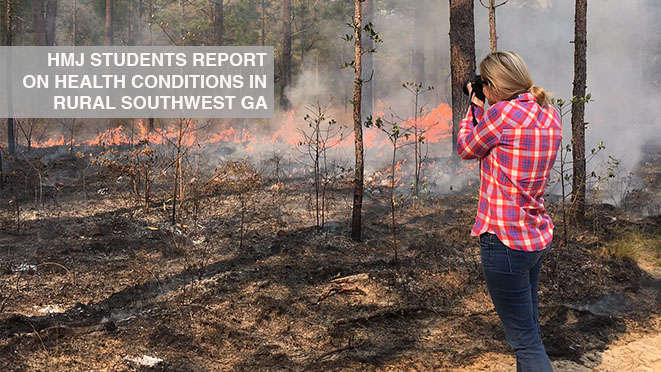 Nine graduate students in the Grady College Health and Medical Journalism program traveled to the southwest corner of Georgia in late March to report seldom-told stories about health and healthcare in a region where poverty and poor health are endemic.

From March 20 to March 24, the students fanned out by car to pursue new stories on a beat they had been following all semester. While one student went to Sumter County to cover teen sexual health, others traveled to Moultrie to report on childhood obesity or to Albany to interview low-income elders. They aimed to uncover stories often overlooked by mainstream Georgia media.

The trip was organized and led by Grady College’s Knight Chair in Health and Medical Journalism, Patricia Thomas, and Georgia Health News CEO and editor Andy Miller. Aware of longstanding health challenges in southwest Georgia, the two conceived of an intense field reporting expedition that would yield a series of feature articles. The articles are appearing now in Georgia Health News and in some of the nearly 40 Georgia newspapers and television stations that partner with the news service. .

The trip was funded with travel support made possible by the Ford Foundation, supplemented by the Broun Family Fund, which supports experiential learning for Grady students that broadens their professional horizons.

In a moment Thomas described as “serendipitous,” graduate student Elizabeth Fite and GHN Editor Andy Miller arrived at a nursing home shuttered by federal authorities at a pivotal moment.

“Former employees of Abbeville Healthcare and Rehab were arriving one last time – to pick up their final paychecks,” Miller and Fite write in the first installment of the series.

Miller and Fite noted the “emotional toll” of the closing on the patients, employees and community as a whole. In a region like southwest Georgia, where amenities are scarce and rural communities exist in a different sort of world than what we know, the closing of a local nursing home has an even greater impact on those whose lives depend on it, Fite discovered.

Other articles in the series cover topics such as combatting food insecurity in farm country and the shortage of physicians available to impoverished patients.

Although everyone was supposed to be back in Athens on the fifth day of the project, Lauren Baggett stayed late in Moultrie to watch food unloaded and packaged for distribution the next day. She and classmate Leigh Beeson got home late that night.

Confronting the real and painful stories of rural and impoverished Georgia residents, and learning about innovative ways to help, made the time in southwest Georgia eye-opening and rewarding.

“There are so many stories that no one bothers to tell in areas like rural Georgia because they’re unpleasant,” Beeson said. “But those are often the stories most worth telling.”