Kelly Krincek was named the UGA Student Employee of the Year by the Career Center for her work in the Dean of Students Office (Photo: Dorothy Kozlowski (ABJ '06), UGA Marketing and Communications)

This story was originally published on UGA Today as part of its Amazing Students series.

Kelly Krincek, a graduating senior majoring in entertainment and media studies from New Jersey, was recently named Student Employee of the Year. Krincek is the student media coordinator at the Office of the Dean of Students. She was recognized for her web and video production skills as well as her “infectious energy, enthusiasm, initiative and joyful spirit.”

Current employment:
I am the student media coordinator at the Office of the Dean of Students at UGA.

Family ties to UGA:
My grandfather’s brother and wife both graduated from UGA.

Top university highlights, achievements, awards and scholarships:
My four years at UGA have been some of the most rewarding, fun and crazy in my life. I have met amazing people, learned from incredible faculty, and have grown personally, academically and professionally. One of the clear highlights of my experience here at UGA though has been working as the student media coordinator at the Office of the Dean of Students. I create video content (e.g., student staff spotlights to Orientation videos), photograph campus events, help update/maintain the dean’s office website, and assist with crafting newsletters to freshman students. This position has allowed me to form a deeper connection with UGA and become more involved with campus events, including Gettin’ Down with Dean, Dogs for Dawgs, and countless University Union events. 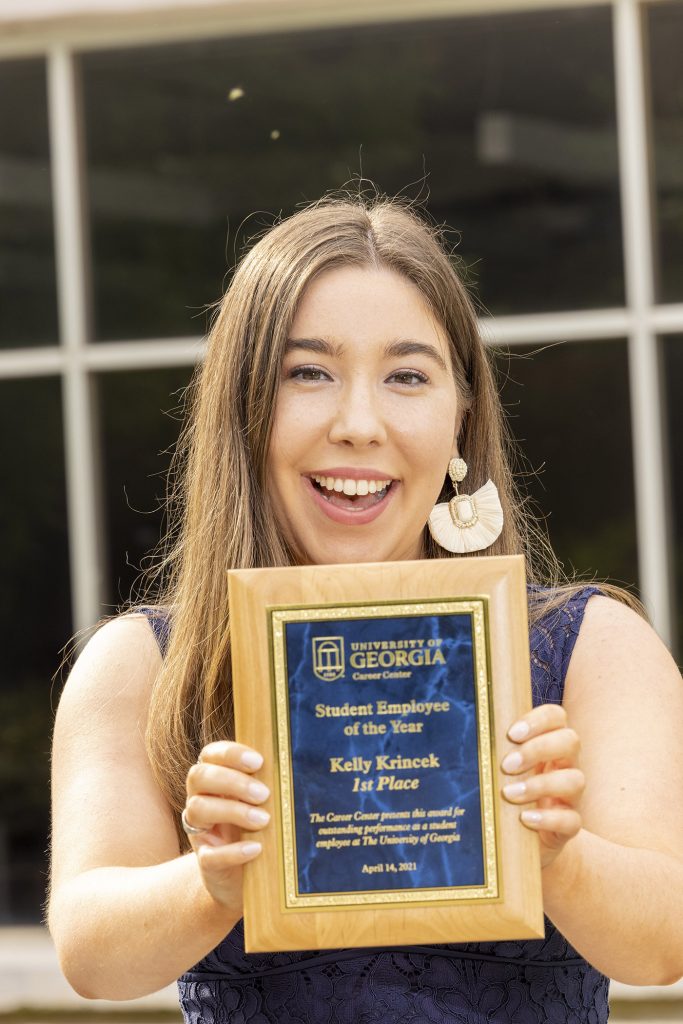 Undergraduate student Kelly Krincek with her Student Employee of the Year plaque. (Photo by Dorothy Kozlowski/UGA)

How did you decide to come to UGA?
I chose to attend UGA for a few reasons. As an only child coming from a relatively small town and high school, I wanted to go to a bigger university. I also knew I wanted to major in entertainment and media studies so Grady College of Journalism and Mass Communication’s high ranking and its connection to the Peabody Awards were both big draws for me. And I am a huge sports fan so UGA having a D1 program was an added plus. The moment I knew that I would come to UGA though was during an admitted students day visit. I walked from the Arch all the way through campus and up to Milledge Avenue. I was able to see how beautiful the campus was and knew UGA was where I was meant to be. 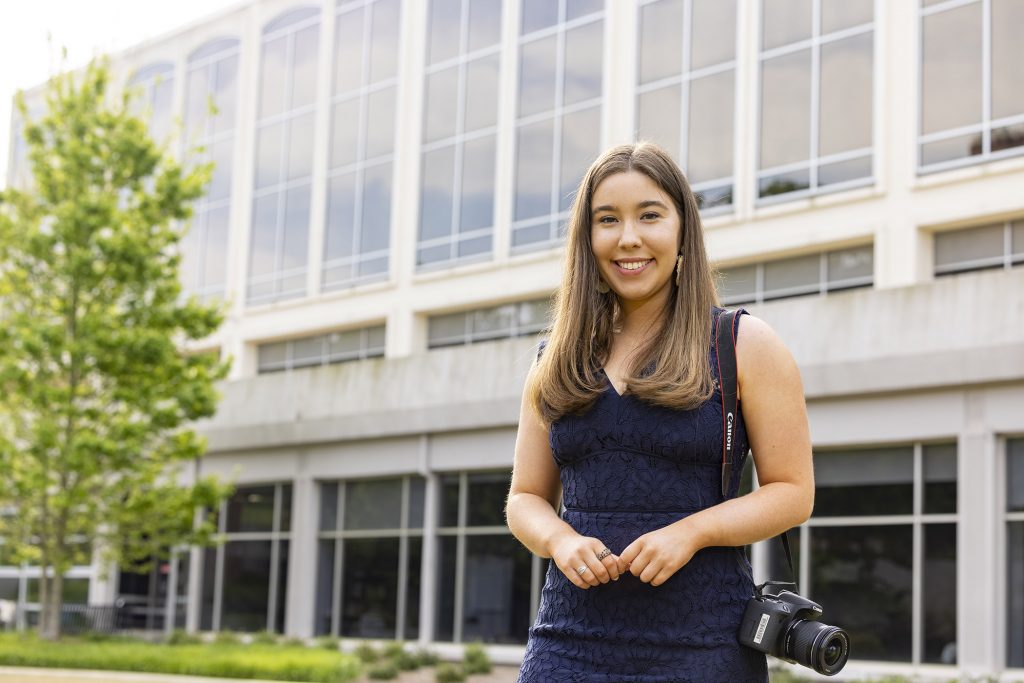 Kelly Krincek came to UGA in part for the sports. “I could relay to my family the NY Yankees box score on TV before I could even read a word,” she said. “Obviously, my love of sports started early.” (Photo by Dorothy Kozlowski/UGA)

The one UGA experience I will always remember will be:
The UGA Notre Dame night game during my junior year. It was the 21st of September and the Redcoats played Earth, Wind and Fire’s “September” during half time. We were all just screaming the lyrics and I remember the band all rushing toward the student section at the end. On top of that it was a night game, and they debuted the new red stadium lights, which had the crowd going crazy. The energy in the stadium was insane, for sure one of the most intense and electric games I have been able to attend. Oh and of course, we won … Go Dawgs!

My favorite thing to do on campus is:
Walking through the main sections of campus. No matter what time of year North Campus is stunning, so normally I will get off the bus at an earlier stop than I need to and walk through there. I also love walking around Tate Plaza since there is always something fun going on outside. And of course, stopping by Sanford Stadium is a must, especially with the new access point from Sanford Drive. So much of UGA’s campus is centrically located, which to me shows how connected our community is.

When I have free time, I like to:
Read, hang out with friends, go on day trips, or to try out new restaurants in Athens. Even after four years, I feel like I have barely explored all there is in and around Athens.

My favorite place to study is:
Herty Field. I love studying outside and Herty Field is the perfect spot since it is quiet, peaceful and has gorgeous views. With Herty Fountain as a backdrop, the sound of water is constantly filtering through the area making it a relaxed place to focus and get work done. Grab a bench or lay out a blanket and you’ll be set — 11/10 recommend.

If I could share an afternoon with anyone, I would love to share it with:
Ryan Reynolds. Ever since I saw him in “The Proposal,” I have been a huge fan. His social media is hilarious (highly recommend checking out his Twitter/Insta because he’s always cracking jokes or being super sarcastic). He seems like just a happy guy and whatever we ended up doing would be off the wall and kind of crazy but totally fun. And if I’m lucky maybe we’d run into his wife Blake Lively along the way.

If I knew I could not fail, I would:
Move to Los Angeles and pursue a career in Hollywood as an editor or producer.

If money was not a consideration:
I would love to go on an all-inclusive trip across Europe. I have been to Italy with my family and really loved it! It would be amazing to go back and see all the places we missed in Italy, then travel across Europe by train. 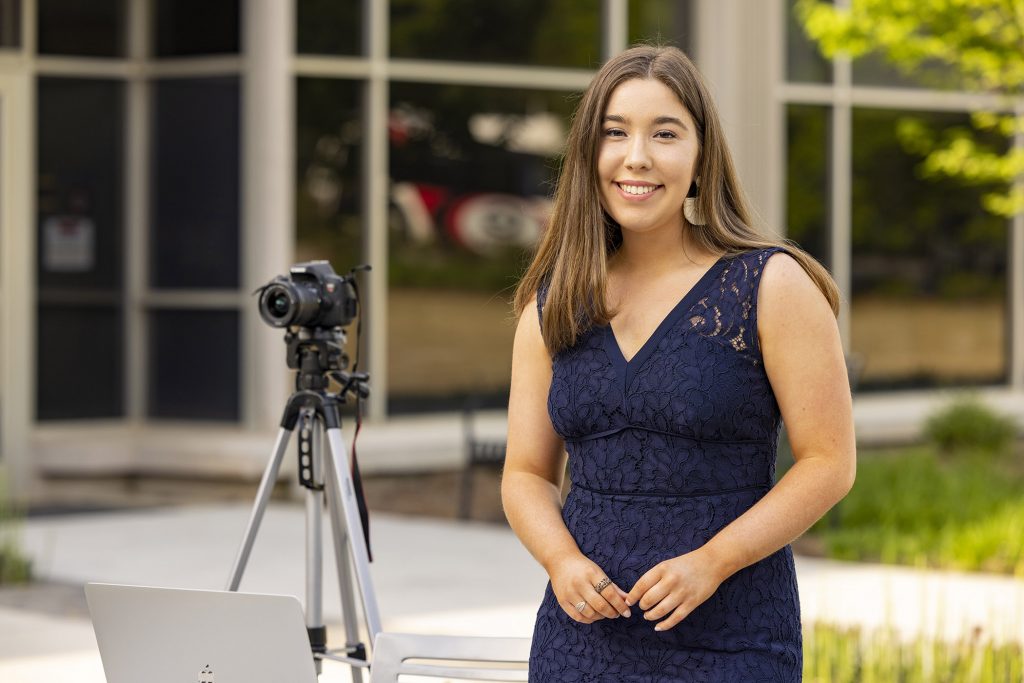 Kelly Krincek knew when she was applying to UGA that she wanted to major in entertainment and media studies. (Photo by Dorothy Kozlowski/UGA)

What jobs or internships have you done? What have you learned?
Currently, I work as the student media coordinator at the Office of the Dean of Students. In the past, I have interned at the National Institute of Corrections as a part-time creative/research intern, where I worked with the executive producer of Live Webinars to prep for multiple 1,000-person webinars. I have also interned at Jaclo, a company that specializes in designer plumbing fixtures, where my role was conducting social listening and website maintenance. In high school, I interned at HTTV, a local TV station and production studio. There, I helped with recording shows and live award shows. Through these experiences, I have learned so much about the creative process, specifically involving preproduction and postproduction. Further, I have learned how to manage my time properly, effectively approach problems/troubleshoot and spearhead projects on my own.

What is your passion and how are you committed to pursuing it?
My passion has always been telling meaningful stories. To me, stories are the ultimate way to connect with others, shift perspectives and make an impact. I have been lucky to work on projects in the past that have allowed me to share other people’s stories. Currently my job as student media coordinator lets me do this daily. In the future, I hope to continue on this path by having a career dedicated to creating and sharing stories.

After graduation, I plan to:
Get a job in New York City, California or Atlanta in creative development or editing.