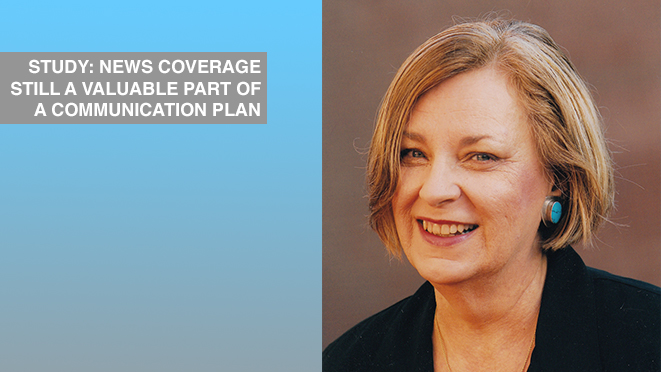 In an age where digital media is constantly changing, public relations practitioners and business professionals still see the benefits of traditional media coverage, according to a recent study in Public Relations Journal conducted by researchers at the University of Georgia.

The study finds those who use news sources to convey certain information about their products prefer independent media coverage.

“We have this intuitive idea that getting our messages covered by the news media makes those messages more credible than when we put them out there ourselves,” said study co-author Lynne Sallot, a professor of public relations in the Grady College of Journalism and Mass Communication. “Everyone believes this, but it's been difficult to prove it.”

Independent media coverage is a more traditional form of news content like a TV broadcast, newspaper article or radio show, whereas more controlled sources of media are paid media such as advertisements or an organization's own website.

“When asked directly, public relations practitioners and businesspeople in this study said they see independent media coverage as more credible than controlled, or paid, media,” said Pauline Howes, an associate professor of communications at Kennesaw State University who conducted the research while a doctoral student at UGA.

“This seems to support the value of news coverage as part of a communications plan.”

The research conducted by Howes and Sallot looked at the potential value behind using traditional news media versus controlled media as a practice in business.

“Both types of communication are used by businesspeople, but an independent source may be viewed by audiences as having more credibility because it is not controlled or influenced by the subject of a story,” Howes said. When determining what goes into a business's story, the editors and producers behind these independent news sources have no vested interest in the company or its products.

Differing from past experimental studies, this research looked at real world perceptions by interviewing public relation practitioners as well as business professionals.

Sallot explained further, saying that “there is some truth that to some audiences, messages covered by the media are more important. Until now, most of the research has suggested that that's not true.”

Because of the conducted interviews, Howes and Sallot were able to get more personal feedback from those in the field.

This study, which preceded a larger experiment by the co-investigators, supported the belief that “our corporate or our public relations messages that are carried by news media do have enhanced news credibility,” Sallot said. “There is still more research to be done. But we have to be sure that our messages are not too slanted because they will appear to be biased and that will not be effective and will not help us succeed.”

The study is available online at http://www.prsa.org/Intelligence/PRJournal/Documents/2014HowesSallot.pdf.