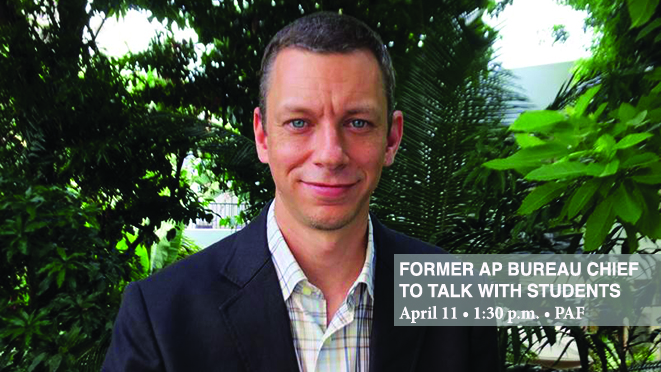 Todd Pitman, a 1993 political science graduate of UGA and former Associated Press bureau chief in Bangkok, will deliver a talk April 11, 2016, at 1:30 p.m. in the Peyton Anderson Forum at Grady College.

Pitman, a fellow of Harvard’s Nieman Foundation for Journalism, will share his experiences and expertise.

After graduating from UGA, Pitman moved to Africa and began his journalism career covering Burundi’s civil war. He joined The Associated Press in 2001 as a correspondent in West Africa, where he later served as bureau chief. He also covered wars in Afghanistan, Iraq and Lebanon. During his time in Asia, he reported on stories ranging from the 2011 Japanese tsunami to last year’s earthquake in Nepal and the recent military coup in Thailand.

A few of the stories he has written include:

Iraq: Through the looking glass

Philippines: Resilience after the disaster

During his career, Pitman has won the Associated Press Managing Editors Award for feature writing and was named journalist of the year by the Society of Professional Publishers in Asia in 2014.