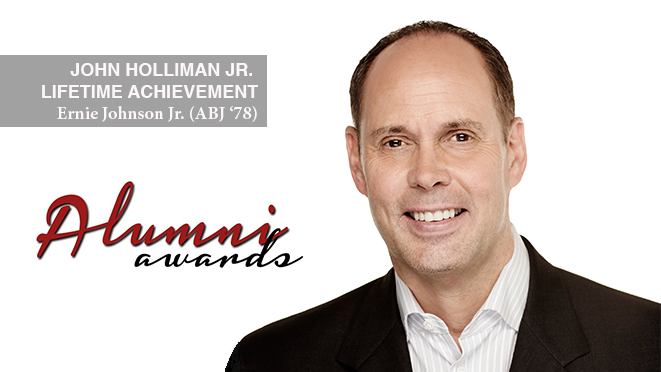 Ernie Johnson Jr., longtime host of TNT's “Inside the NBA,” is the 2016 recipient of the John Holliman Jr. Lifetime Achievement Award, presented by Grady College. Named after the late John Holliman, Grady alumnus and former CNN reporter, the award honors sustained contributions to the profession throughout a career.

A 2015 profile on ESPN’s “E:60” offered a rare glimpse into Johnson’s personal life and explored how it has shaped him professionally.

“If there’s one thing I take exceptional pride in in my job, it’s that nobody’s going to out work me or be more prepared than I am for a show,” Johnson says in the special.  “It’s something I’ll always value with my father.  He was proud of hard work, proud that things paid off.”

Johnson has received numerous awards for his work, including three sports Emmys for Best Studio Host. He is active in the Muscular Dystrophy Association. In 2007, he was the first recipient of Athletes in Action's John Wooden Keys to Life Award, which honors people for such qualities as faith, integrity and character.

Johnson will be recognized alongside fellow Alumni Award recipients Michael Abramowitz, Eric Haley and Maria Taylor at “Grady Salutes: A Celebration of Achievement, Commitment and Leadership” on May 6 at 6 p.m. at the UGA Conference Center and Hotel.  At that time, he will also be inducted into the Grady Fellowship, which honors friends of the college whose accomplishments, friendship and service to the industries they serve have made a positive impact on Grady College.