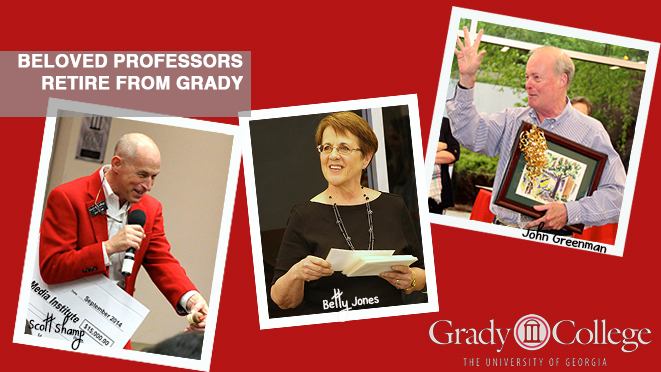 This coming fall when classes resume at Grady College, our halls will be a little more empty as we wish good luck to three beloved faculty members — John Greenman, Betty Jones and Scott Shamp — as they retire.

These members of our Grady family not only taught our students inside the classroom through traditional coursework, but they extended opportunities for our students through learning experiences that, in many cases, transformed their future professional careers and personal lives.

“Retirements like these always leave us a bit sad, but rarely have three faculty members left such massive shoes to fill,” said Charles Davis, dean of Grady College. “The dedication to Grady students displayed by this trio of talented, passionate faculty members set a standard for us moving forward, and leave us a much stronger college thanks to their countless contributions to teaching and scholarship.”

It is due to their leadership, dedication and passion that some of Grady’s most vibrant programs have thrived: the McGill Medal for Journalistic Courage, PRSSA, the New Media Institute, Travel Writing Study Abroad, the Washington D.C. agency tour, and TEDxUGA all have these three to thank.

We salute these retiring faculty members:

When John Greenman came to Grady College eleven years ago, he left behind a high-profile career as president and publisher of the Ledger-Enquirer in Columbus, Georgia. Greenman joined Grady College as the first Carolyn McKenzie and Don E. Carter Professor of Journalism, teaching public affairs journalism and creating courses in entrepreneurial journalism, news media credibility and public trust.

Greenman has translated his outreach interests in ways that positively impact students.  His interest in improving the journalistic coverage of poverty is displayed in the Covering Poverty website that he developed to help journalists.

“In short, Professor Greenman played a role in almost every opportunity I had as both an undergraduate and graduate student,” said Carolyn Crist (ABJ ’10, MA ’14), a freelance writer. “When I was freshman, I selected him as my honors mentor, and he immediately showed interest in my goals during our first meeting. I began doing research with Professor Greenman and Diane Murray on the Covering Poverty project, which turned into an Honors Program summer fellowship and ultimately my senior research thesis. I also now produce the weekly Covering Poverty newsletter, and we wrote a grant to secure outside funding from the Annie E. Casey Foundation to keep it going beyond his retirement.”

One of Grady’s hallmark programs of excellence, the McGill Lecture, which started in 1979, has blossomed under his co-leadership.  After taking over the program, Greenman grew the lecture series to include a symposium in 2004 that provided a forum for invited students at Grady to meet one-on-one with journalists who take risks in the name of good journalism.  In 2007, the program awarded its first McGill Medal to a U.S. journalist whose career has exemplified journalistic courage.

“John is a gifted teacher and leader in our department,” commented Janice Hume, head of the Journalism Department. “He took what was just a McGill Lecture series and transformed it into an entire portfolio of events that advanced something we find important: that is journalism and courage.”

Finally, Greenman recognized the need to add a summer study abroad program that didn’t require a large budget to participate. He created the Travel Writing program, which  was first held in Cambodia and most recently in Prague.

“I think it's hugely important to recognize the diversity of student experiences in Grady and offer an affordable program for students who want to go abroad — for the first time, for some,” Crist said.

“His professional experience in the newsroom and practical teaching style made him one of the most interesting, effective professors in the journalism department,” Crist concluded.

“I owe a great debt of gratitude to Tom Russell and Dean Krugman for taking a chance on me 18 years ago,” Betty Jones said of the time she was hired to teach graphics.

Looking back, we think then dean, Tom Russell and Dean Krugman, a Grady professor, knew what they were doing.

Jones has taught graphics courses at Grady since 1998 and became the PRSSA advisor in 2003. During the course of her work, she has been recognized as Outstanding AdPR Department Teacher three times, was inducted into the Teaching Academy in 2009 and was a Darwin Davis winner in 2013.

“Betty is a very gifted and passionate educator and mentor and certainly an advocate for our program,” said Tom Reichert, AdPR Department head. “PRSSA has blossomed under her mentorship and it is the largest club of its kind on the planet. And, AdPR Connection is bigger and better every year,” Reichert added about the career fair that pairs Grady students with prospective employers.

In addition to her legacy advising the UGA PRSSA chapter, Jones recognized a need to cultivate job opportunities for Grady students in Washington D.C. Eight years ago she coordinated the first Washington D.C. agency tour and she has taken a group there ever since. In 2015, she is co-directing the first Grady@DC program.

“There are a lot of students who have jobs and internships due to Betty,” Reichert added.

“Without Dr. Jones’s diligence, leadership and passion, I would not be who I am today,” said Michael Gray (ABJ ’11), a communications and social media coordinator at FOX Sports South.  Gray was not only a student, but also served as PRSSA president, working closely with Jones.

“Dr. Jones was the backbone of my experience at Grady. She was a comfort in times of frustration. She was a cheerleader in times of stress. And she was a motivator in times when opportunity came knocking. Without Dr. Jones, I may never have run for PRSSA president or realized my full potential as a leader. To say Dr. Jones was an asset to Grady College is an understatement — she is the epitome of what Grady stands for.”

Perhaps Jones’s greatest legacy is that she leads by example, directing her life as she teaches her students to lead theirs.

“I tell all my PRSSA students to turn around and take the hand of the person coming behind you, because much was given to you, so you need to give back.”

That is just what Jones has done countless times.

It’s hard to think of either the New Media Institute or Scott Shamp without thinking of the other.

The two have been entwined since Shamp started the Institute 15 years ago, and after nearly 30 years as an employee of the University of Georgia, Shamp has retired to start a new adventure.  He assumed an associate dean position at Florida State University’s College of Fine Arts in July.

Shamp, who was a Jim Kennedy New Media Professor and director of the NMI, was not only a faculty member, but an alumnus of Grady having earned his undergraduate and master’s degrees from Grady (his Ph.D. came from the University of Utah).

“The University of Georgia was my dream job,” said Shamp in an interview with Patrick Adcock of the Red & Black in May 2015. “There are those opportunities to do things that no other university was doing. My philosophy fit well with that, but there are a lot of people who have made the NMI possible. It was truly a collaborative and interdisciplinary effort, and it still is.”

In addition to the NMI, Shamp is synonymous with TEDxUGA, serving as the driving force and the master of ceremonies of the event that prides itself on showcasing ideas worth sharing.

A number of students have been energized by Shamp’s engaging programs from countless NMI SLAM sessions to getting them ready for the tech world by connecting with them with other alumni.

“There is no better representation of a ‘people person’ than Dr. Shamp,” commented Lizzie Azzolino (ABJ ’09), an NMI graduate and current senior brand & innovation strategist at fuseproject in San Fancisco. “He has incredible energy and passion for not only new media, but also connecting people.

“In his classes he was half entertainer, half teacher, and that made every lecture interesting. Dr. Shamp tried his best to replicate a “real world” experience for us in NMI across the board, specifically with the capstone projects and the partners he brought in as ‘clients.’ Looking back on it now, I had no idea how directly the capstone experience would apply to what I do now.”

We hope the students at FSU appreciate Shamp’s signature “bam baby” as much as our NMI students did.