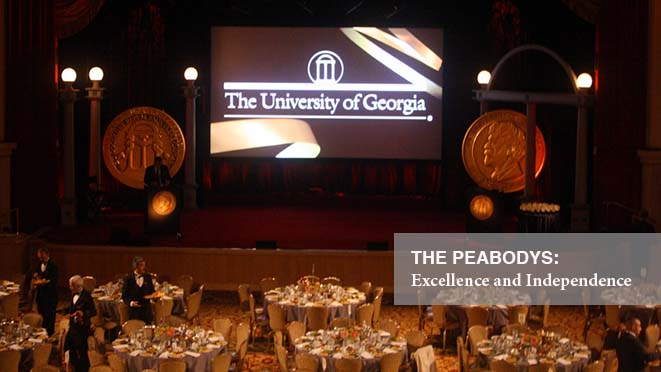 This article originally was published in the special Grady College Centennial insert appearing in the April 12 edition of the Athens Banner-Herald.  It is reprinted here with permission.

No prize for electronic media in the world is more coveted or respected than the George Foster Peabody Award, but it wouldn’t matter half as much if not for the independence it enjoys thanks to its association with the University of Georgia’s Grady College of Journalism and Mass Communications.

In 1938, the National Association of Broadcasters was looking to generate more respect for its member radio stations — and, frankly, more publicity — when its executive leadership asked Lambdin Kay, general manager of Atlanta’s WSB-AM, to dream up a prize for radio that might have the cache that the Pulitzer had in the print world.

If what Kay came up with had been strictly an industry trophy, an exercise in self-congratulation, the Peabody might be only a bit more prestigious today than a Golden Globe. But WSB’s continuity editor, Lessie Smithgall, a University of Georgia graduate who recently celebrated her 104th birthday, introduced Kay to her mentor, John Drewry, the esteemed dean of UGA’s Grady School.

Once they had outlined the award and obtained the use of Georgia-born philanthropist George Foster Peabody’s name and likeness from his family, Kay and the NAB left the program to Drewry to operate.

Drewry recruited achievers like publisher Alfred A. Knopf and U.S. Commissioner of Education Secretary John W. Studebaker for the first board of judges. At the first ceremony, a 1941 soiree in New York focused on 1940s radio fare, the board bestowed awards on stations in Cleveland, Cincinnati and Columbia, Missouri, for public service, and CBS Radio’s Elmer Davis was honored for his intrepid reporting.

The first Peabodys acknowledging the new-fangled gizmo television came in 1948, when awards went to ABC’s “Actor’s Studio”, an early experiment in live drama that involved the likes of John Steinbeck and Elia Kazan, and an NBC children’s program called “Howdy Doody.” We begin to see that omnivorous purview that is still a Peabody hallmark.

Peabodys officially became an international award in 1953 with the selection “Coverage of the Coronation of Queen Elizabeth II,” the first broadcast by the BBC that reached more television viewers than radio listeners around the world. Cable programming was first honored in 1981 (HBO’s “She’s Nobody’s Baby: The History of American Women in the 20th Century”), a website for the first time in 2003 (Transom.org).

At the 74th Peabody ceremony coming up this Sunday night (May 31) at Cipriani Wall Street in New York, the 40 honorees range from the historical, hospital drama “The Knick” to VICE News’ inside look at ISIS, from the documentary “Mr. Dynamite: The Rise of James Brown” to the animated children’s series “Doc McStuffins.”

The evolution of the Peabody Awards is ongoing, evidenced not only by the program’s embrace of new media and new platforms but also in its openness to fresh thinking about what constitutes excellence and a story that matters. In its early years, the boards of judges overwhelmingly honored news, information programming and public service campaigns. Awards even to entertainment considered highbrow, such as original drama and classical music, were fairly rare.

That began to change in the 1970s, when what we now know as “popular culture” underwent a scholarly reassessment and series such as “M*A*S*H” and “All in the Family” suggested new possibilities for intelligence and real-world relevance in established entertainment formats. By the turn of the 21st Century, it was common practice for Peabody boards to honor a gritty crime series such as “The Wire” or a cheeky satire such as “South Park” along with war reporting from deep inside Syria and an innovative production of “Macbeth.”

As the Peabody Awards heads toward its 75th anniversary in the spring of 2016, the program occupies most of the third floor of Grady College, providing not only offices for a staff of 10 but also suites for board meetings and video production.

The award is attaining a visibility it hasn’t enjoyed since its earliest years, if not greater. Under Jeffrey P. Jones, a media scholar who in 2013 became the Peabodys’ fifth director, some of the 74th winners were announced on national television, the cable network Pivot is making the May 31 ceremony the centerpiece of a June 21 prime-time special, and a first ever Peabody Advisory Board has been recruited.

Comprised of 25 top executives in news and entertainment, the Advisory Board has been charged with boosting awareness of the award, here and abroad, and helping build a Peabody endowment that will be used to preserve and make more accessible to the scholars and the general public the Peabody Awards Collection.

Saving and preserving Peabody submissions was another masterstroke of foresight by Drewry. Every program creator who enters the competition has to agree to let the submission become part of the archive and allow it to be screened on campus for educational purposes and studied by visiting scholars. That’s how UGA has come to have the nation’s third largest archive of radio, TV and web programming. The more than 90,000 items — 16 mm films, kinescopes, tapes, cassettes, DVDs and hard drives — are housed in a cavernous, climate-controlled vault underneath the Richard Russell Special Collections Library at 300 Hull Street, Athens.

More than ever, the Peabody Awards program is reaching out to the world. But it’s also, more than ever, a local treasure, with a delightful museum space in the Russell library that includes everything from vintage radio microphones to “Simpsons” memorabilia to interactive digital kiosks for watching clips of Peabody-winning programs. It’s free, it’s open to the public, and the welcome mat is out.