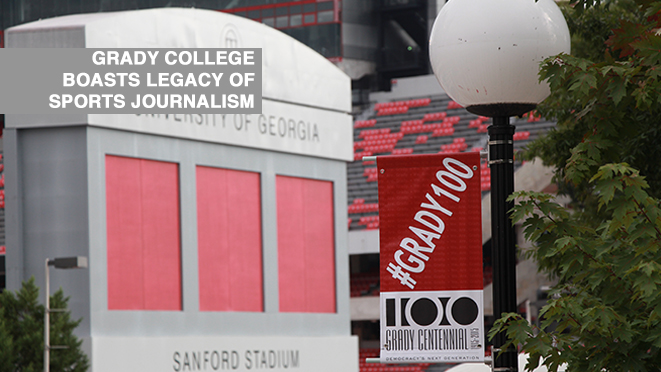 (The following was written by Dean Charles Davis for the Oct. 4, 2014, UGA football game program. It is reprinted here with permission from the UGA Athletic Association.)

The Henry W. Grady College of Journalism and Mass Communication marks its Centennial this academic year, offering a wonderful vantage point to look back on the rich shared history of sports and journalism at UGA. UGA athletics and Grady College share so much history it's not surprising the two are neighbors at the heart of America's first state-chartered university.

Grady College's ties to UGA athletics stretch back nearly as far as the university itself. Grady's founder, after all, was an English professor named Steadman Sanford — yes, that Sanford, of Sanford Stadium fame. It was Sanford who proposed the creation of a college in 1915.

Grady College got its name in 1921 upon the suggestion of another instantly recognizable name in UGA history: Dan Magill, Sr., father of the legendary Dan Magill, Jr., beloved late Georgia tennis coach, Bulldog Club founder and sports information director. Magill Sr. was editor of the Hartwell Sun in the early 1900s when much of the Southland was still mourning the loss of Henry W. Grady, chief journalist and publicist for the New South and managing editor of the Atlanta Constitution in the Reconstruction Era 1880s.

When Sanford successfully charted its name change, Grady College became the preeminent college of its kind in the South, a position it holds today.

From its infancy, Grady College has honored its namesake, graduating leaders who brought glory to the program and to the university. The names are legendary, from Knight-Ridder vice president Don Carter to CNN and Los Angeles Times president Tom Johnson and his classmate Charlayne Hunter-Gault, who in 1961 integrated the University of Georgia. The iconic Earl Leonard gave rise to modern public affairs as head of communications at Coca-Cola, and his Grady protégés such as Scott Williamson continue to exert influence at one of the world's leading brands. Deborah Norville, Deborah Roberts and Amy Robach also have all brought fame to Grady on television, while Julie Moran served as the first female anchor of ABC's Wide World of Sports. The crown jewel of the college — the Peabody Awards — captures the attention of the world each spring at a star-studded New York ceremony that places Grady and the University of Georgia front and center among the nation's media and entertainment titans.

Grady's sports lineage traces back to the meteoric career of Edwin Pope, whose 50-plus years at the Miami Herald led to induction in the College and Pro Football Halls of Fame. Pope served as sports editor at the Athens Banner-Herald at the tender age of 15, a record for youthful leadership certain never to be broken.

The great Lewis Grizzard gave Pope a run for his money, becoming sports editor of the Atlanta Journal at age 23. Grizzard gave Georgia fans some of the finest writing about football in existence. I can recite his column following Georgia's epic 26-23 win over Clemson in 1984 by heart, culminating in this description of the moments following Kevin Butler's 60-yard field goal:

Grizzard truly was one of a kind, but there have been so many others. Today, college football's leading writers include “Mr. College Football,” Tony Barnhart, Tommy Tomlinson, ESPN's Mark Schlabach and Radi Nabulsi of UGASports.com. Michael Giarrusso runs the sprawling Associated Press sports operation as global sports editor. On the radio, Chip Caray, the voice of the Atlanta Braves, follows in the footsteps of his inimitable father Skip and his legendary grandfather Harry. Atlanta sports fans grew up watching Bill Hartman, Jr., and UGA would not be the same without the love and service to athletics of Swann Seiler and her parents Sonny and the late Cecelia Seiler. And Grady is proud that alum Gordon Smith, the executive director of the United State Tennis Association, is leading the effort with a committed Magill committee to fund a professorship in sports communication at Grady that will carry forever the name of the late Coach Daniel Hamilton Magill, Jr. “the greatest and grandest Bulldog of them all.”

In 2011, Grady marshaled its assets in sports with a remarkable commitment from the Carmical Foundation to create the John Huland Carmical Distinguished Professorship and eventual chair in Sports Journalism and Society at Grady. Steered by the interest in strong writing by alum Jimmy Alston and the Carmical Foundation board, and championed by the late Professor Conrad Fink, the gift brought us Professor Vicki Michaelis, a veteran sports reporter, who joined the college in 2012 and set to work on a sports journalism certificate program launched this year.

Michaelis was the lead Olympics reporter for USA Today through six Olympic Games, and also covered professional and college sports for the Denver Post and the Palm Beach (Fla.) Post. She is the past president and chair of the Association for Women in Sports Media.

The six-course certificate program trains students in reporting, writing, social media, video, broadcast and sports communications. It introduces them to sports' role in reflecting and driving change in society and to topics such as performance-enhancing issues, stadium financing and sports analytics.

The program, already in high demand with our students, uses Athens' vibrant sports landscape as a learning laboratory. The focus is on real-world experience, whether students are broadcasting Clarke Central High School games or reporting on UGA's sports teams.

The sports media industry already is taking notice. Students in the program have secured internships at organizations such as ESPN, The Atlanta Journal-Constitution, the U.S. Olympic Committee, Augusta National Golf Club, Sports Illustrated, the NBA and MLB.com.

We occasionally make headlines, too: today you'll no doubt see Grady's latest gridiron great, Chris Conley, #31 in your program but first in our hearts.

As a local kid who played Athens YMCA football on the Sanford turf, I've spent my life either Between the Hedges or missing them like crazy. I grew up hearing Munson ask “Whatcha got Loran?” and today I have the privilege of commending the columns of Loran Smith as models of great sports writing and of having his counsel as a friend. As we celebrate 100 years of Grady College and look to the next century, it's reassuring to know that the love affair between the college and UGA athletics abides.