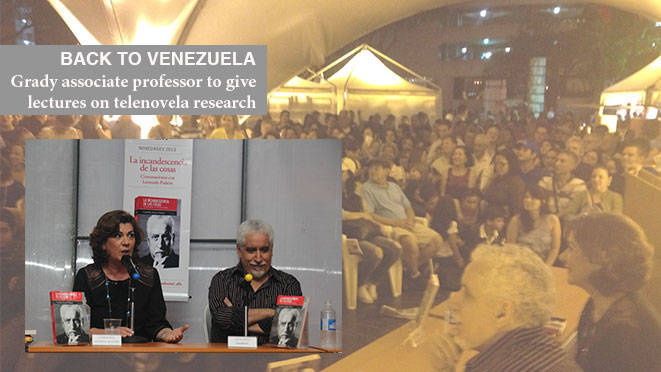 Carolina Acosta-Alzuru, an associate professor of public relations at the University of Georgia’s Grady College, will travel to her native Venezuela this spring to present talks about her scholarship foci: telenovelas, culture and society.

“The telenovela genre has hooks and an addictive soul,” Acosta-Alzuru said. “Nobody is completely immune to it.”

For fifteen years, Acosta-Alzuru has been researching telenovelas—television programs that are often compared to American soap operas but differ in many ways.

For one, telenovelas have deep cultural ties.  They have an ending; each series concludes in about 120 hours. They also attract a worldwide following of both male and female viewers.  And unlike soap operas, which often fill daytime programming slots, telenovelas are usually broadcast in prime time in Latin American countries.

“Because I’m a cultural studies scholar, I use the telenovela as an epicenter to study the links between media, culture and society,” Acosta-Alzuru explained.

In a program coordinated by the United States Embassy in Caracas, Venezuela, Acosta-Alzuru will be welcomed as a guest lecturer at universities in four major cities throughout the country in March.

Discussion topics will include the making of telenovelas, the presence of the Cinderella story and other themes, why the Venezuelan telenovela has dwindled in the international market, and the inclusion of societal messages, such as health promotion, in telenovela scripts.

It will be the third trip to Venezuela for Acosta-Alzuru since the April release of her book, “La incandescencia de las cosas: Conversaciones con Leonardo Padrón” (Alfa, 2013).  Written in Spanish, the book reads as an analytical conversation with Leonardo Padrón, an award-winning telenovela writer and poet whom Acosta-Alzuru describes as “a significant intellectual voice in Venezuela.”

Editorial Alfa approached Acosta-Alzuru with the idea, and she completed the book thanks to a Grady fellowship.

“I do have my microscope on Padrón, but really I try to keep track of the telenovela genre as a whole,” she said.

To coincide with her research, Acosta-Alzuru created the course Telenovelas, Culture and Society, which is cross-listed with Latin American studies. The class is popular with students and frequently features prominent telenovela actors, directors and writers with whom Acosta-Alzuru has connected over the years.

“For me, my telenovela class is a gift,” she said. “Some people don’t realize that when you teach a class in the area that you study, it advances your research. Students make you think in different ways.”

Her passion for teaching has led to Acosta-Alzuru being named one of three national finalists for the 2013 Scripps Howard Foundation Journalism & Mass Communication Teacher of the Year Award. It is one of the most prestigious honors in journalism education.

“I want my students to realize that the best source of motivation is within them,” she said of her teaching philosophy.  “So I strive to show my own enthusiasm for the class topic, and that I have high expectations of my students and of myself. Therefore, I always prepare for class.”

Final results will be announced in March and the winner will be recognized during the 2014 Association for Education in Journalism and Mass Communication Conference in Montreal, Canada, this summer.

Acosta-Alzuru, who earned both her M.A. and Ph.D. in mass communication at Grady College, said she’s grateful for the support of her colleagues and thankful to represent UGA in the competition.

“I can’t think of a better place to work,” she remarked.  “I’ve always loved coming here every day. I loved it as a student and I truly love it as a professor.”