There was laughter and tears, but mostly a sense of gratitude for the opportunity to come together for an in-person Grady Salutes celebration April 29, 2022.

The event attracted nearly 125 Grady College alumni and friends to the Athens Cotton Press for the annual recognition of Alumni Award recipients and Fellowship inductees.

Wolfe was not able to attend the ceremony, but sent a video greeting noting her appreciation for the award and reflecting on lessons that David Hazinski, emeritus professor, taught her.

“Journalism is a relentless pursuit of facts, a commitment to always do the next right thing and an unwavering belief in the ethical principles of journalism,” Wolfe said in her video acceptance.

As the recipient of the Lifetime Achievement Award, Acosta-Alzuru was also inducted into the Grady Fellowship.

During the Fellowship acceptances, Goodenow reflected on how sports is more than a final score and talked about an experience a few weeks where the Chicago Bulls was able to offer Justin Hardy, a 22-year-old basketball player with cancer, an opportunity to attend a playoff game. Hardy claimed the day was one of the best of his life, and Goodenow reflected on how moments like that reminds her and all involved with sports what a privileged spot they hold.

“I want to thank Georgia and I want to thank Grady for putting me on a path that allowed me to have amazing experiences and meet incredible people, like Justin and his family,” Goodenow said.

Perhaps the most moving acceptance of the night was by Stevie Joe Massengale, Alan’s teenage daughter who was accompanied by his wife, Elizabeth. Alan died of cancer on March 12, after learning he would be inducted into the Fellowship, and his daughter commented about how excited he was about the honor.

“He inspired many and of course, he inspired me,” she said.  “Your legacy lives on because you are larger than life.”

The Rollin “Pete” McCommons Award for Distinguished Community Journalism was presented to Larry Hobbs, a reporter for The Brunswick News. The award, recognizing work in 2020, was presented to Hobbs for his dedicated reporting about the murder of Ahmaud Arbery, starting the day after his murder, and continuing throughout the trial.

“Truth more often thrives in communities where newspapers abide,” Hobbs said as he accepted the award. “Those in positions of public trust are held accountable when newspapers simply do their jobs. When an ugly truth hid behind the senseless killing of Ahmaud Arbery, The Brunswick News did its job. We covered this sad story relentlessly from the day it occurred right up until justice was served in both state and federal courts. We owed that to our community, and to Ahmaud and to his family.”

Nominations for next year’s class of Alumni Awards recipients are now accepted and can be submitted on the Alumni Awards nomination form. 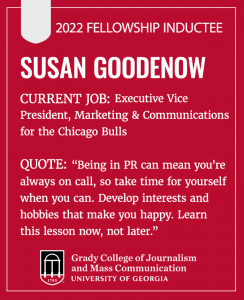 Goodenow is executive vice president of marketing & communications for the Chicago Bulls, where she is responsible for developing and managing the team’s marketing efforts, directing and integrating all team content and communication and overseeing the team’s community engagement efforts.

Goodenow graduated from the University of Georgia with a degree in public relations (ABJ ’90) and continued her education at Georgetown University with a master’s degree in American studies. She also earned an Executive Scholar Certificate in General Management from the Kellogg Executive Education program at Northwestern University.

Before joining the Bulls in 2012, Goodenow spent four years with the Boston Red Sox as the senior vice president of public affairs and marketing.  She has also worked for Major League Baseball/Office of the Commissioner, the American Red Cross and public affairs firms in Washington, D.C.

Goodenow continues to serve UGA as a member of the AdPR Executive Committee and the Alumni Sports Industry Council. A resident of Chicago, Goodenow is also a member of the Gilda’s Club Chicago Governing Board, American Red Cross of Greater Chicago Tiffany Circle and the Economic Club of Chicago.

Following are excerpts from an interview with Goodenow:

Grady College: What is it about your field that appeals the most to you?  Why did you decide to enter that field?

Susan Goodenow: My choice to enter PR was made, in part, after contemplating a role in broadcasting as a sports reporter. Soon after I started down that path, I realized being in front of a camera is not for me – I break out in hives and cold sweats! – so I decided a role behind the camera was a much better fit. I have always loved words, and it oddly brings me joy when someone lands on the perfect word choice or sentence structure. Growing up I was also intrigued by marketing – more specifically advertising – along with business news and current events, so the combination of those interests with my love of words and my aversion to being in front of the camera made PR a good fit.

GC:  What do you miss the most about being at UGA?

GC:  What does this recognition mean to you?

SG: I am a very proud Georgia Bulldog – just ask anyone who knows me, particularly during football season. I’ve been going to games since I was four years old. My sister and I both graduated from Georgia, as did my brother-in-law. My niece is a junior, and my nephew will be a freshman in the fall.  It is an incredible honor to be recognized by an institution that is so much a part of my family and helped shape who I am.

GC:  What are your best strategies for keeping up to date with industry advancements?

SG: The world evolves and changes, so it is important to stay current and adapt. While you may be an expert in something right now, some of your go-to knowledge and skills could someday become funny “do you remember when we did that?” topics, so always stay curious and never stop learning. PR is a profession where you provide strategy and counsel to people and organizations spanning industries and interests that can be affected by a number of internal and external factors. Staying up to date on current events and emerging trends prepares you to be ready in a crisis or when an opportunity to create value comes up. It’s easy to scroll through social and feel like you know what’s going on, but that’s just a surface look. Go beyond the “what” and find ways to dig deeper to learn the “why” and “how” by reading articles and books, listening to podcasts and seeking out interesting people and have conversations with them.

SG: Being in PR can mean you’re always on call, so take time for yourself when you can. Develop interests and hobbies that make you happy. Learn this lesson now, not later. It is something I only recently started to practice and am still not very good at it.  I even bought a sign that reads “Don’t forget to go outside and play” that hangs in my house to serve as a constant reminder.

All our honorees and inductees will be honored at Grady Salutes: Celebrating Achievement, Leadership and Commitment on April 29, 2022 at Athens Cotton Press.

Grady College proudly announces the newest class of Grady Fellows, a recognition honoring friends of the college whose accomplishments, friendship and service to the industries they serve have made a positive impact on the college and its students.

“This year’s class of Grady Fellows represents the full breadth and depth of the college,” said Charles N. Davis, dean of Grady College. “From senior leaders in business to broadcast icons and radio legends, it’s a true testament to the quality of the nominations for this, our highest recognition.”

The 2022 recipient of the John Holliman Lifetime Achievement Alumni Award, which will be named later this month, will be inducted into the Fellowship as well.

In a nod to the 2021 National Football Champions, Uga X (Que) is an honorary member of the 2022 class. Que began his reign as the Georgia Bulldogs in 2015, the College’s Centennial year.

The Fellowship induction, along with the recognition of the 2022 Alumni Awards, will take place Friday, April 29 at Grady Salutes: A Celebration of Achievement, Commitment and Leadership.

Register here for the for the Grady Salutes celebration on April 29, 2022. Sponsorship opportunities are also available.