Editor’s Note: The graphics display “Does this Make Sense,” featuring the artwork of April Greiman, is on display Nov. 5-26, 2021, in the Cube Gallery, Room N231, at the Lamar Dodd School of Art. This display is part of the UGA’s Spotlight on the Arts.

Chances are favorable that anyone who has studied the role computers have in graphic design has heard of April Greiman’s poster, “Does This Make Sense?”

Students in Kristen Smith’s Advanced Graphic Communication class this semester are not only trying to make sense of the 6-foot poster, but also educate others on campus about the history of the piece as part of the UGA Spotlight on the Arts celebration.

The students have studied the poster since the beginning of the semester and have curated and installed a display including a short video explanation in a gallery in the Lamar Dodd School of Art.

Smith, a senior lecturer with a keen interest in graphic history, has known about the poster for years and found an original edition on the shelves of the main library at UGA.

“This is a really historic piece and it just so happens it was on the shelves of the UGA library,” said Smith, who in addition to her teaching also serves on the UGA Arts Council. “I checked it out and then I told them, ‘you shouldn’t let people check this out.’”

The display features a poster created by Greiman in 1986, considered the first piece of completely digital print design and one of first examples showing the potential that computers have in graphic design. Grieman used an early Macintosh computer and the programs MacDraw, MacPaint and MacVision to create Design Quarterly issue #133. Instead of the typical 32-page publication, she created a 6-foot poster that folded to the dimensions of the journal. This pioneering example of digital design is reprinted in many graphic design textbooks but has to be reduced to the point that it’s unreadable.

Fortunately, the library agreed to let Smith borrow the original version of the poster which services as the centerpiece for the display. A short video was created by two students explaining the importance of the poster, and accompanying text and visuals provide context for the art.

Grieman is still a practicing artist through her design studio in LA called Made for Space.

Being able to translate messages, issues and grand challenges in a clear, educational manner is a vital skill for any graphic designer. In an effort to bring those lessons to life, students from Kim Landrum and Kristen Smith’s Advanced Graphics classes participated in a project “Our Plastic, Our Problem,” visually depicting the problem of plastic trash in the world’s waterways.

According to Smith, students were given the opportunity to “interpret this information any way they want…to educate an audience, persuade an audience, develop messaging or create public service announcements.” 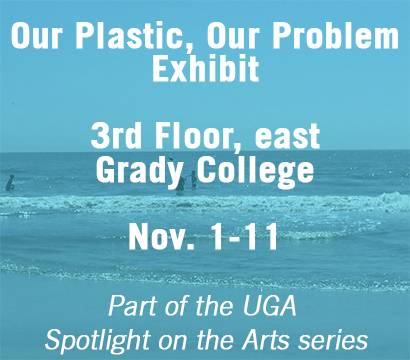 Students first studied the issues leading to plastics in the waterways and were inspired by actual trash that the Office of Sustainability cleaned out of local waterways. Once they decided on an area to focus on, they had their choice of delivering their messages via a poster, infographic, social media campaign, website, gif or three-dimensional art. Almost all the created work focused on the themes of reduce, reuse and recycle.

For graphics student Kellie Stofko, this project reinforced values she currently practices. She created series of posters about reducing consumption that encourage viewers to use metal or paper straws, reusable shopping bags and metal water bottles. “Instead of focusing on recycling, we need to focus on reducing our consumption,” Sofko explained about her messaging. “I think this is something we need to focus on. The problem is so bad.”

The project was inspired by research by Jenna Jambeck, of the College of Engineering, who recently estimated that eight million metric tons of plastic enter the oceans each year.

The project is part of the University of Georgia Spotlight on the Arts celebration, Nov. 1-11, 2018.

A video about the Our Plastic, Our Problem exhibit can be viewed here: