With the Dec. 6 Senate runoff election in Georgia soon approaching, the Grady Research Radio podcast brought back Dr. David Clementson, an assistant professor in Public Relations at Grady College and a political communication researcher, to discuss the communication strategies of Sen. Raphael Warnock and his Republican challenger Herschel Walker heading into the election.

Below is a transcription of the episode, edited lightly for clarity and brevity.

Grady Research Radio: So what does a runoff mean for both of these candidates, Herschel Walker and Raphael Warnock? Are either of them feeling particularly happy about it?

David Clementson: I bet neither of them is feeling particularly happy about having to do it all for another month, with the more fundraising and the more attack ads, interviews and invitations to debate. Either one of them would have rather won on Election Day.

You could go any number of ways speculating about Herschel. On the one hand, the libertarian was also on the ballot for the general election, and he probably siphoned off some of Herschel’s support that could have potentially put him over the majority margin.

And there’s all kinds of speculation, as now we see that, regardless of who wins this Georgia seat, the Democrats will retain the majority in the U.S. Senate. That could depress turnout among Republicans who would have been motivated to get Herschel that majority for the Republicans in the Senate.

Or it could benefit Herschel if, let’s say, people had some trepidation about his lack of political experience and were hesitant about wanting him to be a U.S. Senator. Maybe now it’s not as big a deal, if he’s going to be in the minority in the U.S. Senate anyway.

So, yeah, it’s another another month of election torture for everybody.

Grady Research Radio: In just about every one of Warnock’s comms efforts, from his ads to his public addresses and speeches, he continues to question Herschel Walker’s credibility. I know that you’ve done a lot of studies about factors that impede or bolster a politician’s credibility. So where does Walker currently stand in terms of his perceived credibility, and does that even really matter? 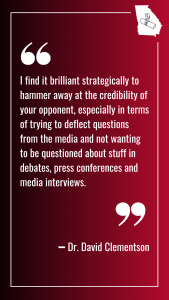 David Clementson: Yeah, Warnock has been hammering away, laser-focused on lack of credibility of his opponent, which is pretty typical for politicians to try to pull on each other in campaigns. But Warnock has been really good about staying disciplined and on message, chipping away at the perceived trustworthiness of Herschel Walker.

He’s run ads specifically attacking Herschel for not answering reporters’ questions, running away from reporters, which is, as you said, my key focus in my research. I find this just brilliant strategically to hammer away at the credibility of your opponent, especially in terms of trying to deflect questions from the media and not wanting to be questioned about stuff in debates, press conferences and media interviews.

Herschel seems kind of scattershot with his messaging. A lot of elements are to his benefit as the challenger. He hasn’t been part of the system in which you’ve got inflation, crime, recession and an unpopular Democratic president in the White House. All these factors are just huge to be benefiting the challenger Republican. Yet, we don’t see as much discipline from Herschel in determining the exact issues to hone in on.

Now, in their debate, as in a lot of debates, you go back and forth with politicians calling each other liars. Really, any given day in the news as they’re attacking each other, they’re accusing each other of being liars, and that is the kind of research that I do — looking at the effects of politicians having their veracity impugned.

I know, from experiments that I’ve run, that if a journalist accuses a politician of being deceptively evasive, voters believe the journalist, and it doesn’t matter if the journalist’s allegation is accurate or not. People will still believe the journalist. And this is surprising, of course, when you’ve got surveys, polls out there saying that the public doesn’t trust the media.

But when we move away from self-reported polls and surveys to experiments, where people aren’t being prompted to be suspicious of the media, we see that people tend to believe the media.

So, if Herschel is being accused of being evasive and deceptive, even if he’s not, people will still tend to believe the charge, especially if it’s coming from a reporter. They might be slightly more skeptical of obviously the Democratic opponent who’s motivated in the zero-sum game to tear down Herschel.

It’s a smart strategy of Warnock to present these ads showing, “It’s not just me saying it. Look at what other media are saying.”

Grady Research Radio: I follow the logic that if you say someone is dodging a question people are inclined to believe that. But is that really a big deal? Does it really affect people?

David Clementson: Right. I’ve run some experiments showing just what happens in someone’s cognitive processing when there is an allegation of evasion.

I’ve run experiments that show that if people think a politician is trying to keep them from thinking about something, that triggers rumination. All this research in cognitive and social psychology describes the detriments of obsessing over something.

So, if Herschel was asked about his stance on X issue, and he didn’t want you to think about it, he tried to deflect that question, that can very well cause rumination in voters’ minds. It causes them to obsess over it and to want an answer even more.

So, when Warnock is out there telling people, “Look, a reporter asked Herschel about this ex-girlfriend or this child or abortion and he wouldn’t answer the question,” that triggers rumination, which then plays this key role in depressing the trustworthiness in the candidate.

Grady Research Radio: Speaking a little bit more about how Warnock is accusing Walker of dodging questions, do you believe that has the power to flip any votes or motivate a higher voter turnout?

David Clementson: I think it can definitely depress turnout, and it can proverbially splash on other things. By accusing Herschel Walker of being deceptive and dishonest, not answering questions, running away from reporters and not wanting to debate, you are not just imputing his integrity, his character, but questioning his trustworthiness entirely, which can then splash on everything else. If you can’t be trusted, then what else matters? Why would you vote for somebody if you can’t trust them, if you can’t take their word for it?

So, yeah, I can see it having a depressing effect on turnout, demoralizing the base, which is why Herschel would need to be getting out in front of that more, being more forceful in defending against it.

Grady Research Radio: This is semi-speculative, as is a lot of this, but the libertarian candidate received roughly 2 percent of the vote. Do you foresee those 2 percent of voters being motivated to come out to vote in the runoff?

David Clementson: Given that they were inclined to not vote for either Herschel or Warnock, you would think, well if they weren’t motivated in the general election when they were already going to be turning out, why would they turn out a month later in a runoff when Herschel and Warnock are the only ones on that ballot?

But, at the same time, they’re libertarians, who are conservatives — even more extreme than conservative Republicans. You have Herschel wanting limited government and libertarians wanting no government. So they’re going to be siding ideologically with Herschel Walker.

Whether they’re going to be motivated to turn out, I mean, that’s a crucial 2 percent. Even the libertarian said during the campaign that he knew he was being a spoiler. He knew he wasn’t going to win, but he at least wanted to be on the ballot and motivate a runoff.

So Herschel could be focusing on those kinds of folks, hammering his own conservative ideology to keep them motivated. And we see a lot of ads from Warnock reminding his supporters that the race was really close, no one got 50 percent, we’ve got to bring this over the finish line. I haven’t seen those kinds of ads from Herschel.

Grady Research Radio: What do you believe is Walker’s best approach going into the runoff?

David Clementson: Going back to what we were talking about — his veracity, his trustworthiness being impugned — I think he needs to fight fire with fire and refute these allegations that he’s being deceptive. I think he should also be honing in more on a message.

Now, you could say Warnock doesn’t really have a message either. He’s just attacking the opponent. But, if Herschel wants to do the same thing and fight fire with fire, he should be more laser focused on that. He could be turning around the same kind of accusations against Warnock, because there are certainly clips out there of instances where Warnock would dodge questions in press gaggles and debates also.

Grady Research Radio: Based on your studies, why do you believe that refuting is a good tactic for candidates?

David Clementson: I’ve run experiments on this very thing. This series of experiments that I’ve run have shown that a politician absolutely has to refute an allegation of deception lodged against him.

But my experiments show that it’s not just about the verbal communication of refuting, like saying, “No, I did answer that question. You’re falsely accusing me.” You’ve also got to have a believable demeanor at the same time, which really gets us into some deep behavioral scientific research.

And Warnock, we see, is good about modifying his nonverbal behavioral impressions in the face of charges that are lodged against him. I think Herschel is pretty good too. We saw instances in the debate where Herschel was really good at keeping his demeanor together.

The words really don’t matter as much as having a believable demeanor. Whether you’re a Democrat or Republican, it will carry more weight in regards to voters believing what you’re saying.

Grady Research Radio: We spoke about this a little bit at the beginning, but what do you anticipate voter turnout looking like for this runoff election? And do you believe the runoff will benefit one candidate over the other?

David Clementson: Well there are a few factors here. One is that if the majority in the U.S. Senate hinged on this election, then people all over the country — practically all over the world — would be parachuting in. It’d be even more of a circus than it is right now if all of Congress rested on who wins this race. Turnout would have been just off the charts.

Fortunately for those of us who want some veritable peace in our lives, it’s not that way. So, ironically, the candidates are really having to bolster turnout themselves with the kinds of messaging and events that they’re doing and media outreach.

Now to your second part of the question — simply because the general election midterm had the libertarian spoiler on the ballot, siphoning off conservative voters, you’ve got to think it would benefit Herschel to get another shot at it without the libertarian on the ballot mudding things. But, yeah, we’ll see.

David Clementson: Yeah. Thanks for having me.