The value of radio broadcasting was celebrated Aug. 29, 2017, at Grady College in observance of the 30th anniversary of WUGA-FM and the 50th year of public broadcasting.

WUGA Day at Grady, hosted by the James M. Cox Jr. Institute for Journalism Innovation, Management and Leadership, kicked off with a live recording of GPB’s “On Second Thought” with Celeste Headlee in Studio 100. Special guests Steve Inskeep, host of NPR’s “Morning Edition,” and Marilyn Geewax, NPR senior business editor and economics correspondent, lectured in classrooms later in the day.

“Celebrating WUGA’s 30th birthday was a way for us to reflect on the importance of public broadcasting and to demonstrate for our students the role it plays in our media landscape,” said Keith Herndon, director of the Cox Institute, who coordinated the event.

“Dean Charles Davis, the faculty and students of Grady have provided support in so many ways,” Sanders said. “Grady interns are always talented, enthusiastic and they have a great work ethic.” He added: “Overall, Grady College helped make our anniversary events even bigger and more significant by hosting these events. We greatly appreciate Keith Herndon’s leadership in working with us as we brought GPB’s ‘On Second Thought’ broadcast to Grady. The show taping went very smoothly and I know our broadcast audience was excited to hear this statewide program originating from Grady.”

The studio audience watched as Celeste Headlee maneuvered between three segments: an interview with members of the legendary Athens rock band Pylon, a discussion with Marilyn Geewax about the economy through the lens of recent jobs reports, and a debate with Athens-area stakeholders—including students—about how to handle Confederate symbols locally and nationally. (The hour-long episode aired Wednesday, Aug. 30, and is available online.)

Following the recording, Headlee spoke to the audience about the preparation she puts into each show, which includes researching, drafting questions for each interview and creating a story arc in her mind.

“If you’ve done your homework enough, you can actually respond to (the interviewee),” she said. “You’re kind of hoping they are going to say something surprising, because that’s what makes an interview interesting. But when they do surprise you, sometimes you have to throw out that thing in your head, what you’re intending to say, and really listen to what they’re saying.”

Headlee also recalled a time when someone walked out in the middle of an interview, and she had to remain professional and composed.

Already in town for another event for WUGA’s anniversary, Steve Inskeep offered advice to students during a visit to Barry Hollander’s Information Gathering class. He emphasized the value in researching stories in-person and not just online.

Inskeep also encouraged students to be creative with their approach when confronted with challenges on the job, like someone who doesn’t want to talk with reporters.

“Some of the best reporting you may do is when someone refuses to talk with you,” he said. “In those cases, the story is yours instead of them telling you what they want to.” Inskeep advised that reporters should research the closest approximation that they can when someone doesn’t want to talk and to “ask questions around the margins.”

Inskeep challenged students in interview situations to let their minds go quiet and figure out what is actually being said.

“You need to see what is in front of you instead of what you expect to find,” he said. “Don’t just go looking for the soundbite.”

Inskeep concluded his talk by encouraging students to write as much as they can and to be willing to look for stories where others are not looking.

Closing out the day, Marilyn Geewax told students in Keith Herndon’s Managing News Organizations class they should expect to work long, often difficult, days at the onset and throughout their careers in media. Gaining hands-on experience through internships is a good way to prepare, she noted.

“If you really want a top-level journalism job in today’s pace, you have to start young, learn all you can and stick with it,” Geewax said. “It really is a matter of capacity for pressure.”

View more photos from the day in the gallery below. 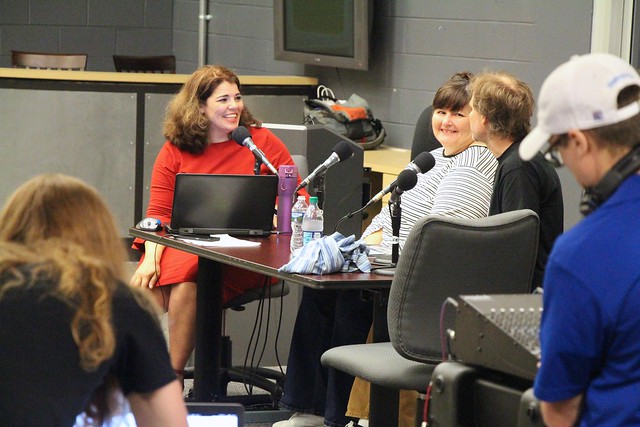