Nearly 1,200 PR leaders and professionals in the U.S. recently completed the survey again.

Juan Meng, associate professor of public relations at Grady College, was the co-investigator along with Bruce K. Berger, research director of the Plank Center at the University of Alabama.

Grades for leadership performance and trust were unchanged in 2017, but slipped for work culture, job engagement and job satisfaction. The overall grade for PR leaders fell from “B-“ to “C+.” Gaps between leaders’ and employees’ perceptions of the five areas remained wide, while gender differences deepened.

Women in public relations were significantly less engaged, less satisfied with their jobs, less confident in their work cultures, less trusting of their organizations and more critical of top leaders than men. Previous concerns about two-way communication, shared decision-making and diversity were again underscored by men and women.

Commenting on the results, Bill Heyman, CEO and president of Heyman Associates, co-sponsor of the study, said: “Social tensions in our world today have likely exacerbated these issues. We need to be bigger leaders to close these gaps.” 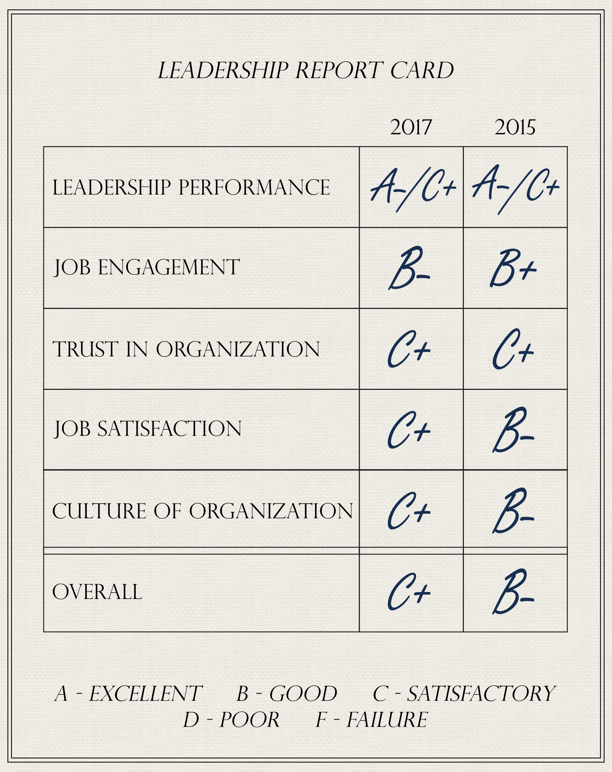 Performance of the Top Leader (A-/C+)

Leaders’ and their employees’ perceptions of the top leader’s performance again differed sharply: Leaders gave themselves an “A-,” while followers gave them a “C+.” The grades were virtually identical to those in 2015. Leaders received higher marks for ethical orientation and involvement in strategic decision-making but earned lower grades for their vision, relationship-building skills and team leadership capabilities. Men ranked top-leader performance significantly higher than women.

“This gap doesn’t necessarily mean leaders are ineffective,” said Meng. “Employees may be upset about other issues in their lives or unhappy with a recent assignment. But closing the gap is important because leaders influence all other issues in our study.”

Trust in the Organization (C+)

Culture refers to the internal environment, processes and structures that help or impede communication practices. This grade fell from a “B-” in 2015. The CEO’s understanding and valuing of public relations was rated highly, while that of other functional leaders was rated lower. Shared decision-making practices and the presence of two-way communications and diversity were graded far lower. Top leaders rated cultural factors higher than those at other levels. Women rated all cultural factors lower than men—and shared decision-making power a great deal lower. Agency professionals rated culture highest among organizational types.

Progress in diversity in public relations in many senses remains painfully slow. For women in the survey, it appears that being successful in the field is still challenging; the pay gap is real; the opportunity gap is real; and the being-heard-and-respected-gap is real. These gaps require attention and action, and the power to act resides in the minds, hearts and hands of current leaders at all levels in the profession.

“The purpose of this biennial report is to assess leadership in PR and identify enrichment opportunities,” said Berger. “If we identify the gaps and work to close them, we strengthen our profession’s leadership—a crucial strategic asset. The 2017 Report Card underscores the continuing gaps and the need to act.”

A full report of the research is available at: plankcenter.ua.edu