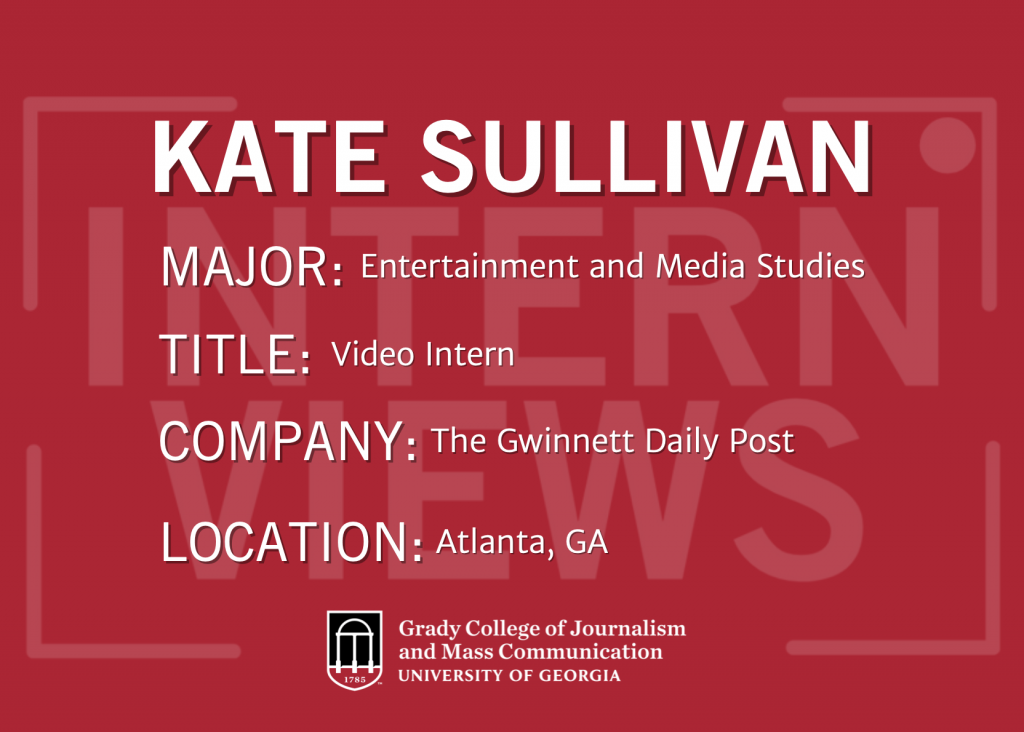 Briefly describe your internship and responsibilities.

My internship involves me traveling to the Atlanta area three times a week to capture interviews with intriguing people. A typical day in my internship is waking up early, traveling usually at least an hour to northern Atlanta to interview maybe a high school football player, a Gwinnett County swim league medalist, a Girl Scout camp director, a turf company president or even an employee at the PGA tournament. After I get all my interviews and videos of b-roll footage of the events, I go back home and edit it all on my computer within a few hours. Lastly, I upload the video to the Gwinnett Daily Post’s YouTube channel and show it to my boss. The next day, there are usually hundreds of views on the video.

What does the structure of your internship look like?

My boss will email me a few opportunities every week and I can take those opportunities to film, edit and post — or not if for some reason I can’t. I would say this internship is a hybrid (both remote and in-person). It is in-person 50% of the time because I have to go to events, film things and interview people, but it’s also remote because the rest of the time I am editing and posting on my computer alone.

The biggest challenge I have faced so far is feeling like a fish out of water. Most of the things I’ve already worked at haven’t been super huge events (except for the first two that I did). My first assignment was for the Gwinnett Stripers Triple-A baseball team and my second assignment was for the PGA Tournament, which is a national professional golf tournament. During the Stripers game, I was excited to be there but also convinced that something was going to go wrong, or I was not going to get enough footage. Because of that fear, I ended up getting approximately three times as much footage that I needed. Also, I forgot to bring my computer to the game because I didn’t think I would need to start editing at the stadium, but the game ended later than I thought, so I didn’t start editing until midnight and finished around 4 a.m. At the PGA Tournament, I was feeling a little bit more prepared since it wasn’t my first time doing something for the internship. But I also expected to be “just one of the media people that everyone ignores when she asks you to do an interview.” That couldn’t have been farther from what I experienced. Everyone was so nice at this tournament: the valet person, the front doorman, the rest of the media team, even the golfers. I surprisingly got to interview a few golfers, including the winner, which I was a little starstruck about. Now that I’m getting the hang of these events that I’m covering, I have much more confidence and feel like I can do any event anywhere alone and film it like a pro.

How have you used what Grady has taught you to excel in your internship?

I know Grady has prepared me for this job in several ways. One thing I will always remember is the ongoing lectures in Dr. Hamilton’s Intro To Media Studies class two years ago where we talked about angles on a camera for hours. Angles are super important. They just are. A big thing I’ve also learned throughout all of my Grady courses is communication skills. I know how to talk to someone properly now. I know how to email someone who I’ve never met and ask if they’d be willing to do an interview with me. I know how to have confidence and not be awkward in a professional setting.

What’s your advice to other students looking for a similar opportunity?

My advice to other students looking to take on a similar role is just don’t hesitate to reach out to those opportunities that may seem far away or not as fun or impossible to get. I had applied to Grady LA — a study abroad program — for this summer, but before I knew if I got it or not it was cancelled again. Luckily, I heard from a distant friend of mine that she emailed this guy asking if they had internships, and he just made her an internship because they had both worked at The Red & Black at UGA. Since I also worked at The Red & Black in the past, I emailed the same guy and asked for the same internship. Because of this lucky networking, I got the job. I wouldn’t be doing anything else right now or getting course credit like I am if I had not reached out. The worst people can do is say no.