Editor’s note: This is an example of many different podcasts our alumni produce. Visit our Alumni Who Podcast Pinterest page for a full list.

Award winning political strategist, radio host, CNN contributor, and Grady grad David Mowery is the co-host of Now! More Than Ever, a new podcast from Send The Food Back Media. 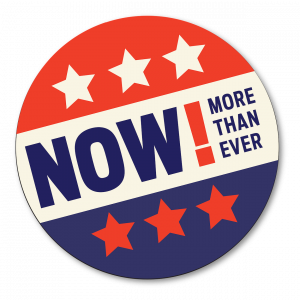 Mowery and his longtime friend (and fellow UGA graduate) Chris Krauth feature guests from the world of politics, media, music and real life. Through their podcast, Mowrey and Krauth explore not only the nuts and bolts of their professions, but also the journey. According to the podcast’s website, this includes “the unheard sound, the unlived life, but also the shared experiences that bind us all.”

David Mowery graduated from the University of Georgia’s Grady College of Journalism and Mass Communication in 1999. After earning his degree in journalism, Mowrey started an externship in Washington, D.C. for Edelman.

Mowery’s professional journey took him to Montgomery, Alabama where he currently resides and works as a political campaign consultant. Along the way, Mowery said he and Krauth started experimenting with the audio medium before podcasts were easily distributed.

While he knew something was drawing him to the idea of podcasting, he was hesitant of how to navigate it along with his work in the political sphere. Mowery was conscious of his potential impact on the politicians he was working for, so he put his podcasting idea on hold.

When his career led him to consult for a Senatorial candidate, he appeared on CNN multiple times. Mowery realized he enjoyed what he was doing and found himself wanting to “still have that energy” even after the campaign ended. This desire led him to attend and speak at conferences with the American Association of Political Consultants, which he really enjoyed until the COVID-19 pandemic began.

Finally, Mowery had the time and the confidence to launch a podcast alongside Krauth. The two worked and learned together as they built the podcast series. Mowery says one of their goals was not to discuss what was already at the forefront of the political conversation.

Krauth and Mowery worked on the podcast for about six months. Eventually, Mowery decided it was time to look for guests to feature on the show.

“I wanted to bring on guests from my industry and have them talk about both the challenges and opportunities of the industry, but also their origin story,” Mowery said.

Mowery says he was at first hesitant to have guests on the show because he “wasn’t sure if people would get it.” After receiving advice from a friend who encouraged Mowery in his own skills and abilities, he decided to take the leap.

What he realized is that he has a “public persona and positioning in [his] field that helps draw guests to it.” This realization has not only led to incredible guests on the podcast, but also an increase in Mowery’s self confidence.

Additionally, Mowery says he has had a shift in perspective when looking at business. Now, he said he realizes that the people he has on his show can help him drive business.

In the past, Mowery says he believes having a side hustle along with a day job was viewed as a negative. While before it was worried having a podcast on the side would make him less desirable as an employee, he says now it’s a “feature not a bug.”

As he has grown in his professional journey, Mowery says the Georgia connection has remained strong. During his time in the industry, he says he has met other fellow UGA grads.

Despite all his success, Mowery says he credits a lot of what he’s done to his time in Grady.

“Almost everything that I’ve done in my career, I can trace to the education that I got at Georgia, at Grady.”

You can listen to Mowery’s podcast here.