Longtime WSB-TV evening news anchor Monica Kaufman Pearson (MA ’14)  has been named as the next chair of the Peabody Awards Board of Jurors, making her the first African American woman to lead the prestigious program’s judging body.

Pearson has been a trailblazer for her entire career in the Atlanta area. She was the first woman and first minority to anchor the daily evening news in the city at its leading station, WSB-TV, where she worked for 37 years. She won more than 33 Southern Regional and local Emmy awards for her reporting and anchoring, as well as for her celebrity interview show, Closeups. When she retired, she was recognized on the floor of the U.S. House of Representatives by a bipartisan Georgia delegation for her decades of service.

Since her 2012 retirement, she has earned a master’s degree from Grady College, hosted “This Week in Black History” for KISS 104.1 FM, and co-hosted the Emmy-nominated Georgia Public Broadcasting show “A Seat at the Table.”

She has served on Peabody’s Board of Jurors since 2015. “I have valued the opportunity to recognize the best in broadcasting in my work with Peabody for the last 6 years,” Pearson said. “It is an honor to step into a leadership role with this esteemed group of industry colleagues that celebrates the ways skillful storytelling can unite us and illuminate truth in these critical times.”

“Monica is not just an Atlanta treasure—she’s a natural leader whose strength, warmth, compassion and humor always makes the board’s deliberation smarter and, frankly, a lot more fun,” said Jeffrey Jones, executive director of the program. “We are honored that she has agreed to serve us as board chair this coming year.”

Peabody has also appointed Vanessa K. De Luca, Hannah Giorgis, Nicholas Quah, Kent Rees, Mark Ruffin to its board of jurors, which each year bestows the Peabody Awards for excellence in television, radio/podcasting, and digital media. The program is based at Grady College.

“We are honored to have such accomplished industry leaders contributing to our mission to recognize quality media programming of the highest standard. These experts are the perfect choice to help us spotlight works that best reflect the issues and voices of our time,” said Jones.

Vanessa K. De Luca currently serves as Editor-In-Chief of The Root, overseeing the publication’s editorial vision and content creation across all platforms. Most recently she served as the Editor-in-Chief of ZORA magazine and helmed ESSENCE magazine. An award-winning journalist and co-author of the bestselling beauty and empowerment book Tyra Banks Beauty Inside & Out, she has been a featured guest on several national television networks, including NBC’s TODAY Show, CBS This Morning, MSNBC’s Morning Joe, CNN and more.

Hannah Giorgis is a staff writer at The Atlantic. In a recent cover story, “The Unwritten Rules of Black TV,” Hannah presented a definitive look at Black representation behind the camera, and the progress and roadblocks for creators whose voices have too long been ignored. Her essays, criticism, and reporting have appeared in publications including the New York Times magazine, New Yorker, The Guardian, Bon Appétit, and Pitchfork. Most recently she co-wrote Ida B. The Queen: The Extraordinary Life and Legacy of Ida B. Wells with Wells’ great-granddaughter, Michelle Duster.

Nicholas Quah is the podcast critic at New York Magazine’s Vulture and a contributing critic at NPR’s Fresh Air. One of the earliest journalists dedicated to covering the podcast industry, he is also the founder of Hot Pod, widely considered to be a leading trade newsletter covering the podcast business, which was sold to Vox Media. Originally from Malaysia, he has a B.A. from Wesleyan University, an M.A. from the University of Chicago, and was a Visiting Nieman Fellow at Harvard University in 2017.

Kent Rees is an industry-leading digital and content marketing strategist. He is currently the general manager and chief marketing officer for FAST Studios, a company that owns and operates ad-support streaming TV networks. Prior to that, he was the Chief Marketing Officer for Pop TV and the EVP and General Manager of Pivot. Mr. Rees went to NYU Film School and has been an adjunct professor at Emerson College since 2018.

Mark Ruffin is the program director of the Real Jazz channel on SiriusXM. Before that he spent over 25 years as a fixture in jazz broadcasting and journalism in Chicago, winning two Emmy Awards for his efforts to bring stories about jazz to television on WTTW-TV. Mr. Ruffin worked as the jazz editor for Chicago Magazine and has written hundreds of articles on jazz, broadcasting and African-American culture. In 2020, Mr. Ruffin released his first book, Bebop Fairy Tales: A Historical Fiction Trilogy on Jazz, Intolerance and Baseball.

The Peabody Board of Jurors is made up of media industry professionals, media scholars, critics and journalists, appointed by the program’s executive director to a renewable three-year term of service.

Each year, this mix of top-level thought leaders names 60 nominees from which they then select The Peabody 30—the best programs that achieve the highest standards in media and storytelling across genre and platforms.

Along with Pearson and the new jurors, the current board of jurors also includes:

Respected for its integrity and revered for its standards of excellence, the Peabody is an honor like no other for television, podcast/radio, and digital media. Chosen each year by a diverse Board of Jurors through unanimous vote, Peabody Awards are given in the categories of entertainment, documentary, news, podcast/radio, arts, children’s and youth, public service, and multimedia programming. The annual Peabody winners are a collection of 30 stories that powerfully reflect the pressing social issues and the vibrant emerging voices of our day. From major productions to local journalism, the Peabody Awards shine a light on the Stories That Matter and are a testament to the power of art and reportage in the push for truth, social justice, and equity. The Peabody Awards were founded in 1940 at the Grady College of Journalism and Mass Communication at the University of Georgia and are still based in Athens today.

Most Grady College students arrive seeking knowledge in their chosen field. Monica Pearson (MA ’14) is an alumna because she wanted to share her knowledge of journalism and Georgia.

Pearson is an award-winning journalist who informed generations of Georgians in her 37 years at WSB-TV in Atlanta. She was a broadcast journalist for a total of 45 years. 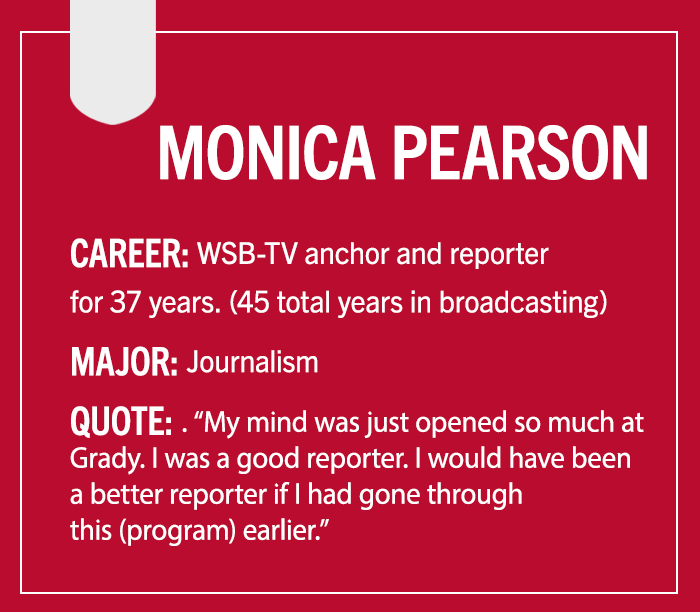 In pursuit of the credentials needed to teach journalism after her days on the nightly anchor desk, Pearson earned her master’s degree from Grady College in 2014.

“My mind was just opened so much at Grady,” Pearson said. “I was a good reporter. I would have been a better reporter if I had gone through this (program) earlier.”

Pearson is the first woman and first minority to anchor the daily evening news in Atlanta. She has won 33 Southern Regional and local Emmy Awards for reporting, anchoring and her Closeups celebrity interview shows.

She is currently a regular radio voice on KISS 104.1 FM and continues her Closeups interviews for WSB.

We are celebrating our 2020 Alumni Award winners as their Grady Salutes celebration was postponed due to the coronavirus pandemic. Visit this page for the latest updates on Grady Salutes.

Editor’s note: this is the first in a series of Grady College alumni profiles celebrating Black History Month. Monica Pearson can be seen delivering the Holmes-Hunter Lecture on Feb. 7, 2019, at 2 p.m. at the UGA Chapel.

Her face, along with her voice, is one of the most recognized in Atlanta.

When Monica Pearson (MA ’14) retired in 2012, she had been on the air on WSB-TV for 37 years and had been a trailblazer for journalism…for female journalists…and, for African-American journalists, serving as the first African-American female to anchor the evening news in Atlanta.

This award-winning journalist who has been an inspiration to countless students and one of the most trusted journalists in Atlanta, is about to add another honor to her resumé—that of keynote speaker for the University of Georgia’s Holmes-Hunter Lecture.

“This is profound,” Pearson said about the invitation to deliver the lecture named after her family friend Hamilton Holmes and fellow Grady College alumna Charlayne Hunter-Gault (ABJ ’63).

In an interview two weeks prior to the lecture, Pearson admitted that the weight of delivering a message that reaches all ages and sends a clear, yet hopeful, message, is not lost on her.

“One of the messages I want to get across is to question how we still have racism front and center in everything we do and everything we see,” Pearson said citing examples of the protests in Charlottesville, Virginia, and insensitive pictures young people take. “I am fascinated about why that hasn’t changed.”

Despite examples of continued racism, she remains positive about steps being made. For example, Pearson reflected on meeting three students recently who had won an essay competition on the subject of race relations. While two of the essay winners were African-Americans, the third was Caucasian. She was struck by the home experiences of all the winners, but especially the fact that the Caucasian student spoke of valuing people for who they are and not how they look.

“They see the humanity first. They see the sameness rather than the things that distinguish us as being different,” Pearson said, reflecting on another theme she plans to share during her talk.

Pearson continued with another theme she has considered talking about: “When you hear someone say ‘I don’t see color, I’m color blind,’ that’s an insult to me, because if you can’t see my color and you can’t begin to think of what I might have been through as a person of color, then you are denying me my right, my humanity. So, I want you to see me with my color and understand what I might have been through, or, at least ask, rather than assuming certain things about me. It’s simply a point of respect.”

She will have to make time to work on her talk because her schedule has not slowed down since her retirement. Pearson returned to school and earned her master’s degree in journalism from Grady College. She has maintained an aggressive schedule of public appearances, and she can still be heard on the airwaves through her weekly radio show on KISS 104.1, and seen on her newest show, “A Seat at the Table,” a Georgia Public Broadcast production.

Pearson’s passion for journalism continues to shine through and she is always happy to offer advice to journalists.

“Be inquisitive and read, read, read,” is the first piece of advice she offers young journalists. “And, don’t be afraid to ask the question that your mother told you never to ask,” Pearson said, further explaining that reporters are there to represent the viewer, the reader, the listener. She also advises young journalists to listen and not just go through the list of questions they prepared ahead of the interview. “If you are really listening, it can take you into a different realm and give you a much better story.”

Finally, she advises that journalists should focus on reporting, not just anchoring.

“Sure, the anchor is the face, but the reporting is the bread and butter. If you are a good storyteller…a good interviewer…you will have a job forever.”

In addition to her other responsibilities, this is the time of year that Pearson’s job as a member of the Board of Jurors for the Peabody Awards steps up with evaluating entries.

“Peabody has been the hardest job I have every loved,” Pearson said with a smile on her face. “I have seen some amazing reports. I’m talking about life-changing, world-changing reports.”

Each judge studies countless hours of programming of reporting series, and unlike other awards, Peabody judges come to a unanimous vote on the final winners.

“The unanimous vote is what makes the Peabody special, and the Peabody is the most prestigious award in journalism to me. When you see the quality of work that we have to review, it’s hard.”