Mennah Abdelwahab grew up in Bogart where she was one of the few Arab Americans in town. Her parents were raised in Egypt and her family is Muslim. She said that this, combined with growing up in a working-class family, gave her a unique perspective and made her want to help others and get involved in policy work, two things she has definitely accomplished during her time at the University of Georgia.

In fact, she and her twin sister just won an award celebrating their service to the community. Ayah and Mennah Abdelwahab were selected as UGA Presidential Award of Excellence recipients, which recognizes the top 1 percent of UGA undergraduates who excel not only in academics, but also in service to the community and leadership, both on and off campus.

Mennah said her UGA classes combined with her internships during college helped her find the necessary tools to do something about fixing some of the barriers she faced growing up. “I didn’t have the most elaborate understanding of how these issues are addressed or changed until I got to UGA,” she said. “My education and my internship experiences are helping me understand a lot of the more systemic issues. I started to realize that a lot of these things are policy issues.”

During her time at UGA, Mennah has taken every opportunity to learn and participate. She’s been co-director of the Student Government Association’s Diversity, Equity and Inclusion program, a Grady Ambassador, a Morehead Honors College teaching assistant and a CURO Honors Scholar. The graduating senior has two majors—journalism and international affairs—as well as two minors, Arabic and law, jurisprudence and the state.

“I came to the University as an international affairs major,” she said. “My goal was to help people, and I was trying to learn more about systemic issues in our society. I ended up adding a Journalism major to figure how to properly condense these issues in a way that is approachable and understandable to people, but also in terms of ‘This is why this policy is bad’ or ‘This is why we should pass this policy.’”

In her sophomore year, Abdelwahab started working for Georgia state Rep. Spencer Frye as a legislative fellow. In the fall, students conduct policy research on a topic of their choosing. In 2019, one of the things Abdelwahab researched was rural broadband access. “It wasn’t something that was really talked about then and it’s been cool to see something I did research on get more traction,” she said, noting the improvement in Georgia’s rural broadband access since the passage of the infrastructure bill.

In the spring semester, the fellows spend lots of time at the Capitol, hitching rides with Frye for the drive to Atlanta. “We’d arrive at his house at about 5:30 in the morning then go on our merry way,” she said. Often, they’d get back to Athens at 9 p.m. “They were long days but also really fun. We got the opportunity to go to committee meetings, watch sessions and read different legislation.” For the past two years, Abdelwahab has served as Frye’s public relations director.

If Abdelwahab ever needs to commiserate about what’s happening in her life, she can turn to her twin sister, Ayah, who has an especially expert perspective. Ayah Abdelwahab is also an international affairs major (although her second major is economics) and is the director of legislative research for Frye. The two share tips on their ongoing internships or just provide the comfort of someone who really does know exactly what the other is going through. “You never really feel alone, which is great,” she said.

After graduation she will spend the summer in the Muslim Public Affairs Council’s Congressional Leadership Development Program. “I’ll be in training for a congressional office, and then after that, I’ll be looking to work in jobs that are in the policy research area,” she said. “My interests are very broad, which is a good thing, but it also makes looking for jobs kind of difficult because I am interested in so many different things.”

Her best advice for fellow go-getters?  “One of the things that college has shown me is that showing up and being engaged will benefit you so much in ways that you don’t even recognize,” she said. “I’m not under the impression that I’m the smartest or most accomplished person in the room, but I do try to make the most of being there and getting the opportunity to engage with the school and different people. Even when I’m a little exhausted—or very exhausted—I try to come back to this idea that if you are the person in the room who is engaged and trying and clearly shows that they care, it will reap so many benefits in the future.”

Abdelwahab said she encourages students to make sure they balance this desire to be as engaged as possible with their mental health needs. “I have been blessed to have the support of my friends, family, professors and UGA administrators and staff to make sure I feel as supported as possible. These individuals have been instrumental in my college career, and I encourage all students to find that supportive community by taking advantage of the variety of resources available on campus.”

Editor’s Note: This feature was originally appeared on the UGA News website.

Why did you choose Grady and your course of study?

I came into UGA as an international affairs major, and while I loved my IA courses, I felt I needed experiences that would push me out of my comfort zone. I was always fascinated by the media, particularly how it operates and the power it wields over our lives. I also felt that being a strong communicator would serve me well in any job I would pursue later. My first Grady class was pretty small and very discussion based, which I really loved. I was motivated to continue pursuing my Grady degree because my Grady professors have been incredibly supportive; it has meant a lot to see everyone want you to succeed.

I don’t know that I have just one professional hero. I have personally gotten to work with so many amazing people and they have all inspired me in their own unique way. I think one thing they have all shown me is the importance of truly caring about the people you work with and wanting to see them succeed. When people see you are willing to invest in them, they will also be willing to develop a stronger relationship with you.

Tenacity means pushing yourself out of your comfort zone to reach your goals. Whether in Grady or any other college, you will get out of your classes as much as you put in. I remember the first time I had to interview a source for my journalism class; I was terrified. Yet, the more I have interviewed sources, the more comfortable and natural it has become. So, no matter how scary or nerve-racking accomplishing an assignment or personal goal may be, go for it!

What is your favorite app or social media channel and why? 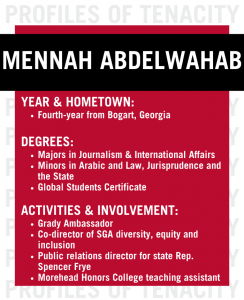 WhatsApp is definitely an underappreciated tool. It’s pretty popular in other parts of the world but it’s not really that well known in America. Personally, I have found it to be a really great way to stay in touch with my family in Egypt and elsewhere around the world.

During my sophomore year, I was studying for an Arabic test in the PAF, and Dean Davis walked up to me and started asking me questions about what I was writing, what it meant, etc. I think this was the first time I had ever talked to the dean, but I just remember how approachable and genuinely interested he was. As a Grady ambassador, I have gotten to interact with the dean a lot more, and I think this it is always great to see how much he wants to connect with students and learn from their experiences.

What is the best piece of advice you’ve received from an instructor, mentor or family member?

I think the best piece of advice I have received in college is that you don’t have to have it all figured out during college or immediately after graduation. A lot of my professors have taken varying, winding paths to get where they are now. It is great if you know from now what you are interested in and the career you want. It is also equally valuable to know that you are not 100% set on one job or career and to be open to trying new things.

What is an example of a time you used your studies and skills in a real-world experience?

My journalism major has been crucial to many of my professional and extracurricular experiences. Currently, I serve as the Public Relations Director for State Representative Spencer Frye, where a central part of my job is clearly communicating policy issues to a wide audience. In my work with the Human Rights Measurement Initiative, I have helped prepare online content in both English and Arabic. Additionally, my work with the Office of Congressman John Lewis involved preparing internal and external documents to assist legislative staffers and our constituents. These experiences built off of the skills I have attained in my journalism classes. In other roles, such as SGA Senator and Director of DEI, ICNA Relief Clinic Outreach Coordinator, and Honors Teaching Assistant, I have seen myself become a lot more comfortable interacting with new people and thinking of how to communicate my thoughts and opinions.

What has been your proudest moment in the past year?

I spent the entire summer in D.C. which was really cool. I definitely pushed myself to be a lot more adventurous than I normally am but actually had a lot of fun. I went kayaking on the Potomac, which was a pretty neat place to go kayaking for the first time. I also got to know a lot of people in Delta Hall, which was also wonderful. Additionally, I really used the skills I gained in my photojournalism class; I think I took 1000+ photos over the summer.

What would people be surprised to know about you?

Where is your favorite place on campus and why?

It’s a little farther away than most things, but I think the botanical garden is absolutely gorgeous. I have also had the chance to go to UGA’s Skidaway Institute of Oceanography down in Savannah and it is also amazing. One of my favorite experiences I have had at UGA is going there during the Public Service and Outreach weekend where we got to go on a boat tour in Savannah and see dolphins!