Larry Hobbs, a feature writer and reporter at The Brunswick News (Brunswick, Georgia) has been named the recipient of the 2020 Rollin M. “Pete” McCommons Award for Distinguished Community Journalism.

This award, presented during Grady Salutes on Friday, April 29, recognizes Hobbs for his initial and subsequent reporting on the murder of Ahmaud Arbery.

“I am thrilled that Larry Hobbs is this year’s recipient of the local journalism award endowed in my name by Grady Thrasher and Kathy Prescott,” said Pete McCommons, the publisher and editor of Flagpole Magazine in Athens. “Larry is a great example of the local reporter who doggedly follows a difficult story in spite of all the other assignments that compete for his time and attention.”

A Lower Alabama native and 1984 graduate of Troy University, Hobbs spent the bulk of his early career working for Florida newspapers, including the Palm Beach Daily News and the Palm Beach Post, among others. He started writing for The Brunswick News in 2014, roughly six years before the Ahmaud Arbery shooting.

“Larry Hobbs and his colleagues at The Brunswick News did what journalists do: they heard of a potential misjustice, they investigated it, they demanded accountability from those in charge, and they ultimately saw one of Brunswick’s, and Georgia’s, most horrific acts to its conclusion. They performed journalism, at its finest,” said Charles Davis, dean of Grady College.

In this case, Hobbs began reporting on the Amhaud Arbery shooting the day Arbery died. Hobbs’ relentless reporting was picked up by national media organizations, including Time, CNN and Poynter, among others, and depicted as a catalyst for the Amhaud Arbery trial.

“Larry’s reporting was important in many ways, and we are glad to have this opportunity to honor him for the work he did,” explained Kyser Lough, the chair of the McCommons Award Committee and an assistant professor in Grady’s Department of Journalism.

“Even before this award, I have been using Larry’s reporting on the murder of Ahmaud Arbery in my classes as an example of the importance of local, community journalism, and I know other journalism professors have been too,” Lough added. “While this year the award went to a reporter in our home state, it’s important to remember that this is a national award and we accept nominations from across the country.”

In Hobbs’ comments accepting the award, he gave credit to his team at The Brunswick News for fueling their publication. He also made a point that he doesn’t consider himself or his colleagues heroes — just people “doing their jobs.”

“Truth more often thrives in communities where newspapers abide,” Hobbs continued. “Those in positions of public trust are held accountable when newspapers simply do their jobs. When an ugly truth hid behind the senseless killing of Ahmaud Arbery, The Brunswick News did its job. We covered this sad story relentlessly from the day it occurred right up until justice was served in both state and federal courts. We owed that to our community, and to Ahmaud and to his family.”

This sentiment was also expressed by Janice Hume, the head of the Department of Journalism, while introducing Hobbs.

“It was Mr. Hobbs’ attention to detail and dogged reporting that brought the story of Ahmaud Arbery’s murder first to local and then national attention,” said Hume. “Without the work of a local journalist who understood and cared about his community, there would have been no justice for Mr. Arbery’s family. Local journalism matters, and Mr. Hobbs’ work is a fine example of why. We are grateful for his service to the Brunswick community and beyond.” 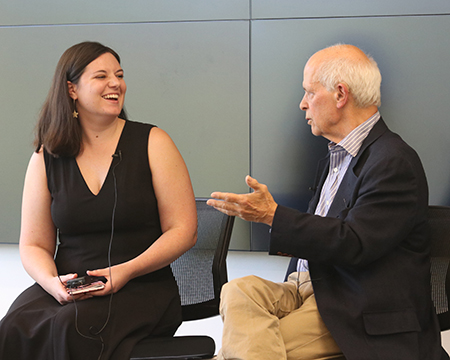