Marillyn Heigl is a fourth year student majoring in advertising, international affairs, romance languages and Latin American and Caribbean studies. Heigl is a strong believer in lifelong learning and a lover of stories, and her college experience has been heavily impacted by the organizations that she is involved in on campus.

Why did you choose your major? 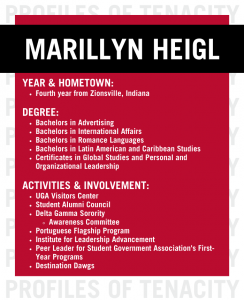 For a very long time, I had no idea what I wanted to study in college.Admittedly, it’s stressful to be surrounded by people who seemed like they’d known they wanted to be doctors or lawyers since middle school when you’re struggling to figure your future out. But, that all changed in December of 2016 when I watched Google’s 2016 Year in Search. I watched that video practically on a loop obsessively. That video did such a beautiful job of capturing the rawness of that year and making it into something beautiful. Even now, I cry like a baby every time I watch it and look forward to the new Year in Search every single December. I remember realizing how powerful it was that a video produced as a way of promoting a company could be so moving. Because of that video, I realized I was interested in studying the ways that communication can influence emotions, thoughts, and actions.

Who is your favorite Grady professor and why?

Right now I’m taking Telenovelas, Culture, and Society with Dr. Carolina Acosta-Alzuru as my final Grady class and she is absolutely fantastic. Dr. Acosta-Alzuru is the epitome of someone who has identified a personal passion and pursued it with determination. She is incredibly knowledgeable and her expertise never fails to blow me away. For anyone who speaks any Spanish, I would absolutely recommend taking this class with Dr. Acosta-Alzuru, I promise you won’t regret it.

What or who has had the biggest impact on your life during your time at UGA?

The most impactful part of my college experience has been having the privilege of working at the UGA Visitors Center as a tour leader. I applied my freshman year expecting to be turned away and was ecstatic when I got the phone call telling me I would get to do my dream job. I can’t begin to try to express all the ways working at the VC has changed my life. The job itself has made me more curious, a better listener, and comfortable with vulnerability. Getting to play a small part in such an important life decision for prospective students isn’t something I take for granted. Additionally, many of the people who work there, between my coworkers and bosses, are not just friends and mentors but also like family. When I walk into the VC I feel like Michael Scott from The Office — it’s my favorite place to be.

My most memorable Grady moment was when I found myself listening to the first minute of Birthday Song by 2Chainz on a loop for 20 minutes so I could remix it to be about Krystal, the fast food chain. For context, my advertising capstone had us present a campaign to promote Krystal’s new big chicken sandwiches and 2Chainz had been named their new head of creative marketing. That remix is honestly the weirdest thing I have ever created for a class but it was fun too.

What has been your biggest accomplishment in the past year?

Back in April, I received the Student Organization Achievement and Recognition (SOAR) Award for Commitment to Peer Mentorship. I had the honor of being a Peer Leader for Connect, one of Student Government Association’s First-Year Programs, during the 2021-2022 school year and it was one of the most rewarding things I’ve done in college. I was able to walk alongside some very special freshmen as they navigated their first year at UGA and now get to watch them step forward as inspiring campus leaders. It was meaningful to be recognized for my investment in other students because it affirmed that I had paid forward the effort that my mentors have invested in me.

What is the best piece of advice you’ve ever received?

I live by the following advice from my parents: don’t let the classroom get in the way of your education. Yes, I came to UGA to get my degrees and graduate but education can’t be restricted to PowerPoint presentations and exams. Anyone hoping to be a lifelong learner needs to shift their mindset to where they seek to learn from experiences that aren’t traditionally academic. From watching interesting Netflix documentaries to traveling in new environments to the people I’m surrounded by, I find myself learning all the time. You don’t need to sit in a classroom to keep learning, that’s something I hope to never lose sight of.

My professional hero is UGA graduate Brandon Stanton, the man behind Humans of New York. Stanton moved to New York and survived off of unemployment checks while photographing portraits of New Yorkers to tell their stories. Since starting HONY in 2010, the whole thing has blown up. The Instagram is wildly successful with over 12 million followers, he has traveled all over the world and has sold many books full of the stories of the people he’s met. In fact, one of Stanton’s books is prominently featured on the coffee table in my apartment as I write this. Stanton is a master storyteller and has highlighted so many of the complexities and truths of the human experience. His work has touched the hearts of many, including mine. What I wouldn’t give to sit down and get a coffee with him, he must have the best stories to tell.

What are you planning to do after you graduate?

I am still figuring out the answer to this question and that’s okay. I have some extra time to figure it out, though. My application to do the capstone for UGA’s Portuguese Flagship Program is being reviewed and if selected I will be in Brazil in 2023 from February to December. I will go to a university there for four months and then get an internship and work for six. This is going to be a once-in-a-lifetime opportunity so while it’s a little terrifying, it’s also exciting. I’m hoping that the internship component of this 10-month program will provide me with more insight that will inform what direction I’d like to go in after graduating in the Spring of 2024.

What is one thing that people would be surprised to know about you?

A lot of people would be surprised to know that I went to an immersive language school in the middle of Indiana for 9 years.

Where is your favorite study spot?

Any dining hall where I can sip on a Dr. Pepper while I do my work with either my earbuds in or while chatting with friends!