How did you choose to major in public relations?

Honestly, I didn’t really know what I was doing when I picked my major. I knew I was broadly interested in marketing and in getting people to pay attention to good products or services, whatever they may be. It’s frustrating to me to see something cool, whether it’s a piece of music or a great service or a helpful product, that’s just not being marketed in a tactical way, so it’s not reaching anyone even though it’s good. That’s something I’m passionate about. I knew that I wanted to go Grady pretty early—I was drawn into the friendly, community feel that didn’t feel competitive. It felt like the people in Grady weren’t trying to prove too much, but more so were passionate about their studies and the work that relates to it.  I was actually pretty jaded about my major for a while and really toyed with the idea of dropping out for most of junior year, but as I’ve finally gotten deeper into my PR classes I feel like I’m getting some insights into the field of public relations and why it matters.

Who has been your favorite professor and/or class and why? 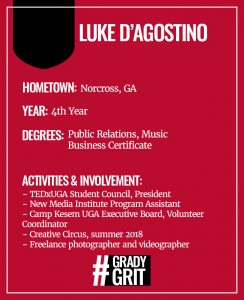 My favorite professor has been Jonathan Peters, who I had for Communication Law. I really enjoyed getting to think about how media law relates to so many of the things that happen on a daily basis – from unsolicited recordings to the President’s tweets – and Dr. Peters was absolutely hilarious, while still making the content easy to digest. He also really, really cared about us as students and people.

The best class in my major has hands-down been 5920, PR Communication with Tom Cullen. We’re working with real-world clients creating media kits, and Tom is refreshingly honest and true to his word in holding us to a standard of work that will make us employable. I feel like I’ve taken so many classes in college that I just got next to nothing out of, which is really, really frustrating in my position—when you’re growing a business outside of school, making real money and doing real work that you’re passionate about. It’s hard, to say the least, to care about them at all, and there have been many times in college when the reasons to leave were compelling. They still are, but much less so now, largely because of Tom’s class. I feel like I actually have an understanding of public relations, how to implement it with a client, and why it works instead of just relying on advertising.

What are you planning on doing after graduating with a Grady degree?

I am planning on moving to be with my girlfriend in a city by the water and establishing my freelance presence there. I’ve done all kinds of freelance work over the last few years—from music to non-profits to weddings to graduation to families to small businesses. I feel like I have an understanding of how to establish myself somewhere else – of course it would be easier to stay in Athens or Atlanta, where I have an existing network, rather than reestablish myself somewhere else, but I trust my ability, and I can barista on the side or something like that until I’m re-established. I want to shoot destination weddings, I want to tour with a major artist and make videos for them, I want to travel and document beautiful destinations and unique causes. I want to tell stories and be free and independent. None of that has to do much with a degree, but that’s my plan.

How do you think Grady students are unique compared to other students on campus?

Grady feels like a community. People are happy to be a part of this school, and they build each other up. I think we do good work, and people study the things they’re really interested in.

What is your favorite Athens restaurant? Or restaurants?

Utage, Athens Bagel, Ahi on Clayton. People will call Mama’s Boy overrated, but they just say that to be quirky and unique. Mama’s Boy still slaps, and people sleep on the banana bread.

Who is the best UGA mascot and why?

Megan Ward. She’s a bulldog that you don’t want to mess with, but she’s also like a loving mom to me. She’s also my boss.

If you won the lottery today, what would be your first purchase?

If high school you met current you, what would they think?

Oh goodness, I don’t want to think about high school me. High school me had some good foundations in place, but he sure had a lot to learn. I think he’d say, “hey, cool camera,” and “hey, I didn’t realize you’d already have your dad’s hairline, just three years later.”