For the past 20 years, Adam Pawlus (MA ‘01) has dedicated much of his career towards advocating for proper coverage of members of the LGBTQ community and promoting the need for diversity in newsrooms.

Currently, Pawlus serves as the executive director for NLGJA: The Association of LGBTQ Journalists, an organization of over 1,000 journalists, news executives, communications professionals and educators that serves as a strong voice in the news industry, educating newsroom decision-makers about coverage of the LGBTQ community, promoting non-discrimination policies and the establishment of equal benefits, and creating educational opportunities to support the next generation of LGBTQ newsroom leaders.

Following is a brief interview with Pawlus.

GC: What classes at Grady College did the most to prepare you for your career?

AP: I believe the balanced curriculum, including the practical, theoretical and skill-based course components that Grady College offered me as a master’s student, prepared me for a career in communications, as well as in nonprofit management. Twenty years after graduating, I may not be able to recite the five stages of the Transtheoretical Model of Change, but the analytical and critical thinking skills that were sharpened by the case studies presented as part of the curriculum have helped me through my career.

GC: What does LGBTQ Pride month mean to you?

AP: In the early morning hours of June 28, 1969, a group of LGBTQ people gathered outside of the Stonewall Inn in Greenwich Village and stood up to systematic discrimination and oppression in what has become immortalized as the Stonewall Uprising. That event was covered by the New York Daily News, under the headline “Homo nest raided, queen bees are stinging mad.”

These days, a headline like that would never fly (pun intended). Thanks, in part, to resources like the NLGJA Stylebook on LGBTQ Terminology, journalists across the country know that stereotypes and epithets like “homo” and “queen” are not appropriate for coverage.

In many ways, Pride month remains an opportunity to put a spotlight on the inequities faced by LGBTQ people and communities. Simultaneously, it is also an opportunity to publicly celebrate the people, successes and advancement the community has seen over the past half century.

On the most personal level, I see Pride month as an opportunity to celebrate the journey each of us in the LGBTQ community has taken in coming to terms with our own challenges, successes, milestones and self-acceptance. 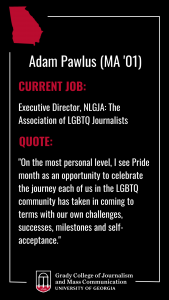 AP: Seek out allies and mentors who will support you to be your authentic self at work. Early in your career, it may be difficult to point out, and hold accountable, when you see people playing into stereotypes, using offensive, outdated language, or when you are on the receiving end of microaggressions. Find those leaders in your organization that can amplify your voice and help make cultural change when needed.

There are so many professional associations that have programs, scholarships, fellowships, job boards and mentoring opportunities geared toward helping young professionals launch and navigate their careers. Get involved and never stop networking.

AP: I still regard graduating from Grady College with a Masters in Journalism as one of my greatest accomplishments. After graduating, I expected to work in corporate communications or at a public relations agency. When I took an entry-level communications position at a small nonprofit, my career shifted faster than it started. I found myself moving more and more into the world of nonprofit management. Even with that shift, the foundation that Grady College gave me in journalism, public relations, branding, crisis communications, event management and ethical corporate social responsibility, has helped me become a successful catalyst for change. Finding my way into a role working in association management alongside LGBTQ journalists just seems kismet and is the current peak of my professional accomplishments.

GC: Any other comments?

AP: We are often asked what the state of LGBTQ news coverage is in the United States. The short answer is, we’re doing better than we were 50 or even 30 years ago. We’re seeing fewer mistakes in coverage, specifically surrounding lesbian and gay people. Reviewing increasing numbers of submissions to our Excellence in Journalism Awards, we see that coverage of the community is improving, not only in big cities, but also in smaller towns. We see that journalists are holding themselves accountable to produce fair and accurate coverage.

But as the base of knowledge around lesbian and gay people has grown, it’s becoming obvious where the gaps in knowledge and coverage lie. It has shown us where we still need to focus our efforts and programs. For instance, the most questions we get about coverage are around stories relating to transgender and nonbinary people. The transgender community faces much higher rates of violence than their cisgender counterpoints. Even in that group, transgender women of color are disproportionately affected. But beyond the mistakes, those critical stories are all but missing in coverage.

It is critical that we properly report how people identify and avoid perpetuating damaging narratives.

Every fall, audiences gather for Out On Film, an 11-day, in-person and virtual film festival annually featuring more than 150 films by, for and about the LGBTQ community and its allies. The director of the festival is none other than Jim Farmer (ABJ ’88), who oversees the programming and scheduling of Out On Film, while also working with filmmakers and talent attending the event.

Following is a brief interview with Farmer.

GC: What clubs and activities did you participate in at UGA and Grady that were instrumental to your success?

JF: I was in Cinematic Arts, which handled film programming for students at the Tate Student Center. I wrote about the arts for The Red & Black student newspaper. I served as president of Di Gamma Kappa broadcasting fraternity. I was also a student judge for the Peabody Awards.

GC: What does LGBTQ Pride Month mean to you?

JF: For me, Pride Month is a time to remember and honor all of the LGBTQ pioneers who have made our lives today possible and celebrate everyone for their diversity and uniqueness, while also remembering that we have work to do still.

JF: That is a tough question. Today’s workplace is different than when I first entered it. I took a job many, many years ago for the salary but had to remain closeted. It was in a Georgia county that had a history of LGBTQ intolerance. When I did come out, I was fired a few months later for “my job performance.” I vowed never again to take a job for the money and to find a place where I could be comfortable. Luckily, I have been able to do that. My advice is to find out everything you can about the company, your colleagues and the climate beforehand and make a decision accordingly. It’s obviously important to find a job that allows you to make a good living, but it’s also important to be in an environment that respects you for who you are. 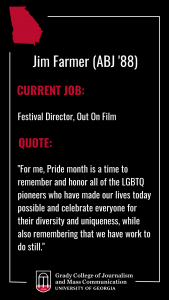 JF: I’m old, so I have several! I am proud of what my team with Out On Film has accomplished over the years, the support we provide filmmakers and that we have grown into an Oscar® qualifying film festival. I am an arts reporter as well and proud of the stories I get to write and cover every week. Most of all, I feel lucky to continue doing what I started doing during my UGA days, do it professionally and be happy doing exactly what I want to be doing.