Why did you choose Grady College and the MFA program?

Up until COVID-19, I was on the advertising career track, but I often regretted not committing to the Entertainment and Media Studies major in undergrad. Film and television have always been what I’m most passionate about. Ten different people sent me the article about how UGA was starting an MFA program in film, television and digital media in December 2019. I decided to throw my application in and didn’t think much about it as I started pursuing advertising jobs before graduation.

March came along, and I think we all know what happened after that. I actually received my admittance letter the day that UGA announced that it would be closing for two weeks. Even though that day was incredibly scary and hectic looking at the future, I felt strangely calm. I knew that I needed to trust my gut and, as cheesy as it sounds, follow my dreams and do the program. After all, life is too short to not wake up every day to something you truly care about.

It’s been such a wonderful experience thus far–from the professors, the hands-on experiences and my incredibly talented classmates–and I’m so happy I chose to do it. I feel so lucky to have called The University of Georgia my home for four and a half years now. 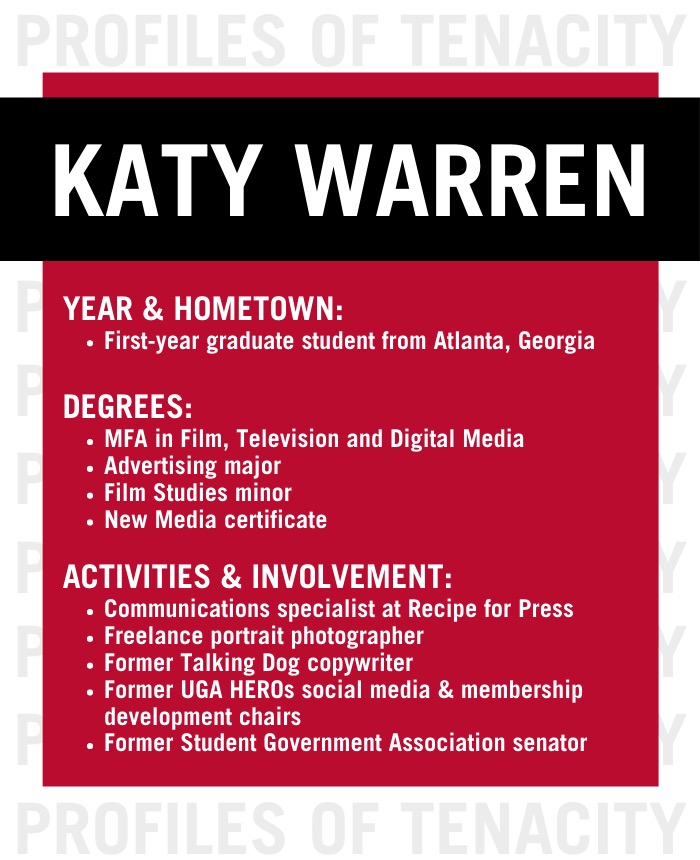 I just finished “Breaking Bad” and can confidently say it’s easily one of the best television series ever made. The story structure, character arcs and writing is phenomenal. I’m now watching “Better Call Saul,” which is a prequel to the series. I’ve binge-watched some other amazing television series this year: “Succession,” “The Queen’s Gambit,” “West Wing,” “The Marvelous Mrs. Maisel” and “Watchmen.” They’re all very different, but I can’t recommend them enough!

Merriam Webster describes “tenacity” as … just kidding! To me, tenacity isn’t just about being determined. It’s more than that. It’s about being fearless in pursuing what sets you apart from the rest or what makes you special. I can’t believe I’m about to say this … but as one of my favorite films, “Ratatouille,” once said, “Anyone can cook, but only the fearless can be great.”

I was fortunate enough to attend the Cannes Lions Festival of Creativity as a study abroad trip in June 2018. It was so wonderful to be surrounded by so many passionate, inspiring creatives. Getting to hear lectures on yachts in the French Riviera was also a nice touch.

Fun story: We were all assigned papers and were encouraged to reach out to attendees to interview them. I ran into Akon (casual, right), and he was more than happy to answer a few questions about my topic. It’s not every day you get to hang out on stage with Conan O’Brien, but that’s a story for another time.

I’m passionate about telling people’s stories. At the end of the day, our stories are integral to what makes us human. They’re what bring people together. Everyone has a unique story that deserves to be told, and I want to spend my life making sure that they’re heard by taking noteworthy, artistic visions from page to screen. I hope to inspire and ignite emotions in others, as other artists have done for me.

Don’t worry, I won’t quote “Ratatouille” for this one. “The world will break your heart ten ways to Sunday, that’s guaranteed. And I can’t begin to explain that – or the craziness inside myself and everybody else, but guess what? Sunday is my favorite day again” -Matthew Quick, “The Silver Linings Playbook”

What is your most memorable experience in the MFA program?

Our cohort took a trip to Trilith Studios, where we’ll be living and taking classes next year. We got to see some incredibly high-tech, film equipment and editing bays.

It was so surreal seeing the sound stages and knowing that we’ll be living right across the street from them in just a few months! Then came the grand finale: going to Truett’s Luau and having “The King’s Feast.” I recommend the tropical chicken nuggets and frosted pineapple drink if you ever get the chance to go. That day was also special to me because I felt as if I was truly starting to get to know the other members of my cohort.

Is podcasting a hobby? Well, it is for me. I started a movie and television podcast with my good friend and fellow Bulldog alumnus, Lee Collier (BBA ‘20), this summer. If you enjoy listening to two people screaming their unsolicited film takes, you should give Six Beers Under a listen!

What is a noteworthy piece of advice you’ve received from an instructor, mentor or family member?

I’ve learned so much from my phenomenal screenwriting professor, Neil Landau, this semester. One lesson that has really stuck with me is that, “Vulnerability is a strength. It shows empathy. Vulnerability brings us closer.” Before, I always thought of vulnerability as a flaw. Now, I believe that learning to gracefully accept and own one’s vulnerability is one of the bravest things that we can do.

In a perfect world, I would start my day at Mama’s Boy with an iced coffee, banana bread for the table–it’s a game changer–and a chicken biscuit. After years of searching, this is a top-three biscuit for me! For lunch, it’s time to head to Cali n’ Titos for the Lumpkin Lunch Special: the chicken Cubano milanesa with extra pink sauce. The grand finale for dinner is … drumroll please … Trappeze Pub! I’m incredibly loyal to their turkey and swiss sandwich with fries and raspberry ketchup. At this point, I definitely didn’t leave room for dessert, but a Cook Out milkshake would suffice if needed.

The #ProfilesOfTenacity series is a set of student features highlighting the strength, determination and leadership of students in Grady College. Stay tuned to see how #ProfilesofTenacity evolve in the future.