Join GSPA and its members from across the state in celebrating the best in high school journalism of the GSPA at the 2019 GSPA Spring Awards. The event will be held at the University of Georgia Center for Continuing Education & Hotel on Tuesday, April 9.

This year’s event combines favorite elements from awards celebrations over the years.  It will begin with a morning conference focused on professional development from 9 a.m. to 11:30 a.m., and will conclude with a banquet-style awards luncheon, catered by The Georgia Center, starting at noon. Professional dress is suggested.

We hope you’ll join us for this special day honoring all of your hard work and a major milestone for GSPA!

Registration will be open early February. Attendance is free for advisers and $25 per student. 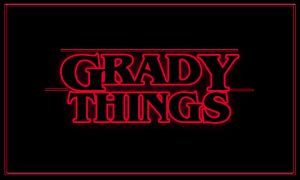 The Media & Leadership Academy at Grady College, June 3-8, 2018, is an intensive residential program focused on experiential learning. This program is open to rising high school sophomores to seniors interested in the mass communication field.  Incoming UGA freshmen who intend to study at Grady College are also eligible to attend.

You won’t want to miss out on the fun with this year’s theme: Grady Things.

Lucia Bermudez, co-editor-in-chief of Odyssey Media Group at Clarke Central High School in Athens, Georgia, has been named the 2018 Georgia Champion Journalist by the Georgia Scholastic Press Association at Grady College and the Journalism Education Association. The award recognizes the top high school senior journalist in the state.

The winners were selected from a pool of 11 entrants, each with portfolios packed with academic achievements and journalism accolades. Portfolios were scored in the following categories: candidate background; news gathering; writing; editing; design; multimedia broadcast; photojournalism; web; law and ethics; leadership and team building; news literacy; entrepreneurship; and candidate reflection.

The nomination of Bermudez included comments about her ability to recognize the unique power she possesses as a Latina journalist, “evident in her journalism work and in the various ways she speaks up for her community to ensure they have a voice.”

Bermudez demonstrates a commitment to her community that extends beyond the pages of the Odyssey. She tutors students at Clarke Middle School. She serves as vice president for her school’s Hope Club (Hispanic Organization Promoting Education), organizing fundraising projects and monthly meetings. She is co-president of her school’s Interact Club, which runs an annual event – DreamFest – to promote awareness of undocumented students in the community. She also founded the Latinx Student Union at her school, an organization that celebrates Latino culture and promotes volunteerism.

Bermudez will receive a $100 prize and be recognized at the GSPA Workshop and Awards April 17, 2018.  She also moves on to represent the state in the Journalism Education Association’s National Journalist of the Year competition.

In addition to the senior Georgia Champion Journalist of the Year, the GSPA honors the top high school junior journalist in the state. Ana Aldridge was named the junior winner and Valeria Garcia-Pozo was the runner-up. Both are on staff with the Odyssey Media Group.

Sophie Fernandes, a senior at Clarke Central High School in Athens, Georgia, has been named the Georgia Champion Journalist by the Georgia Scholastic Press Association and the Journalism Education Association.

Fernandes has been involved in Clarke Central High School’s Odyssey Newsmagazine since 2014. She has served in a variety of capacities including managing editor, photography editor, visuals staff member and viewpoints writer. She is a member of the National Honors Society and has received a number of awards for her photography and writing, including the Georgia Scholastic Press Association’s Junior Champion Journalist presented last year.

The nomination of Fernandes noted that her photography frequently includes “unique compositions and vivid sense of energy and emotion,” while her writing exhibits a “mature style and developed voice.” She also “shows both self-awareness and thoughtfulness in leading others.”

The Georgia Champion Journalist runner-up, Ritter, has been involved with Decatur High School’s news magazine Carpe Diem since 2013. She has served as design editor, copy editor and writer. Ritter is a member of the National Honor Society and is involved with mock trial, student government, marching band and varsity golf. In 2015, she was selected as a participant for the Governor’s Honors Program for English/Communicative Arts, a program that selects the top 1% of students in the state.

Ritter’s nomination included comments about her “enormous initiative in covering complicated issues that affect her community” and her ability to push herself to develop professional skills, including shadowing reporters at The Atlanta Journal-Constitution in her spare time. The nomination added, “her photography shows great skill in capturing the right moments to tell a story; her reporting shows an innate understanding of journalism, down to AP Style; and she shows leadership in encouraging other reporters through her editing.”

Fernandes will compete against the other state winners in the national level. Winners will be announced at the JEA/NSPA convention’s concluding awards in Seattle, Washington.

GSPA received five top-notch submissions for the coveted award for the 2017 competition.

Fernandes and Ritter will be recognized during the GSPA Workshop and Awards event on April 24, 2017.