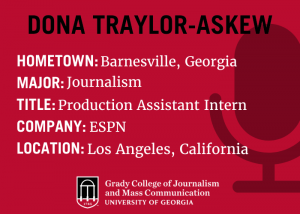 Briefly describe your internship and your responsibilities:

My internship was 10 weeks. I spent the first five weeks on Sportscenter and the second five weeks with NBA Today. I was responsible for cutting clips for the shows. Most days I was assigned other jobs along with cutting clips, such as running the teleprompter, sorting scripts for on air talent, or organizing highlight shot sheets. I also had the chance to observe most of the positions necessary to bring a studio show together including the producer, director, graphics producer, research assistant and the technical director.

What is the most valuable lesson you’ve learned?

The most valuable lesson I learned during my internship was to always ask questions. At first, I was tentative about always being the one to ask for clarification or further explanation. There were so many moving parts to the shows I was working on that I always wanted to know how and why things worked the way they did. I felt like everyone would be so tired of having to explain to the intern, but I quickly learned that they were always excited for me to ask questions. Instead of finding it annoying, they found that it showed my genuine interest and engagement.

This role showed me that I have a greater appreciation for the content production side of broadcast than I originally thought. During my time in Grady, I have enjoyed creating feature packages, conducting video interviews and related tasks, but I think in the back of my mind, an on-air role was still at the forefront of my career aspirations. While this is still true in some sense, as I would love an on-air role in some capacity, after this internship. I also think I’d be much more content working in the content side of broadcast to start off.

What has been your favorite part about your internship?

My favorite part of my internship would have to come down to an incredible moment that I will literally never forget. I have been an admirer of Malika Andrews for quite a while, as she is such an inspiration to me as a young black woman in the sports broadcast industry. She is the host of NBA Today, so I had the chance to work with her. In my second week there, my role for the day was to operate the teleprompter. She called me out to set about 10 minutes before we went on air and asked what career interests I have. I explained that I am loving the content production, but that I could see myself in an on-air role one day. She proceeded to ask me to sit at the desk, explaining which camera would be mine if I was her cohost. Then, the two of us went through over half of the show script together like co-anchors. She gave me a couple pointers on small things I could improve moving forward, but commended me on a job well done (especially since she caught me off guard). It was absolutely insane. I couldn’t believe it was happening, and was fully convinced I was dreaming (except there is photo evidence).

How have the classes you’ve taken at Grady prepared you for this internship?

The classes I have taken in the Grady Sports Media Institute couldn’t have prepared me better for the work I’d have the chance to do with ESPN. Hands-on work editing feature packages and learning to take quick direction and think on my feet from classes like Sportsource had me as ready as could be. I think the most difficult adjustment for me was learning where everything was in my new environment, including learning the basic regulations of cutting clips and finding footage, and getting used to a new editing software–which is only used by ESPN. These are all situational challenges. My Grady experiences allowed for utmost preparation otherwise.

What advice would you give to students who are looking to pursue similar opportunities?

My advice to students who are looking for similar opportunities would be to take advantage of every other opportunity they have leading up to this one and always give their best effort. Sometimes, it can feel like the small reporting or video package assignment you have is unimportant. But, this could be the very piece of work that puts you in a hiring manager’s line of sight. Even if a project isn’t perfect, sometimes if it is clear from all perspectives that you really worked hard, that effort will overshadow any imperfections and open the door for other opportunities.

Briefly describe your internship and responsibilities.

As a social media intern for ESPN, my daily duties include creating posts for engagement on Instagram, Facebook, Twitter and TikTok based on what’s trending in sports. I work with my team to discover new viral content and create videos and graphics to share across social media platforms. 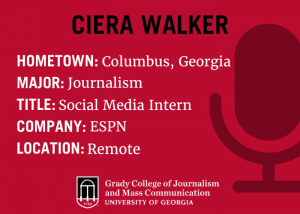 What’s the most valuable lesson you’ve learned so far?

The most valuable lesson I’ve learned so far is to volunteer for extra work outside of my regular duties and responsibilities. I’ve found that when I pitch in to help out with something or ask to help out on a particular project, that both my co-workers and managers are appreciative and take note of those gestures. It gives me the opportunity to connect with other individuals in the company that I might not typically work with and gain different perspectives on what this position totally encompasses. When I ask to help out, it shows that I’m serious about what I do and want to soak up as much experience from this role as possible.

How has this role helped you discover what you are passionate about?

This role has helped me discover what I’m passionate about by allowing me to see my own reactions to certain tasks given to me. When certain initiatives come up or campaigns take place, I find myself growing excited and almost giddy to work on the content that needs to be created. I know that I’m passionate by the response I have for the work that I’m doing. When I end an entire work day still energized and eager for what might come tomorrow, I know that’s only possible because of the passion that’s fueling me.

As I move forward in my career, I want to continue working in social media. This role has guided me towards that by preparing me for what a job in sports social media will look like. This position has shown me different sides of this industry that I had never recognized before and has pointed out the areas that I need to continue developing in order to truly excel in this field.

What advice would you give to other students who are looking to pursue similar opportunities?

The advice that I would give to students looking to pursue similar opportunities is to always take the risk, because you never know what might come from it. Originally, I was skeptical about applying for this internship because I was worried that I wasn’t qualified enough for it. I thought maybe I hadn’t done enough or didn’t have enough experience to be considered. However, I took the risk, applied, and placed confidence in myself to know that I was capable of working in this role. Many students miss out on amazing opportunities because they count themselves out before ever trying. My advice is to never walk away from an opportunity because of a fear or doubt that you’re not enough.

What has been your favorite part about your internship so far?

My favorite part of the internship so far has been getting to create content for major sports events including the NBA Finals, the NBA Draft and the Title IX project. I love seeing the vision that the team creates come together and the reaction that fans have to the work that’s been done. It’s fun to see certain Instagram posts or TikTok vides pop up on my own social media accounts from ESPN that I worked on and created.

If you could describe your internship in only three words, what would they be?

A University of Georgia student just marked the one-year anniversary of her podcast with a live audience on May 13. Rising junior advertising major Ally Fleming launched the “In Timeout” podcast last May alongside her father, David.

In a sea of more than 1.7 million podcasts, ESPN’s only daddy/daughter duo continue to differentiate, develop creative content and drive downloads with contrasting views and a growing fan base. This duo teams up weekly to laugh, talk family, sports and pop culture and celebrated their one-year show live from Lost Worlds Brewing in Cornelius, NC on May 13.

“Stuck in quarantine, when we realized the entire world was also “in timeout” I joked about starting a podcast – a few hours later we posted our first show. It was a blast, but we just did it to help pass the time, honestly, and never dreamed we’d still be doing this a year later,” says David Fleming, senior writer for ESPN. “But the reaction has been so amazing, and we quickly realized a father/daughter duo that can talk Kobe Bryant or the Super Bowl one week, rank Taylor Swift songs the next and then do an Arby’s taste test or a #GirlDad fashion quiz was something totally unique to the podcasting world. And so, incredibly, here we are hosting a live audience for our one-year anniversary show. I just hope it’s not being catered by Arby’s.”

Today, the In Timeout podcast is in the top 15% of the more than 100,000 shows on the host site Buzzsprout and is approaching a thousand downloads per month, from Australia to Japan and Germany and throughout the U.S.

“Some of my favorite episodes we record are the spontaneous ones,” says Ally Fleming. “A memorable moment was texting my dad about the new Britney Spears documentary, and in less than 24 hours, we recorded a whole episode covering it.”

“I could see us never running out of ideas to talk about. That’s why I love recording this podcast so much, it never gets boring,” Ally Fleming says.

About In Timeout podcast

In Timeout Podcast, started in the midst of the global COVID 19 pandemic, is a sports podcast like never before. ESPN’s only father/daughter duo, David and Ally Fleming talk sports, pop culture and family. Episodes vary from reviewing the latest Britney Spears documentary to covering Dave’s newest project on ESPN. In Timeout can be found on Spotify, Apple Podcasts or anywhere you listen to podcasts. Listen to a sample episode: