Producing the only video broadcast that Athens-Clarke County residents and those in surrounding counties will see for local Election Day news is no small task in normal times. During COVID-19, the stakes are even larger. 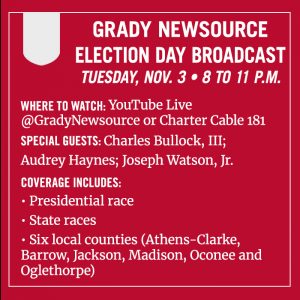 “This is the first major election we or any other newsroom has ever done under these pandemic circumstances. Maybe we say at every election that ‘it’s never been more important,’ but it may not be spurious to say it this time,” said Dodie Cantrell-Bickley, a senior lecturer at Grady College and executive producer of the student-led group putting together this show.

The students, many of whom are journalism and entertainment and media studies majors but who draw from several other majors across campus, are producing a three-hour Election Day show from 8 to 11 p.m. on Tuesday, Nov. 3.

Many of the participating students are taking the capstone Grady Newsource class, or are volunteering for the special “Countdown: Election 2020” broadcast which started last spring and has continued throughout the fall.

“This is one of the most important things I am doing this year,” Nikki Shotz, a fourth-year journalism student and volunteer for the production crew said. “It is extremely crucial to help inform people.”

The Election Day coverage will report on the races and results of local races from six counties — Athens-Clarke, Barrow, Jackson, Madison, Oconee and Oglethorpe — as well as state races and the presidential vote. The students will work closely with the Board of Elections offices in each of the six counties, as well as the office of Brad Raffensperger, the Georgia Secretary of State.

A highlight of the evening will be the expert commentary provided by three guests who will be in the studio providing real-time analysis throughout the broadcast. Those guests include:

Pre-produced stories on topics like elections in the digital age and the impact of misinformation/disinformation will be augmented by tracking of social media updates on a smart board and keeping a watch for issues like voter suppression or long lines at the polls.

The election night coverage is directed by Sam Daniel, a senior journalism major who is working on the show as an independent study before his December graduation.

Helping Daniel produce the show is Molly English a fourth-year journalism student. “I feel so blessed to be here during an election year,” she said. “And, to be able to actually come in and see people face to face and interact with them in a way that’s not over Slack or Group Me feels great.”

In between Cantrell-Bickley’s traditional advice that the students don’t need to be first to announce results, but they have to be right, she sprinkles in new advice about always wearing face masks unless they are on air and making sure their station is wiped down before moving on.

“We consider this show to be a community service, but more importantly, we are here to educate these students,” Cantrell-Bickley concluded. “This is such a great opportunity for them because at the end of the day, to be able to say you worked on an election night show during a pandemic is going to be saying something.”

Viewers can watch the Election Day coverage on Nov. 3 from 8 to 11 p.m. through YouTube Live on the Grady Newsource channel and on Charter Cable 181.