Fifty years ago, in the fall of 1971, five football players joined the Georgia Bulldogs football team and became the first Black scholarship football players in school history. Richard Appleby, Chuck Kinnebrew, Horace King, Clarence Pope, Larry West and all they collectively represented are the subjects of a new documentary produced by Grady Newsource.

“The First Five” is now available to watch on Grady College’s YouTube channel.

The production is a result of months of work from students, faculty and staff. Grady Newsource director Dodie Cantrell supervised the project.

“The students who chose to work on this historic project understood and honored the fact that the work they were producing was a once in a lifetime opportunity to memorialize a watershed moment in American history through the lens of UGA football and the Civil Rights Movement,” said Cantrell.

“In addition to all of the technical skills and journalism tips I learned, I also learned most to sit and listen,” English said. “There were five major stories that we had the responsibility of telling and of telling right. Sitting and listening to those stories, from both the First Five and those they inspired, allowed our team to be able to tell this story fully.”

The students relied heavily on Faculty members Vicki Michaelis, Mark Johnson, Amanda Bright and Valerie Boyd —their “Content Coaches”—who worked with individual students to help them advance the skills they learned at Grady to tell this compelling story honoring the lives of those who lived it.

“The First Five” is the latest documentary produced by Grady students celebrating the pioneers and trailblazers who helped make UGA a more inclusive campus. Earlier in 2021, Grady Newsource produced “UGA’s 60th Anniversary of Desegregation” special. There are plans for more documentaries in the near future.

The documentary is part of a campus-wide celebration. Included in the celebration will be a pregame recognition of the five trailblazers on Dooley Field, including the unveiling of a monument in Reed Plaza next to Sanford Stadium to mark the milestone event of the integration of the football program.

“I am so thrilled to welcome The Five back to campus and honor the 50th anniversary of this milestone for Georgia Athletics and the University of Georgia as a whole,” J. Reid Parker Director of Athletics Josh Brooks said. “Coach Dooley, with his foresight to facilitate this pivotal change, and The Five’s courage, strength and perseverance, changed the course of athletics at UGA in the most positive way imaginable. I am so proud to celebrate their impact this year.”

You can read more about the First Five in this release from UGA Athletics.

For more information on The Five and the integration of UGA athletics overall, you can visit a new exhibit on display at the Russell Building Special Collections Libraries called Not Only for Ourselves: The Integration of UGA Athletics. Parts of the exhibit are also available online: https://gado.gs/7j8.

Join us for the documentary premiere of “American Exploitation: The Slaves Among Us.” Documentary producer John R. Carter and audio editor/mixer Jeff Sliney will be in attendance.

“American Exploitation: The Slaves Among Us,” focuses on the complex, subversive nature of sex trafficking and the efforts of social advocates, law enforcement agencies, state legislators, and victims turned-heroes to effectively eradicate the volatile system from the idyllic area of southwest Florida and create lasting change in the world.

After the film, Carter and Sliney will talk about the process of making “American Exploitation” and engage in a discussion with the audience.

They completed their film in Spring 2017 as part of the course requirements of EMST 5270, “Documentary Production,” taught by Melissa Jackson.

Rickey’s Story from Stories from the Line on Vimeo.

The film portrays Athens, Ga. resident Rickey Morris. After getting sick, losing his long-term trucking job and falling into homelessness, today he’s taking care of his health and working to get back on his feet.

“I can’t be more proud of the crew and the course instructor,” said Dr. Jay Hamilton, Head of the Department of Entertainment and Media Studies. “It’s amazing how they created and produced a short documentary of this quality in the process of learning the fundamentals of documentary filmmaking.”

In addition to documenting how Morris is turning his life around, the student crew also overcame their own challenges in documentary filmmaking. Dimitrova commented on the need for “maintaining flexibility while shooting on location, and crafting a coherent and compelling story arc through the editing process.”

“These students honored their interview subject’s story ethically and journalistically,” said Jackson. “They learned valuable production and life lessons that they will carry into future careers as documentarians.”

Leonard agreed. Morris’s “resilience and determination to get back on his feet was one of the most inspiring experiences of my life, and solidified the kind of stories I want to tell moving forward as a filmmaker.”

A short documentary that started out as a class project won First Place in the Documentary Category at the 2017 Georgia Communication Association Student Film Festival.

The winning documentary, “Michael Davenport: The Armless Artist,” provides a sympathetic portrait of Davenport, an Athens, Gerogia resident who lost both hands in an accident but who recovered and has thrived as a visual artist.

A total of 41 entries from 13 universities throughout Georgia were submitted to the festival.

Their work was guided by Stephen Bridges (ABJ ’06) as part of EMST 4250 in Fall semester 2016. Bridges was a temporary part-time instructor and is an instructional designer/lead media producer for the Office of Online Learning at UGA. 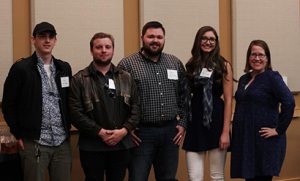 Bridges said how “incredibly proud” he is of the students involved with this project. “Lindsey and her group tackled this task with an admirable work ethic and emerged on the other side of the course shining brilliantly,” he added.

Smith recalled how “that guy who draws with his mouth” remained a mystery to her and so many other Athens residents.  Upon meeting him last fall, she decided “he had a story that needed to be told.”

After surviving a tragic accident at age 13, Davenport had to adapt to life without his arms.  Unable to draw even a stick-figure before his accident, he found a passion for drawing with his mouth and has been a local inspiration for decades.

Smith said how grateful she is for “my crew, for all the support received from friends, family and faculty and for the Georgia Communication Association” for hosting the competition.